What Does English Sound Like To Italians? This Pop Song

For most English-speaking Americans, the impression European languages leaves with them have been either romantic, vivacious, lyrical, unrelenting… you know how it goes, the general cadence and sound of the language spoken shows its own unique undiluted personality.

If that’s the case, then what kind of personality does American English have?

This Italian pop song might shed some light on it.

Fantastic! Now… just what was that song all about? 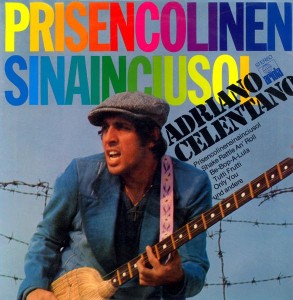 “Prisencolinensinainciusol” (try saying that in one breath) was a pop song conceived and written by Italian singer Adriano Celentano in order to mimic how American English sounded to Native-Italian speakers. It was released in 1972, and occupied the top spot on the charts not just in Italy, but also in neighboring countries  such as Germany, France, Belgium, and the Netherlands. (I guess because of the collective sentiment?)

“Ever since I started singing, I was very influenced by American music and everything Americans did,” Celentano revealed during a 2012 interview with All Things Considered. “I thought that I would write a song which would only have as its theme the inability to communicate. And to do this, I had to write a song where the lyrics didn’t mean anything.”

We’re digging this 70’s rock anthem with a dash of Elvis Presley on the side, and it does serve to be an interesting insight on how the another part of the world hears American English. Look, this is a far cry from Simlish; Celentano’s impression in “Prisencolinensinainciusol” is amazingly convincing, it’s got some of our brains deciphering what the nonsense in the lyrics might actually mean. You’ve got a smattering of “alrights” and “babies” thrown into the mix, which adds to its own unique flavor.

Such a linguistic tease, this song.