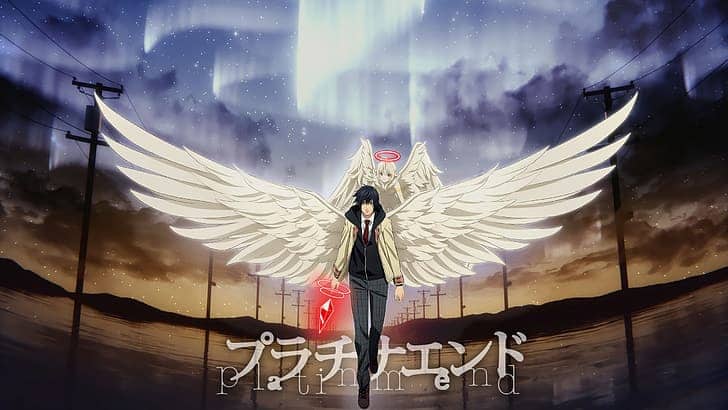 If losing his family wasn’t enough despair for Mirai Kakehashi, it further deteriorated by the hell his relatives put him through. After not being able to cope with it, Mirai decides to take his own life only to be saved by an angel named Nasse.

Nasse gives him two special powers and tells him that he is now part of a battle between 13 individuals and the winner will get to be the next god. In this article you will find other anime that cover the similar battle royale theme of Platinum End.

Yuki is a school student whose best friend is his sole diary. He shares every minute detail with it and treats it almost like another human. Everything was going fine until the day he suddenly sees that his cell phone has been filled with diary entries.

Although he decides to ignore the entries, it seems to pass word by word that forces Yuki to take notice of it. Without realizing anything, he suddenly finds himself in a death game where he has to survive until the end and become the Lord of Time. Just like Platinum End, Mirai Nikki is a battle royale anime.

Darwin’s Game is an anime whose title takes inspiration from Darwin’s theory of survival of the fittest. The plot is also based around that theme where Kaname Sudo acts as the mysterious character. One fine day he gets a weird invitation asking him to open an obviously suspicious looking app.

He is brought into a new world along with many other victims of the same app. They all get some sigils which grant them superpowers and those very powers will be used by then to eliminate each other. It won’t be a walk in the park as there are many seasoned fighters present in that tournament. Similar to Platinum End, the characters of this story are literally fighting for their lives.

Light Yagami is a brilliant student who was going about his usual school life. One day he looks outside his window to find a Death Note lying on the ground. As soon as picks up the Death Note, he comes in contact with a Shinigami who is the original possessor of the Death Note.

It has the power to kill anyone whose name is written on it. Light soon starts using it in the name of justice to kill off all the criminals. But the power consumes his sense of self soon enough and he becomes obsessed with it. Like Platinum End, we find a supernatural being granting a normal boy with insane powers.

You may think that you go to either heaven or hell after you die, but it is not quite so simple. In the world of Death Parade you will find yourself in Quindecim where the bartender, Decim decides the fate of the souls. They can either be given a second chance at life or be banished from it for all eternity.

Decim is a bartender in that place where simple games will determine the outcome of the people stuck there. But an unknown lady changes everything as the very base of Decim’s system comes under question. If you love Platinum’s End, you will also like Death Parade as the survival is based on a game.

What will be your first reaction when you will wake up to find yourself in a new world? You are likely to panic, which will be the natural reaction to such an event. Three friends are also faced with the same predicament with a completely unknown world awaiting their presence.

But they don’t get any time to come to terms with their surroundings as their survival depends on a number of deadly games. The friends soon realize that this is no matter of joke and they must plan every move with caution as their life and death only hangs on a thread. Both these anime have survival games as the key plot in the stories.

More Anime shows to watch if you liked Platinum End: