11 Anime Movies Like I Want To Eat Your Pancreas 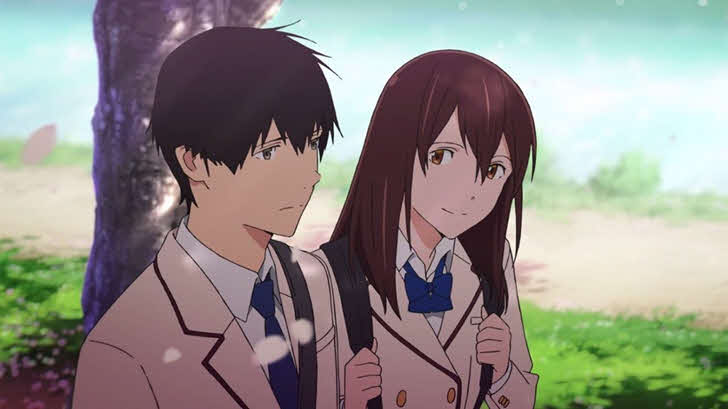 I want to eat your Pancreas is a heart-touching story surrounding a youthful girl named Sakura Yamauchi. She is suffering from a terminal disease in her pancreas and hasn’t got much time left in this world. In comes the aloof male character who hasn’t got any interest in the people surrounding him.

But despite giving Sakura the cold shoulder at first, he gets caught up in her daily journey. This anime shows us a story about two completely different characters who get completely intertwined with each other’s’ lives. If you are looking for anime movies similar to I Want to Eat Your Pancreas then you have come to the right place.

Best Anime Movies Similar to I Want To Eat Your Pancreas:

1. A Silent Voice (Koe no Katachi)

Shouya Ishida was like a wild stallion in his elementary school days. He resorted to bullying for fun and even the deaf Shouko Nishimiya wasn’t spared from his clutches. It forces her mother to notify this event to the authorities which leads to all the blame falling on Ishida.

Rest of his elementary school life is plagued with loneliness as Nishimiya ultimately transfers out to a different school. Many years after that, Ishida decides to go on a journey of self-correction and seeks out Shouko in order to correct his past mistakes.

Just like I want to eat your Pancreas, this story involves a male character who fails to understand the troubles of the female protagonist.

2. Josee, the Tiger and the Fish

Tsuneo Suzukawa is a university student who is somehow managing both his college life and part time job together. He has an aim to study marine biology abroad and he needs to save up for that. While looking for a job that pays more, Tsuneo becomes the caretaker of Josee.

She is a girl in a wheelchair whose first impression is not that great on him. But as the two spend more time together, Tsuneo realizes that they have common goals in their life. They can make each of their dreams come true by cooperating with each other. Both these anime are centered around a common theme of romance involving a disabled character.

Yuu, Haru and Kotona are three school students who are very close to each other. Everything was going smoothly for them until one day Kotona got stabbed by a strange man. While trying to take her to the hospital, the boys get hit by a truck but seem unscathed by it. They are even more shocked to find themselves in a magical kingdom full of diverse creatures.

That place seems to have a magical effect as Yuu also gets healed somehow and doesn’t need to use a wheelchair anymore. Their frantic search for Kotona also leads them to another surprising revelation where the princess of that kingdom also looks exactly like her. If you like I want to eat your pancreas, then you will also love Ni No Kuni as both of them are bittersweet love stories.

Hinako is a young girl who is still in college. She moves into a town by the seaside which absolutely complements her love for surfing. But one day her building catches on fire suddenly and a handsome firefighter by the name of Minato rescues her. The duo doesn’t take long enough to fall in love and it becomes the happiest of times for Hinako.

But it doesn’t last long and Hinako loses Minato in a tragedy. Distraught by that incident she grows apart from the sea before again finding her lover whenever she sings their song. Now she can summon her in any body of water and rekindle their old love. Similar to I want to eat your pancreas, this anime consists of a romance that ends in death.

5. When Marnie was There (Omoide no Marnie)

Anna is a budding artist who is very shy in her nature. One day she goes to visit the place of her aunt and uncle where she comes across a pretty worn down building. Marshes are growing around it and a mysterious girl finds her way to Anna. Her name is Marnie and the two of them hit it off quite well.

As the days go by not only does their bond continue to grow strong but Anna is also strangely attracted to that mansion. Perhaps it holds a lot of clues to the mysteries surrounding her new friend. What will Anna discover at the end? Both of these anime are based on a common tragic theme where someone encounters a terrible loss.

More Anime to watch if you liked I Want To Eat Your Pancreas:

6. Your Name
7. Five Centimeters Per Second
8. Weathering With You
9. The Garden of Words
10. The Anthem of the Heart
11. From Up on Poppy Hill