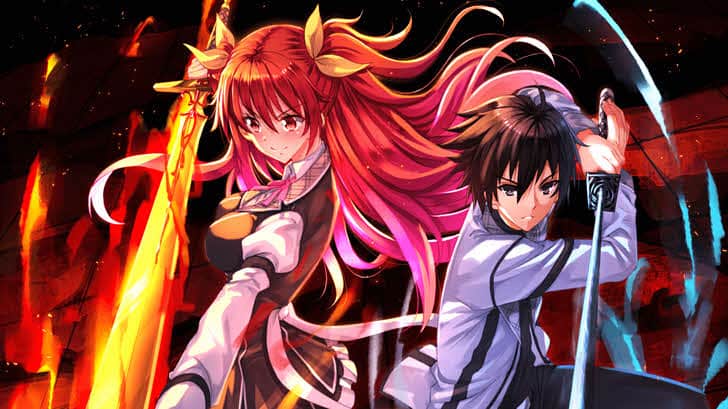 The core of this anime is about some blessed people who can manifest weapons from their souls. They are known as Blazers and they attend a very famous school in order to polish their skills as Mage-Knights. There is only one F-ranked Blazer known as Ikki Kurogane who unfortunately sees the mighty Stella without her clothes.

Stella then challenges him to a duel with the loser becoming the slave of the winner. Chivalry of a Failed Knight is a story about a supposedly weak magic knight who shows his real power to everyone. You can find our list of recommendations for the anime similar to Rakudai Kishi no Cavalry below.

Best Anime Shows Similar to Chivalry of a Failed Knight:

In the 20th century an unforeseen disaster by the name of Invertia caused widespread chaos in the world. Despite widespread destruction, the only silver lining is the mana found within those meteors that helped technology to advance a lot.

Along with the technology a new group of people were born with special powers who were trained in specific academies. It even became a major attraction for people all over the world as the battle between them became a popular spectacle. Both these anime are based on a magic school with a boy and girl as the main characters.

Kazuma had been banished by his own family as he was unable to properly perform their family magic. After serving the years in exile, he made his return only to find out that his family is under serious threat.

This is his chance for redemption as he can use the Wind Magic he learned in all those years and protect his family. He teams up with two other members of the Kannagi household and takes on a challenge to clear his name. If you like Chivalry of a Failed Knight, then you will also love Kaze no Stigma as it is based on fantasy in a modern world.

Tooru Kokonoe gets into Koryo Academy, a school specially made for people like him. He belongs to those groups of kids who can produce weapons directly from their souls. The most interesting thing is that Tooru is fueled by revenge that led him to this academy.

A terrible thing happened to his family that turned his life upside down. Even more surprising is the fact that Tooru’s weapon turns out to be a shield instead of the usual sword. Similar to Rakudai Kishi no Cavalry, this anime is about characters who can manifest weapons from their souls.

Arcadia Kingdom is in ruins and a new empire has now taken its place. Its name is Atismata and it has come up with a perfect plan to protect itself from future attacks. The training of Drag-Knights was started in full force and they were tasked with the control of Drag-Rides.

Meanwhile, the prince of Arcadia happens to see Lisesharte Atismata naked which prompts her to challenge him to a duel. Just like Chivalry of a Failed Knight, the story in this anime starts off with the male protagonist seeing the female protagonist naked.

5. The Familiar of Zero (Zero no Tsukaima)

The familiar of Zero takes place in a magical world surrounding Louise. She studies in a magical academy and is at rock bottom in terms of talent. This is why when she was tasked with summoning a familiar; she calls forth a real living boy all the way from Japan.

In a strange turn of events, the boy starts to live with Louise as the duo form an unlikely relationship and try to help him get back to his home. Both these anime involve a character who starts out weak but slowly shows their true potential.

More Anime shows to watch if you liked Rakudai Kishi no Cavalry: