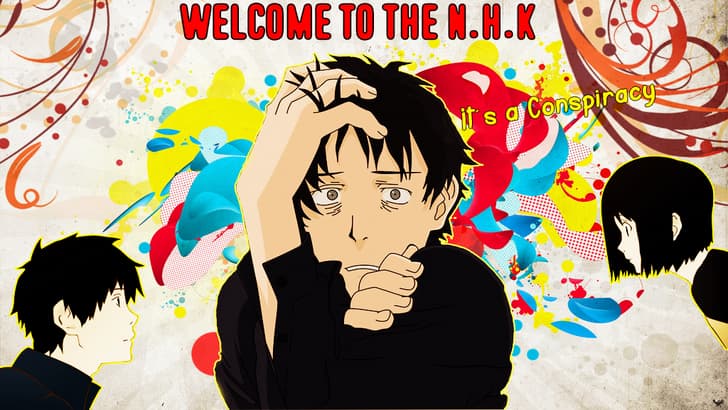 Tatsuhiro Satou is a college dropout who has been living the life of a hikikomori for many years now. He is 22 years old and his NEET status doesn’t help his cause either. Strangely he believes in a conspiracy theory that all his problems are caused by an evil organization called NHK.

Best Anime Shows Similar to Welcome to the N.H.K.:

This story starts off with a sudden meeting between a lonely third year student and a strange man with a head like an eggplant. Apparently this mysterious character is the god of matrimony which contradicts everything the third year student has done for the past few years. He devoted his time in causing the breakup of couples which results in him regretting what he has done.

As soon as he has this thought in his mind, he is instantly transported to the start of his college years where he will get another chance to rectify his mistakes. Both Tatami Galaxy and Welcome to NHK focus on a college student who has messed up badly and is now trying to compensate for his mistakes.

Steins;Gate is a highly rated anime about a genius but kind of mad scientist named Okabe. He has partnered up with Mayuri and Daru to establish a lab where they engage in various quirky inventions. After being involved in a lot of useless inventions for a long time, he finally comes across the phone microwave which has the power to send messages to the past.

Without knowing Okabe and his gang gets involved in an epic adventure that is sure to blow the mind of the viewers. Just like Welcome to NHK, we are presented with a quirky protagonist who apparently tries to solve a conspiracy.

A jellyfish enthusiast and an Otaku seem like a strange mix. But Tsukimi is certainly playing that role perfectly in Princess Jellyfish. She has a tribe of her own with fellow friends who engage madly in nerdy stuff. But just like every other story, their peaceful gathering is interrupted by a beautiful girl, Kuranosuke who turns out to be a man.

Although Tsukimi shows that she despises him, he is everything she wants in her life. Will this lead to something that Tsukimi had never predicted before? Similar to Welcome to NHK, this is the story of a NEET who finds social interactions difficult.

Despite getting a job after graduation, Arata Kaizaki quits after only working there for 3 months. Since he is 27, his parents are not at all happy with his situation. They want him to immediately come back to his hometown. Arata doesn’t have anyone to share his worries with when suddenly he comes across Ryo Yoake.

Ryo is a strange character who runs a rehabilitation center and sends Arata back to school with the help of a mysterious drug. Both these anime revolve around the common theme of a struggling adult who slowly works out his issues.

5. Watamote: No Matter How I Look At It, It’s You Guys’ Fault I’m Unpopular!

High School is a phase of life that we all look forward to in our lives. Tomoko Kuroki is also just like us who has great expectations of her high school. She wants it to be perfect by becoming very popular and being the center of attention of all the boys.

So, she has also made some preparations in her own way by dating around 100 boys. Except they are all virtual video game characters! This is why she is unable to replicate it in her real life and her social anxiety gets the better of her. Just like Welcome to NHK, this story revolves around a socially awkward protagonist.

More Anime shows to watch if you liked Welcome to the N.H.K.: