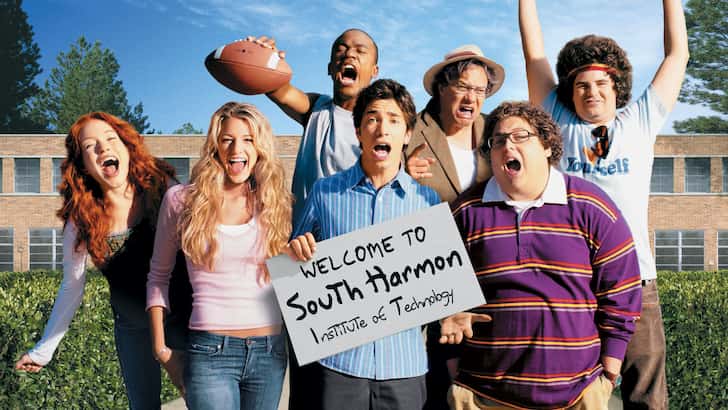 Accepted is a cult classic that uses out-of-the-norm antics to tell a story. The story follows a young man inventing a fake college in the hopes of meeting people’s expectations of college success. As one can imagine, antics ensue and scheming – a bizarre combination of college life and unconventional methods.

Are there other movies similar to Accepted? Good news: There are plenty of movies that are similar!

1. Not Another Teen Movie

First, Not Another Teen Movie takes a stab at the conventions and clichés of school. When Jake Wyler (Chris Evans) accepts a bet to turn nerdy artist Janey Briggs (Chyler Leigh) into prom queen material, antics arise. Though, the antics in this movie are raunchier than what you’re used to in a typical teen movie (hence the movie title).

Released in 2008 film during the hype for Nickelodeon star Drake Bell, College almost follows the same formula as Accepted. In College, Bell stars as Kevin, a high school senior who tags along in college freshman orientation weekend at a university after a nasty breakup with his girlfriend. On the college campus, he gets introduced to the college party scene.

A recent film to come onto this list, seeing that it was released in 2019, Booksmart follows two high school girls looking to make the best out of their high school experience before graduation. The two friends hatch a plan to cram in four years of high school fun into one night. Whether or not they succeed in this scheme is what you’ll have to find out when you watch this great film!

Similar to Accepted, Booksmart is about breaking out of the norm, as two academic – or “booksmart” – girls attempt to have a great time as graduation draws near.

Want more awkwardness in a movie similar to Accepted? Then check out the cult classic Napoleon Dynamite!

This movie follows awkward teen Napoleon Dynamite (Jon Heder), as he befriends the new kid Pedro (Efren Ramirez), as they work together to launch a campaign to run for class president. The movie balances school life with home life, while throwing in scheming and awkwardness into the mix.

Imagine trying to get into a cheerleading camp for the sake of escaping football camp? That’s the premise of Fired Up! Like Accepted, high school football stars Shawn Colfax (Nicholas D’Agosto) and Nick Brady (Eric Christian Olsen) plot to join a cheerleading camp with the hopes of escaping another boring summer at football camp. Eventually, Shawn falls for the head cheerleader Carly (Sarah Roemer), and the boys’ plans soon get derailed.

Throwing an epic party is one theme from Accepted. However, Project X revels in this formula!

Old School follows attorney Mitch (Luke Wilson), who is devastated after learning that his girlfriend (Juliette Lewis) has been secretly participating in group sex.

After moving to a new place to turn over a new leaf, his friends Frank (Will Ferrell) and Beanie (Vince Vaughn) hatch a plan to turn his house into a wild party pad, since it’s near a college campus. This catches the attention of the college’s Gordon “Cheese” Pritchard (Jeremy Piven) and, of course, antics!

And finally, let’s not forget the cult classic – Mean Girls!

A teenager from Africa, Cady Heron (Lindsay Lohan) is sent to an Illinois public school, where she is introduced to the elite clique called “the Plastics.” In the clique, she learns how they gain their dominant status in the school. Like Accepted, there’s plenty of scheming and popularity contests.

Also Recommend: 16 Movies To Watch If You Love Mean Girls

Conclusion: So, there you have it! These 8 films share the same vibe as the movie Accepted! So, get ready for a fun movie night!

Author: Madeline Miller is a writer at Assignment Help. As a content writer, she writes articles about movies, video games, and pop culture.