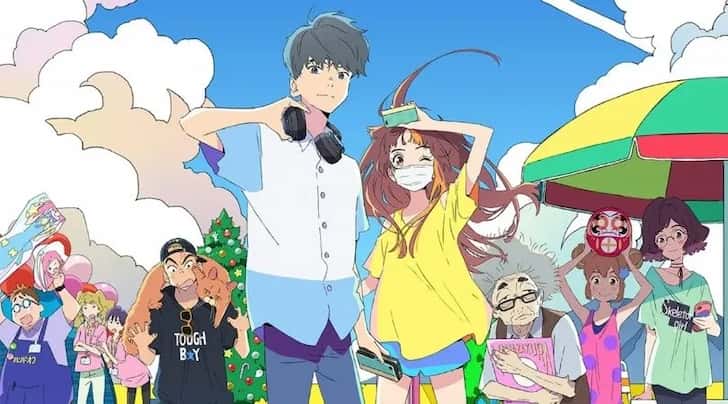 Words Bubble Up like Soda Pop is an anime movie about two characters named Yui Sakura and Yuki Hoshino. While Yui has a unique way of expressing himself through Haiku, Yuki’s specialty is her attempt to make everyone smile.

The two end up working a part time job at the same facility which leads to a wild chase of a lost record. This anime “Cider no You ni Kotoba ga Wakiagaru” will take you on an enchanting journey and if you are looking for a similar vibe, take a note of the recommendations below.

Mitsuha Miyamizu and Taki Tachibana live in the countryside and the main town respectively. A strange incident sees the duo swapping their bodies but they figure it out a lot later. After having fun for a few days, they realize the ulterior motive of this strange phenomenon.

A huge task has been laid on the shoulders of this unlikely duo and the lives of countless people will be depending on them. Will they be able to pull off this near impossible task? Both these anime have a wholesome couple who form a strong chemistry between them and co-operate to complete their assigned job.

Also Recommend: 15 Anime Like Your Name (Kimi no Na wa)

2. The Garden of Words (Kotonoha no Niwa)

Takao Akizuki wants to become a shoemaker in the future and works very hard in his classes. But one day, he decided to skip them and goes to a garden to draw some sketches. In that garden he meets a beautiful woman named Yukari Yukino and the duo hit it off immediately.

They begin to share each other’s worries and grow close in this process. But every bond has to pass a certain test and Takao and Yukino have to do the same. Similar to Words Bubble up like soda pop, we find the male and female protagonists harboring strong feelings towards each other.

3. Whisper of the Heart (Mimi wo Sumaseba)

This story is about a 14 year old girl named Shizuku Tsukishima who is a hardcore bookworm. From her library books she finds out about a boy named Seiji Amasawa and decides to find him because of their shared common interest. She comes across him in an antique shop and the duo form a bond quite easily.

Seiji tells Shizuku about his dream that in turn forces her to think about her own life in general. Much like Words Bubble up like soda pop, this anime focuses on a boy and a girl who end up going on an adventure together.

Flavors of youth will take you on a beautiful journey and make you think hard about your life. The plot is set in China where the bustling and hustling life takes a toll on the young minds and leads them to their transformations to responsible adults. The best part of Flavors of Youth is that it is a combination of three separate stories which are going on simultaneously.

They deliver the same message to the audience and show us that the only thing we can carry forward from our past are the memories. Just like Words Bubble up like soda pop, we realize some concrete truths about our life in this anime.

Takaki Toono and Akari Shinohara are lovers who have known each other since their childhood. The problem is that they are currently in a long-distance relationship and it is taking a big toll on their lives. Despite trying to make it work, the passage of time is making them more separated with each passing second.

Not only are they themselves getting hurt, it is having a negative effect on the people surrounding them too. With a keen similarity to Cider no You ni Kotoba ga Wakiagaru, we will get involved in the misadventures of a couple here who will give us a different perspective to life.

More Anime shows and movies to watch if you liked Words Bubble Up Like Soda Pop:

6. Children Who Chase Lost Voices (Hoshi wo Ou Kodomo)
7. A Silent Voice (Koe no Katachi)
8. Horimiya
9. After the Rain(Koi wa Ameagari no You ni)
10. I want to eat your pancreas (Kimi no Suizou wo Tabetai)
11. Weathering With You (Tenki no Ko)
12. Josee, the Tiger and the Fish (Josee to Tora to Sakana-tachi)
13. Your Lie in April (Shigatsu wa Kimi no Uso)