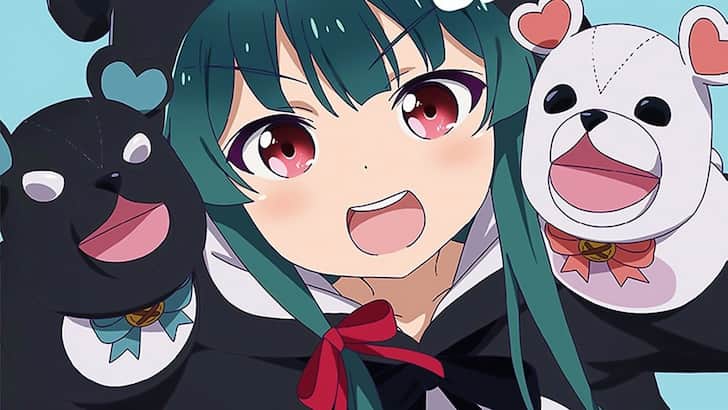 Yuna is a fifteen year old girl who has been playing a VRMMO called World Fantasy Online for a long time. Due to her commitment she receives a bear costume as a present that upgrades her stats by a lot. It also transports her to a new world with no way to log out.

Kuma Kuma Kuma Bear is based on the adventure of a young girl in a virtual world from where she is unable to get back to her own reality. Below you will find some anime which are based on the same premise.

Kaede Honjou is a young girl who is new to the world of VRMMO. After much persuasion from her friend, she finally decides to give it a try and spends most of her time upgrading her defense. It is a very rookie mistake that leaves Kaede at an uncomfortable spot.

But every cloud has a silver lining and Kaede gets some OP defense skills that make her practically invulnerable. She even manages to come third in a competition and people start taking notice of her. Similar to Kuma Kuma Kuma Bear, this anime starts with a young girl deciding to give VRMMO a try.

Also Recommend: 16 Anime Like BOFURI: I Don’t Want to Get Hurt, So I’ll Max Out My Defense

No Game No Life is an absolute treat for every sibling out there who likes to play video games together. Sora and Shiro are two such siblings who get transported to Disboard through a suspicious invitation. This new world is ruled by Tet under whom Humanity is facing a tough challenge to simply exist.

It is up to Sora and Shiro to act as the savior for their race and use their real life skills in exploring this unknown world. It seems they are up to the task as they are already planning to take down Tet by themselves. Just like Kuma Kuma Kuma Bear, the protagonists get stuck in an unknown world with no idea on how to get out.

Also Recommend: 19 Anime Like ‘By the Grace of the Gods’

Elder Tale is a MMORPG that has become quite popular in Japan with thousands of gamers logging in on a daily basis. But everything changes one day when they get taken into the world of Elder Tale with no means of logging out.

One such player is Shiroe who may lack social skills in real life, but his in-game skills are one to watch. He is joined by the first time player, Naotsugu and a fearsome assassin whose sole mission is to protect Shiroe. Log Horizon takes you on an epic ride inside a gaming world which is very similar to Kuma Kuma Kuma Bear.

Sword Art Online is the OG series when it comes to virtual reality games. The main character here is Kirigaya Kazuto (Kirito) who is very excited for the official release of Sword Art Online. But a dark force has some other plans in mind and it traps Kirito along with all the other players in that virtual place.

Moreover, if they die in the game they will pass away in their real life too because of a connection to the nerve gear. The beta players like Kirito will have a slight upper hand in exploring the terrain and quickly clearing all the floors in order to go back to their home. Both these anime involve the main character getting trapped in an unknown world.

Momonga is a passionate player of a VR game known as Yggdrasil. He has done well as a wizard to build his own dark guild. This is why when Yggdrasil is about to be shut down he decides not to log off for the final few minutes. His decision pays off in a way and he gets trapped in his favorite game.

Momonga becomes very surprised at this new development and decides to find out its cause. After all he is not going to have much problem in the world of Yggdrasil as he is already very familiar with it. Just like Kuma Kuma Kuma Bear, we follow the adventures of an overpowered character in a VR world.

6. By the Grace of the Gods
7. The Saint’s Magic Power is Omnipotent
8. I’ve Been Killing Slimes for 300 Years and Maxed Out My Level
9. Yuri Kuma Arashi
10. Didn’t I Say to Make My Abilities Average in the Next Life?!
11. CHOYOYU!: High School Prodigies Have It Easy Even in Another World!
12. Infinite Dendrogram
13. In the Land of Leadale
14. Ascendance of a Bookworm