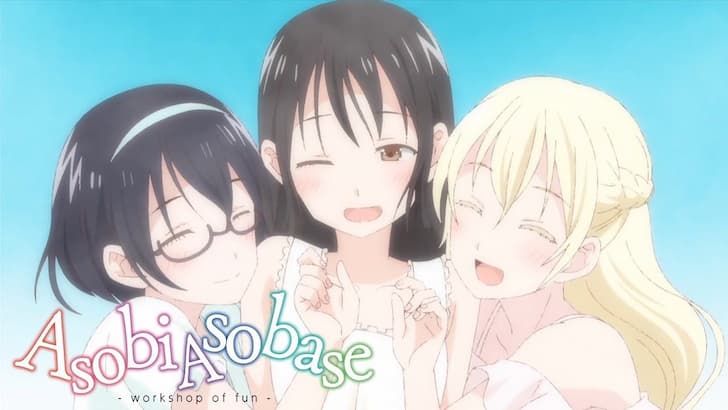 It all starts with the introduction of a transfer student named Olivia. She has no idea about the English language and tries out a new game with her schoolmate, Hanako Honda. Another girl who goes by the name of Kasumi also gets drawn towards them despite being a loner.

Asobi Asobase tells the story of a group of three high school girls who show us that with the right attitude school life can always be fun. Below you will find many anime that upholds the similar theme like Asobi Asobase.

Hidenori, Yoshitake and Tadakuni are a group of three boys who are often seen roaming about the corridors together in Sanada North High School. Their lives are extremely happening, just not in reality.

They debunk the myth that you can’t have fun with your imaginations as they go about every day in their colorful world.

Not a single minute is boring with these guys as they explore a variety of activities ranging from RPGs to romance. Just like Asobi Asobase, this anime depicts the story of a trio of highschool students.

Akane Kikuchi will start her first days of highschool and she is very excited about it. She remembers that she used to dream about becoming a manga artist when she grew up and she may actually try doing something about it. Akane can’t believe her luck when she finds out that her two best friends have also ended up in the same school.

The problem is she wants to have a boyfriend which is obviously impossible in an all-girls’ school. This is why she begins to interact with her classmates with the hope of meeting their guy friends.

Similar to Asobi Asobase, this is a story of highschool girls being involved in some hilarious adventures in their school days.

In this yet another anime like Asobi Asobase we will encounter a group of normal school girls. However, the catch is that their life may seem normal on the outside but in reality it is plagued by one bizarre incident after the other.

And it can be anything from a shower of random objects to battles against weiner. In comes another character named Nano who is actually an android. She wishes for a simple life that can be provided by these quirky girls.

Also Recommend: 50 Most Calm and Relaxing Anime Ever – Ranked

Japan has seen a huge number of changes which means no school girl will find their life to be boring. Following thay notion, we meet a group of peculiar girls who are nothing like each other. They are – Konata, Kagami, Tsukasa and Miyuki.

Their habits contradict each other which is why they even find themselves annoying sometimes. Still, they will manage to do a whole bunch of activities that are really simple but will help them to create a strong bond between themselves. Both these have a group of high school girls who spend their days as normally as possible.

Itoshiki Nozomu is a school teacher who is fed up with his life. Nothing seems to go right for him and even the translation of his name is a pessimistic one. When he finally decides to end everything, his plan is foiled by a bright new student who sees the good in everything.

Her overly optimistic attitude may be just what Itoshiki needs to finally find the meaning of life he is looking for. Like Asobi Asobase, this anime is based on a school setting with a cheerful girl in the center of it.

More Anime shows to watch if you liked Asobi Asobase: Workshop of Fun: