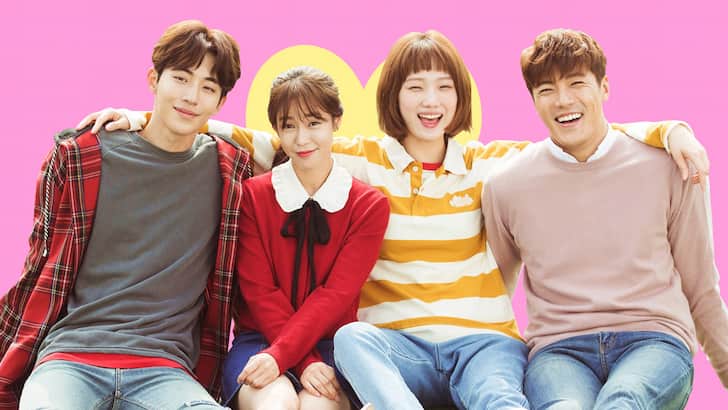 Weightlifting Fairy Kim Bok Joo is a Korean drama based on the concept of “coming of age” of young, hard-working athletes. It has been adopted from the life story of an Olympic gold medalist. This Korean drama was released in 2016, with 16 episodes in total.

The K-drama revolves around Kim Bok Joo (Lee Sung-Kyung), an aspiring weight lifter and daughter of a former weight lifter. She is hard working and has always been dedicated to her goal of winning gold in weightlifting. Once, when she was walking with her friend in her academy, she met Joon-Hyung (Nam Joo-Hyuk), a swimming champion. They were friends in elementary school, and they started meeting often when Joon-Hyung discovered that Kim Bok-Joo had a crush on his brother.

Things turn messy for Kim Bok Joo when she starts struggling with her new training routine while she is trying to impress Joon-Hyung. Joon-Hyung starts to be concerned about her and helps her in many ways, eventually falling for her. Bok Joo also stood with him, helping him to recover from his childhood trauma. This drama also has many hilarious and iconic moments of friendship and romance.

Check out our list of other K-dramas similar to Weightlifting Fairy Kim Bok-Joo, that depicts the life and struggle of young adults.

Kim Dali (Park Gyu-young)is the heir of a prestigious family. She is smart and capable. After the death of her father, she takes over the Cheong-song Art Museum, owned by her family.

She meets Jin Moo-Hak (Kim Min-Jae) at the museum when the museum is in bad financial condition. He is the owner of a food chain business and a major creditor of the Cheong-song Art Museum. He is a whiz in business and has a good mouth.

The following story is about how Moo-hak helps Dali with the museum. Dali and the Cocky Prince is a Korean drama like Weightlifting Fairy as it portrays the lives of young, hard-working leads with romantic comedy.

Yoon Hye-jin (Shin Min-a) is a dentist who moved from a big city clinic to a small village after being duped by the head doctor. She was an idealistic woman who adhered to certain moral principles.

She confronts Hong Du-Sik (Kim Sun-Ho) after relocating to the beach village of Gongjin. Du-Sik is a charming and helpful guy. After several encounters and quarrels, Du Sik and Hye Jin began to grow closer as Du Sik assisted Hye Jin in settling into the town.

This is a Korean drama like Weightlifting Fairy Kim Bok Joo as the love story leads is quite similar where both don’t like each other at first, then become friends and lovers. Both the dramas give a soothing vibe.

Kang Chul (Lee Jong-suk) is the CEO, millionaire and owner of JN Global, with several businesses including e-commerce and television media. He is a former shooting champion but left everything after a tragic incident with his family.

At present, he has started a project called “W” based on Webtoon. The fictional story turns into an alternative world parallel to the real world. Oh Yeon-Joo (Han Hyo-joo), daughter of Oh Seong-moo, who is the writer of “W”, starts to investigate after her father went missing when she meets Kang Chul in an alternative world.

The drama depicts the story of two worlds clashing with each other, bound by romance, crime, and suspense. “W” Two Words is a Korean drama like Weightlifting Fairy Kim Bok Joo as the characterization of both the dramas are quite similar, presenting a sporty background and father-daughter relationship and romance.

Hello, My Twenties revolves around the young lives of five girls leaving together. Yoon Jin-Myung, Jung Ye-Eun, Song Ji-Won, Kang Yi-Na, and Yoo Eun-Jae. The drama is about good and bad times, with laughter and tears.

It also represents the struggles of typical young girls in their 20s, like struggling with on-and-off relationships, life goals and finances. The following story showcases how the lives of these girls take on real-life problems and how they help and support each other during hard times.

This is a Korean drama like Weightlifting Fairy Kim Bok Joo. As they both highly resemble each other with the concept of real-life problems and struggles of people in their 20s, where girls and boys are trying hard to cope with their careers, moods, and life-changing moments. Also, girl gangs are common in both dramas.

Jang Jae-yeol (Jo In-sung) had a dark past due to his mental disorder and compulsive behavior. At present, he is the author of a best-selling suspense novel and a famous DJ host. He still has the habit of sleeping in the bathtub. He starts visiting psychiatrist Ji Hae-soo after meeting her at a broadcast.

He started to be concerned about her as she gave him a sense of ease and he started to like her. But things get a bit messy when they confront their mental issues, fear, and insecurity due to past family events.

It is okay that love is a K-drama like Weightlifting Fairy Kim Bok Joo, with a similar plot and character development throughout the drama. In addition, both dramas highlight mental health issues and how the lead couple helps each other cope with their personal struggles.