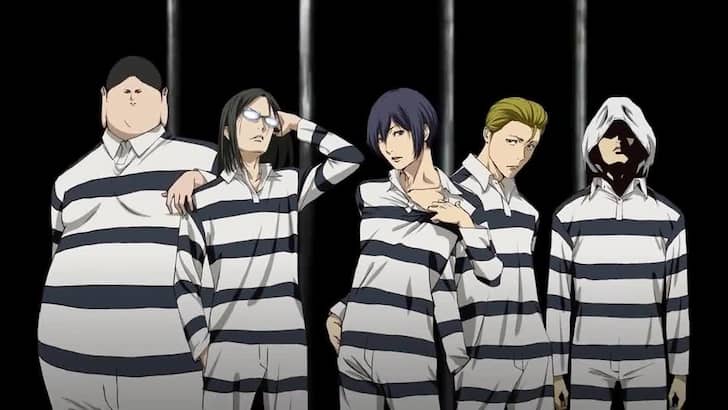 Hachimitsu Private Academy is famous for being a boarding school for girls. The twist arrives when five boys are also allowed to enter the school for the first time. Only one of them is granted a place in the Student’s Council with the rest of them cast aside.

The other students decide to take a peek into the girl’s bathroom that starts a hilarious chain of events. Prison School is an ecchi anime with lots of funny moments and you can find recommendations similar to it below.

1. Highschool of the Dead

Highschool of the Dead is a story about Zombie monsters that begin terrorizing Japan. Takashi Kimuro is a high school student who is forced to kill his best friend with his own hands after he turns into a zombie.

Takashi groups together with the other students as they try to reach out to their families and find the cause of this apocalypse. Similar to Prison School, this anime has lots of ecchi scenes for you to enjoy.

Iori Kitahara has just taken admission in a new university which sees him moving to the coastal area of Izu. He takes residence above the scuba diving shop of his uncle, where many members of the Diving Club often come to visit.

Iori’s idea of a serious first year in college is soon cut short by the eccentric activities of his upperclassmen. As he joins a party thrown by the Diving Club members, he is caught in that act by his cousin and earns him her wrath.

3. SHIMONETA: A Boring World Where the Concept of Dirty Jokes Doesn’t Exist

Japan has imposed a set of new morality laws where any obscene and sexual stuff is banned. In comes Tanukichi Okuma, the son of a terrorist who takes admission in a new school. He wants to get closer to his childhood crush who also happens to be the Student Council President.

The problem is that the Vice President is on a secret mission to spread lewd things in school as a protest against the government. Their first target is the Council President, which puts Tanukichi in a huge dilemma. Both these anime follow a main character who gets himself involved in a lot of lewd stuff.

Kintarou Ooe is living the dream life of many guys out there. Due to his part time work, he gets to drive the highway with his Mikazuki 5. Not only does he learn a lot from his adventures, but he also meets many exotic women in the course of his journey.

This doesn’t mean he is carefree with his ways. He takes every job very seriously and hopes to learn a lot. Just like Prison School, we see the main character engaging in a lot of sensual activities.

Keijo is the name of the latest trending competition in Japan. It involves a lot of girls in a swimming pool who try to knock each other out into the water. It is also only restricted to girls which attracts a lot of viewers.

Nozomi is the latest entrant to this competition and she immediately shocks everyone with her brilliant performance. This may just be the thing she needs in order to bring good fortune to her family. Similar to Prison School, this anime has got loads of cute girls who are the main attraction of the story.

More Anime shows to watch if you liked Prison School: