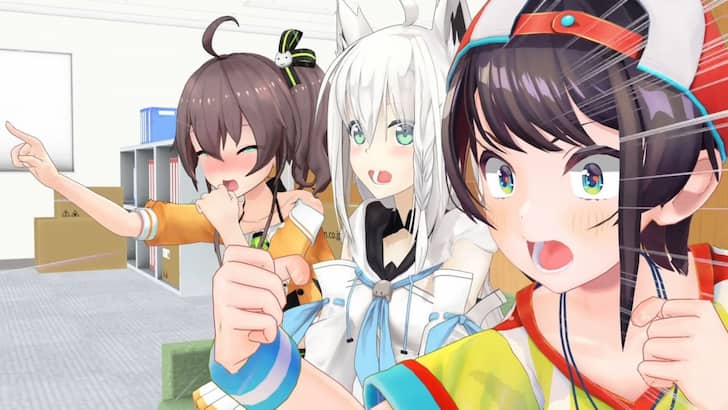 This anime takes place at the Hololive Production office where every day is filled with fun and surprises. The viewers will be following a group of VTubers who engage in hilarious activities and keep the audience entertained.

Holo no Graffiti follows a unique plot involving VTubers and if you are in love with this show then find some of the similar recommendations down below.

Virtual-san Looking is an anime similar to Holo Graffiti that brings together a bunch of VTubers. Every episode involves them doing some quirky stuff as they break the fourth wall numerous times. They will have a defined skit to perform in each episode that is filled with a bunch of activities.

The VTubers are also different from each other and bring a lot of diversity to the cast. Each of them has their own unique personality to add more spice to the show.

Just like Holo Graffiti, Snack Time is based on the similar concept of VTubers. It is based on CG animation created only for fans who love to watch NIJISANJI VTubers.

This way they can watch small moments from the daily lives of these NIJISANJI VTubers where they are involved in various activities in their daily lives.

It will be filtered out to bring the best moments of the VTubers and present them directly to the fans.

This anime involves a gravure idol by the name of Asada Misako who is at the centre of the story. There are other supporting characters too from the Kyoto University of Art. It is mainly a comedy centric anime where Charady tells a lot of jokes from various parts of the word.

Her rabbit and pig friends usually accompany her in this venture. This joke can range from the troubles of a girl to a tribal boy’s challenges that are all etched in her book. Both of these anime involve a wholesome plot where the main characters talk to the audience.

The story of this particular anime is about the three Watanuki sisters. They will be portrayed by 3 VTubers who stay together in the same house. The aim of this anime is mainly to show how they are coping with the loss of losing their parents and supporting one another as they pass their everyday lives.

It is a very heartwarming show as we will see the three sisters busy in their daily activities. If you love Holo Graffiti, then you will also like this anime as it involves an engaging story about VTubers.

The core of this story is based on certain teams called Patraisers which consists of two different types of people. One is called the Sugars while the other is called the Patrons. The task assigned to these teams is to reinvigorate the frozen hearts of the affected people.

We will follow the journey of one such Patraiser which includes Asahi Yuga and Ryouya. They are both the Sugar and Patron respectively as the focus will shift on their everyday lives. Similar to Holo Graffiti, this anime is based on the daily shenanigans of the main characters.

More Anime shows to watch if you liked Holo no Graffiti: