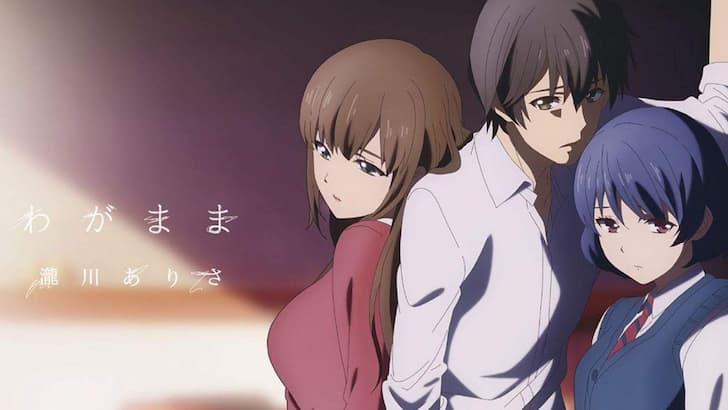 Natsui has fallen deeply in love with a teacher in his school who goes by the name of Hina. Since Hina doesn’t share those same feelings, Natsuo decides to go to a mixer and meet some girls. There he meets Rui who is also unsocial like her.

After some awkward interactions with her, Natsuo comes home to find out that his father is getting married again and his new step-siblings are going to be Hina and Rui.

Domestic girlfriend is a story about a boy coming to terms with his own feelings and if you are looking for something similar to it, you have come to the right place.

Raku Ichijou studies in Bonyari High School and belongs to a dangerous yakuza family. When he slowly grows into a teenager, he decides not to get involved with his family. But he has to maintain a romantic relationship with a gang leader’s daughter against his will.

The situation is even made worse by the fact that Raku has a crush at his school named Kosaki Onodera. Similar to Domestic Girlfriend, this anime has a main character that gets caught up between two girls.

It has been a dream comes true for Shinichirou Nakagami when he starts living with the brilliant Hiromi Yuasa. The only problem is that Hiromi has been unable to get over the death of her mother and always remains sad.

This changes when he meets a girl named Noe. Noe’s tears were stolen and she needs someone else’s tears in order to start crying again.

Just like Domestic Girlfriend, we will see the protagonist struggling with his emotions in the story as he tries to navigate between two girls.

Miki Koishikawa studies in high school and prefers a very quiet life. But this gets derailed once her parents decide to get divorced. They are changing partners with another couple and they take Miki to meet them. Miki instantly falls in love with their son who also reciprocates her feelings.

They also have suitors of their own on top of that who desperately want to keep them separated from each other. Both these anime involve the main character having feelings for someone who turns into their step-sibling.

Keita Suminoe gets two new sisters in his life when his father decides to get married again. This situation takes a wild turn when his new sisters develop strong feelings for him. Keita decides to drown himself in studies but he is also facing an inner battle of his feelings towards his sister.

There are also other people who have taken a liking to him and it always resides on Keita’s will of not giving in to his sisters’ advances.

If you liked Domestic Girlfriend, then you will also love this anime as it is set up on the same premise of romantic feelings between step-siblings.

This story is set in the future where Japan has introduced a new law in order to increase the reproductive count. People are assigned a marriage partner at a very young age and they can’t say no to it.

The protagonist of this anime Yukari Nejima decides to go against this law and confesses his feelings to Misaki Takasaki. But he soon gets his marriage notice with another girl who seems overly enthusiastic about his relationship with his crush. Just like Domestic na Kanojo, the core of this plot is based on a love triangle.