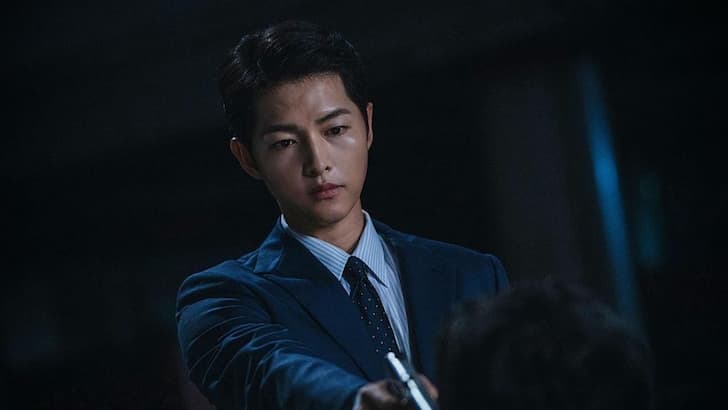 Vincenzo is one of the most trending K-dramas of 2021 on Netflix, along with other K-dramas. Starting with Park Joo-Hyung (Song Joong-ki), aka Vincenzo, the henchman lawyer and adopted son of the Italian Mafia Don Fabio, After the death of Don, Fabio Vincenzo flew back to Korea in order to retrieve the gold he had buried for a late Chinese client.

The center of this K-drama is undoubtedly the portrayal of a strong, charming character, featuring Song Joong-ki’s performance as an actor. Despite this, the other characters in Vincenzo’s life have caught the attention of the audience all over.

Hong Cha-young (Jeon Yeo-been), the female lead, can be considered as one of the quick-witted and hilarious drama queens of K-dramas. She is the daughter of Hong Yoo-chan. She is also the lawyer of the rival firm of her father, but later takes over Jipuragi Law Firm after her father’s accident and fights along with Vincenzo to provide justice to the people abused by using power and money for their gains.

The bad guy in the drama, played by Ok Taecyeon as Jang Jun-woo, had two identities in the drama, giving two completely different vibes, surely attracting attention with his charming yet cunning character.

Another side character like Jang Han-SEO, half-brother of Jang Jun-woo, who seems to be rude and self-proclaimed but is actually a sweetheart, wins all hearts as we progress with the drama. This drama is the perfect balance of legal and action concept.

If you are a fan of Korean Dramas like Vincenzo (Binsenjo), that provides many iconic moments blending legal, thriller and action plots then check out the below recommendations.

Bong Sang Pil (Lee Joon Gi) is a notorious boy who was raised in an atmosphere of thugs and goons. After being a capable adult, he returns to his hometown to clean up the mess created by the higher official who wields power and money.

His mother was killed, and this case involves the judge, Moon-sook, and Oh-joo, a rich businessman, for which he is seeking revenge. He starts his law firm with Ha Jae-yi (Seo Yea-ji). She is a fierce attorney who is not afraid to smack a judge after he gives a wrong verdict. To seek justice, he uses his cunning tactics to deal with people who are often lawless.

This K-drama is further filled with twists and turns, revealing the dark sides of high-profile faces. This drama features side-comical plots and chemistry between the lead couple, which makes it more watchable like Vincenzo.

The plots of Vincenzo and Lawless Lawyer are very similar in which the main character is not afraid to take the law into his own hands. Also, the female leads and other characters are associated with law firms. Lawless Lawyer is most suited to the list of K-drama Similar to Vincenzo, although Lawless Lawyer is more action-oriented with well-crafted fight scenes.

Starting with Eun Bong-hee (Nam Ji-Hyun), a rookie prosecutor, a sharp-tongued girl who manages always to get herself into awkward situations. She always goes around throwing temper tantrums at her ex-boyfriend, whom she claims dumbed-cheated her. She starts working under a prosecutor in the Sunho District Prosecutors’ Office named Noh Ji-Wook (Ji Chang-Wook).

He is a smart-ass prosecutor who had a tough past and has also been cheated by his girlfriend with her best friend. Later, Bong Hee is suspected of killing her ex-boyfriend, who was found dead in her apartment. Ji-Wook changed his profession in order to defend Bong Hee. The later storyline is followed by a revealing intertwist of their past.

Just like Vincenzo, this show too shares the concept of a legal and dark comedy storyline featuring charming male leads and straightforward female leads who stand for themselves. This K-drama is different from other rom-com because it portrays a serious plot with well-balanced screen time and dark comedy all along. Also, the Suspicious Partner also has a psychopath antagonist like Vincenzo.

If you are a thriller addict, then this K-drama is a treasure for you. The story begins with Baek Hee-sung, the ideal husband of Cha Ji-won (Moon Chae-won) and the endearing father of Cha Ji-won’s daughter Baek Eun na. Even after years of marriage, Hee-sung and Ji-won have not let their love fade away.

Hee-sun runs a metal art shop, whereas Ji-won is a keen detective who lives for her work, not sparing any criminal act. Ji Won and her team start investigating a murder case, which gives them, lead to the husband of the last victim of a serial murder case closed 15 years ago. The case is reopened after a theory article about a serial killer who killed seven people is published.

The following story reveals the entangled, dark past of Baek Hee Sung, and their marriage tends to fall apart as Ji-Won confronts her husband’s true identity. Despite their internal conflict, they fight for the relationship. Each episode of K-drama makes the audience indulge in the suspense storyline.

This k-drama resembles Vincenzo since both of the K-dramas have psychopath antagonists and the storylines of both maintain their pace by focusing on the main cast rather than sharing screen time with a collateral side story. Also, Vincenzo and Flower of Evil make the audience thrive with suspense, thrillers, and action.

Both the dramas have put forward the potential of actors in the best way possible. It gives a different vibe than other predictable and sweet K-dramas. Also, the main leads have given a commendable performance in these K-dramas, adding a wide spectrum of performance playing two iconic characters in the world of K-dramas.

Taxi Driver is the ideal K-drama to wash away the additional cheesy-ness of romantic comedy K-shows. The focal point of the K-show is the Rainbow Taxi Company, an organization with a perfect outside picture. In any case, a gleaming outside may have a dim inside. This organization works to help victims who have not gotten equity (Justice) from the law.

This organization delivers retribution to such victims by punishing the real culprits all alone rather than depending on the law and judicial framework. The organization comprises Jang Sung-Chul as the CEO, Pyo Ye-jin as the digital master, and Kim Do-gi (Lee Je-hoon) as the driver, executing every one of the causes they address.

This story depends on genuine social issues in Korea, for example, bullying, gambling by which innocent citizens are abuse by using influence and cash, prejudice, and so on. Each episode thinks of new parts of the story to be introduced, causing the watcher to sit on the edge.

This K-show is in the rundown of Korean dramas like Vincenzo since these two K-dramas narrate dark activity and action in society through its plots. The cast of both the k-drama and the movie have utilized the entire entertainer’s maximum capacity to depict their characters separately.

Additionally, there are many exciting action scenes that make you flourish, and this emphasis favors the focal point of the show rather than a large number of exciting bends in the road. I can’t fail to remember the solid female leads of Vincenzo and Taxi Driver, who have eccentric chemistry with the male lead without many sentimental emotions but portray a matured and sophisticated relationship.

Lee Ahn (Jinyoung), a young boy who lost his parents after a tragic fire incident in their apartment, has developed a special power of reading the past of things and humans just by touching them. He is a fun loving character, always putting a smile on his face and accepting the facts, but deep down he still misses his parents.

He lives with Sung-mo (Kim Kwon) aka Hyung (elder brother like), who saved him during the fire incident. He is a prosecutor and one of the few people on whom Lee Ahn’s power has no effect, i.e., he can’t read their past by touching them. Shin Ye-Eun), a transfer student at Lee Ahn School, discovers his power and requests that he assist her and her father.

Unknown to the truth of her past, Ahn starts to have feeling for her. While all this was happening, Sung-mo and his fellow Eun Ji-soo (Kim Da-som) officer teamed up to solve the deceptive same fire incident that meddled in the calm lives of Lee Ahn, Jae-in Sung-mo, and Eun Ji-soo. As K-dramas go on, the truth of the past haunts their present, but they held strong to heal each other.

“He is Psychometric” is a Korean drama like Vincenzo as it narrates an engrossing legal drama storyline about fighting to catch the real culprit. These dramas have been seeking peeks into the minds of psychopaths, which makes them thrive with thrillers. This K-drama in particular shows a heart-warming bromance, giving them a separate fan base. Throughout the K-drama series, these dramas keep the viewer engaged.

More K-dramas and series to watch if you liked Vincenzo: