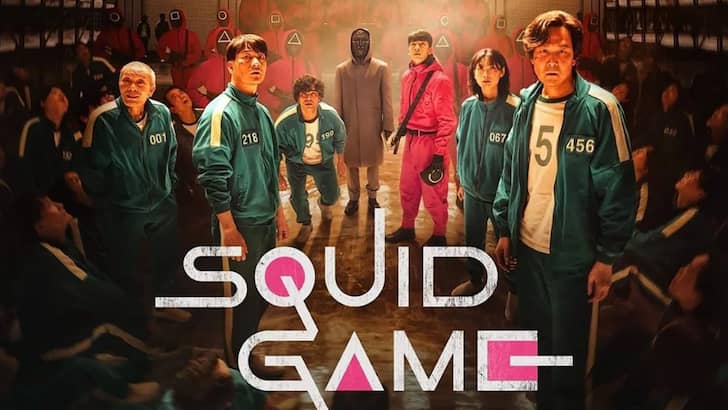 “Squid Game,” the biggest hit series from Netflix, is also one of the most trending topics and searched on the internet. This K-Drama has set milestones throughout the world.

A highly confident international group of wealthy people create a game of various levels featuring old local kids’ games played in Korean. Hold on a second. The players are chosen by the hosts of the games in a very mysterious and cunning way, offering the big prize money of 40 million dollars.

All the players who got the invitation card for the game are ordinary people at different stages of life. You see young girls at their teen age and old uncles in their 80’s. All these people struggling in their life with financial challenges also have internal fights within them. The twist here is that the player who loses is killed at the same time, making it a thrilling survival game.

Throughout the series, the audience goes through an emotional rollercoaster because no character can be trusted, and on this cliff of life and death, humans can show eccentric sides of emotions. Every character has a different story with real-life struggles, making the viewer high on adrenaline.

Raising social issues with a spectacular plot and amazing acting, this series is sure to be a deserving hit. It features several brutal and bloody peak points. Each character competing with each other makes the audience discover the end of the story, which is again incomplete.

If you are looking for more thriller, action, and suspense Korean dramas like Squid Game, here is a list below.

The tenants of the Green Home are stuck in an apocalypse where they have only two choices: to die as humans or to live as monsters.

It starts when Cha Hyun-soo shifts to the Green Home apartment and loses his family, and when suddenly a monster starts destroying humankind. The entire plot has devolved into a survival game for Cha Hyun-soo, Pyeon Sang-wook (Lee Jin-wook), Lee Eun-hyuk (Lee Do hyun), Seo Yi-kyung (Lee Si-young), and the other Green Home residents.The following plot continues with a bloody shep battle between humans and monsters for the price of living as humans.

Sweet Home is a K-drama like Squid Game since both these dramas have a thrilling visuals and plot for the audience. The audience is immersed in Sweet Home like a Squid Game to watch how each character ends up, with an excellent performance by the cast.

Just like in Squid Game, each character has their own story, which makes the audience hate, love, or sympathize them. The high quality visuals and cinematography can be seen in both the dramas.

Extracurricular depict the peer pressure that the youth of our generation have to bear. The story begins with Oh Ji-soo (Kim Dong-hee), a bright student at his school living far from his family.

Due to the lack of support and guidance from any elders or family members, he is involved in dark world crimes to support his financial needs. Bae Gyu-ri (Park Ju-hyun) also joins hands with him. Other students of his school are also involved in illegal businesses, living a dual life. Things went horribly wrong when police got suspicious about these illegal activities in school and started to investigate them.

Extracurricular and Squid Game, with their style thriller plots and live lesson plots, depict how people are unwittingly forced into lethal illegal business games to support their lives, among other things.

In both the K-dramas, people are chasing money for those who desire a good life, want to support their family, want peace of mind, or greed. With a fresh, spicy topic and an engrossing story, these K-dramas have served well. The audience is desperately waiting for the next season because both have incomplete cliff-hanger endings.

The “Uncanny Counter” is a thriller action fiction featuring an unconventional team with paranormal power. Based on the fictional city of Jungjin, the team members are called counters, who search for evil spirits that escape the journey of the afterlife and satisfy their evil thirst by posing as humans.

The actual plot starts when a young disabled boy, So Mun (Jo Byung-gyu), starts working at Eonni’s noodles. Astonished by the fact that all the employees here are counters at night, a thriller starts fighting the demon and why So Mun is chosen as a counter.

Both Uncanny Counter and Squid Game are well-choreographed K-Dramas, making the audience ride an emotional rollercoaster. Also, in the amazing storyline, teamwork and trust are portrayed during hard times. Viewers are eagerly awaiting the sequel to Squid Game and Uncanny Counter.

This is an eccentric K-drama which throws light on the religious cult that targets the emotionally weak and needy for their evil deeds. The Sang family was one of their targets, and they were relocated to the countryside due to the health of their son, Sang-jin.

After his death, his parents are brainwashed by the cult to indulge them in their dark world. The elder daughter of the family was suspicious about the activities of the religious cult but was incapable of speaking up because of the fragile state of her parents.

The scenario turns creepier when Sang-mi vows to expose them along with her classmates and discovers the dark, inhuman intention and torturous murder.

The association of higher, corrupt, wielding power, who use the needy and deprived for their entertainment and evil intentions, which leads to blood games, is common in Save Me and Squid Game. And the victims gear up to fight against this evil group.

Yoo Jin-woo (Hyun Bin), the owner of a digital and gaming investment company, visits the faraway of Granada in Spain. He came to make a deal with Jung Se-joo (Park Chan-yeol), who has created an appealing AR game reciting the medieval tails of Alhambra.

Se-joo mysteriously goes missing and Jin-woo crosses paths with Jung Hee-joo (Park Shin-hye), sister of Se-joo, who is the host player of the AR game. The following is an adventure story about unraveling the mystery of Alhambra. Hee-Joo and Jin-woo are propelled forward by a race between the virtual and real worlds.

Squid Game and Memories of Alhambra are both centered around a game which is out of reach for most of the world. Memories of Alhambra is a K-drama featuring suspense and action that carries the audience till the end of the series. Each episode is fitted with well-paced direction.

More Korean dramas to watch if you enjoyed Squid Game: