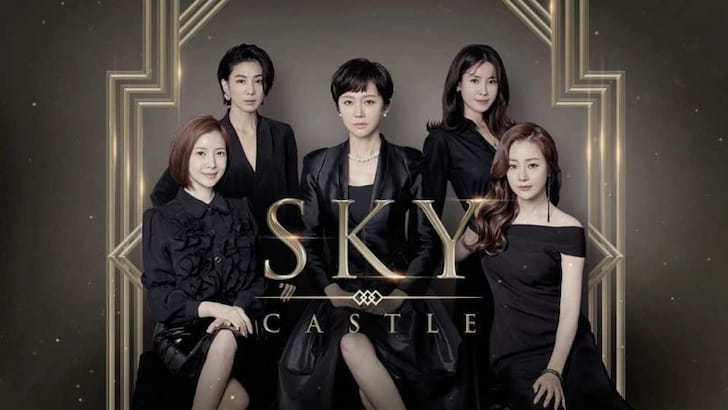 Sky Castle is the second highest rated drama in Korean television history and has 20 episodes. Sky Castle mainly focuses on education, real estate, power, and being at the top. It depicts the hard work the kids need to do and must do, as there’s no other choice given to them by their parents. Everyone wishes to be on top, no matter the cost. Lives are taken on the way to becoming a doctor, then saved.

The k-drama has one of the largest casts ever, starting with Han Seo-Jin (Yum Jung-Ah) married to Kang Joon-Sang (Jung Joon-Ho). They have two daughters, and they both have secrets feeding on them. Lee Soo-Im (Lee Tae-Ran) is married to neurosurgeon Hwang Chi-Young (Choi Won-Young) and they are the new residents of Sky Castle as they move in with their son.

Lee Soo Im has a lot of affection towards kids and starts noticing the wild among the families of Sky Castle and can’t stop herself from fighting and trying to help. But things slowly start worsening as a few more lives are lost. Sky Castle is not only a mystery and a thriller, but it is also a comedy due to all of the families involved.

With stunning production, right-on-point acting skills of the cast and a rollercoaster ride like storyboard, Sky Castle won’t be forgotten for a long time to come. It portrays strong social issues in the society of youth and families where kids have to face tremendous pressure and stress for education and high-class families have competition between them. Thrillers and suspense plots make Sky Castle a highly rated K-drama. Check the following list for more Korean dramas like Sky Castle:

This drama has romance, melodrama, and youth with an interesting cast: Woo Doo-hwan as Kwon Shi-Hyun, Joy as Eun Tae-hee, Mun Ka-Young as Choi Soo-ji, and Kim Min-Jae as Lee Sejoo as the main leads. It is directed by Kang In. It was released in March 2018 with 32 episodes. Kwon Shi-Hyun, Choi Soo-ji, and Lee Se-Joo were childhood friends as their families were the richest and they worked in the same industry.

Shi-Hyun and Soo-ji had a great spark between them from the very beginning, but they couldn’t date because they thought it would ruin their friendship. Soo-ji was recently ditched by her boyfriend, and she wants to seek revenge. Soo-ji is a brilliant student and gets her scholarship at the same college as Tae-hee, whom she comes to know as a good friend of her ex. She asks Shi-Hyun to pretend that he is crazy about her.

The story takes a turn as the main character unknowingly falls in love with Eun-hee and starts dating her behind his best friend’s back. Shi-Hyun and Eun-hee’s story don’t just end here, as their families are involved with each other. This drama gets interesting as it has twists between family, friendship, and love, like Sky Castle.

The young characters in Tempted, like those in Sky Castle, are dealing with issues in their personal lives and relationships. The complicated relationship with parents and the love life plotline are similar in both the K-dramas. The audience is excited to watch how each character ends up in the story, with an unpredictable storyline. With classic visuals and a big star cast, this is a Korean drama like Sky Castle.

This K-drama is adapted from a webtoon of the same name on Naver, starring Park Hae-jin as Yoo Jung, Kim Go-Eun as Hong Seol, Seo Kang-Joon as Baek In Ho, and Lee Sung Kyung as Baek In Ha as the main cast. Yoo-Jung was a very famous boy in college. Not only because of his good looks but also because of how he treats people and his rich family, whereas Hong Seol returns to college after a one-year break.

Due to her poor background issues, as soon as she enters college, her life couldn’t get any worse, as she is the only person who gets to see the very dark side of her senior, i.e., Yoo-Jung. As she gets to know him, she is unaware of the fact that Yoo-Jung is already falling in love with her. Unknowingly, Baek In Ho shifts near Hong Seol’s neighborhood, and they cross paths every day and become good friends. As Hong Seol starts dating her senior, she is starting to get to know her boyfriend’s past through Baek In Ho.

Cheese in the trap is all about youth romance, college life, and thriller/psycho concepts; how Hong Seol changed and accepted Yoo Jung as he is, but how his presence brings several unpredictable situations. This is why it is a Korean drama like Sky Castle, portraying teen struggles with families and studies.

Law School, a youth Korean drama with a murder mystery, stars Kim Myung-min, Kim Bum, Ryu Hye-young, and Lee Jung-eun. It is directed by Kim Seok-yoon and has 16 episodes. The K-drama mainly revolves around Hankuk University Law School. Han Joon-hwi, a first-year student, is a scholar boy with wits who is not afraid to speak his mind.

Kang Sol A, a first-year student who entered law school through special admission, She is a hard-working average student with a jolly personality and is clumsy most of the time. The main plot starts when a lawyer and professor, Professor Seo, is found dead in his office. The case is brought to court and Professor Yang is proven guilty but not satisfied with the verdict. Kang Sol, Han Joon-Hwi, and other students at Hankuk start searching for the real culprit.

This K-drama with suspense, law, and youth concepts makes it a Korean drama like Sky Castle. It makes the audience assume the plot and then come up with a thriller twist. Well-calculated performance and youth life are centered on studies and competition, as depicted in both the K-drama and in real life. Also, family struggles with kids’ education and teen romance are portrayed through its plot.

At a very young age, Jung Da-jung (Kim Ha-neul) and Hong Dae-young (Yoon Sang-Hyun) in high school fall for each other. Da-Young was a basketball player, while Da-Jung was an aspiring anchor. But teen love can’t be stopped by anyone.

At a young age, they both get ahead in a relationship and become young parents of twins, Hong Shi-ah (Roh Jeong-eui) and Hong Shi-woo (Ryeoun). Despite having no financial support, they started a family with children. They gave up on their dreams to support their family and take care of their children, and they were not able to focus on their careers.

After 18 years of marriage, they decided to get a divorce. On the day of the divorce, Dae Young decided to visit the basketball court where he left for Da Jung, wishing that he could change that moment 18 years ago. And wishfully, he regains his body from his 18th year with his present mind as a 37-year-old father of twins (Lee Do-Hyun). He started attending the same school where his children studied. He gets to know the struggles of his Sia and Si-woo at school and tries to be their friend and get close to them.

18 again is added to the list of Korean dramas like Sky Castle as its plotline showcases how young and teen students have to face their own struggles such as bullying, financial problems, and stress. Still, they keep these issues to themselves, hiding them from their family as they understand the problems of their parents and family conditions, which often have an impact on them in various ways.

Hee Tae becomes Gwangju’s pride when he enters the Seoul National University College of Medicine with high marks. His best friend, Kyung Soo, a pro-democracy activist, insists they have opened an illegal clinic for students fleeing the government.

One day, a factory worker was injured during a protest. To cover the expense of transporting her and a factory worker to her hometown, Hee Tae should attend a meeting with a potential marriage partner. At the meeting, Hee Tae meets Myung Hee, a nurse who insists on a difficult life.

He only agrees to go to the meeting instead of his friend, Soo Ryeon, because he needs to get the airfare to study in Germany. However, Myung Hee and Hee Tae eventually fell in love.

In May 1980, amid the sheer zeal and cries of democracy that returned to Gwangju, Hee Tae and Myung Hee found themselves on the brink of extinction. With a youth and romance concept, this is a Korean drama like Sky Castle.

More K-dramas to watch if you loved SKY Castle: