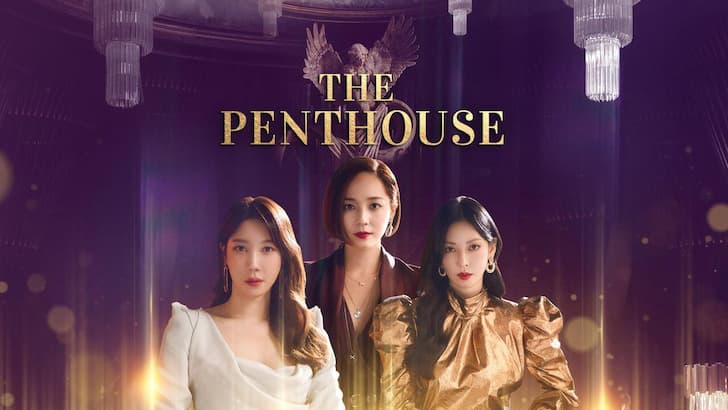 The Penthouse (Penteuhauseu) is a K-drama that revolves around wealth, fame, family, and, of course, lots of “drama”. The story is about Shim Su-Ryeon (Lee Ji-Ah), whose second husband is Joo Dan-Tae (Uhm KiJoon). He is very successful in his business and real estate, and he is the owner of the 100-floor Penthouse Hera Palace, where they live with their twins, Joo Seok Hoon (Kim Young Dae) and Joo Seok Kyung (Han Ji Hyun).

Shim Su Ryeon has always lived an elegant, wealthy, and peaceful life until she finds out that her daughter from her first husband is still alive, Min Seol A (Jo Soo Min). She makes her identity and somehow manages to enter the Hera Palace as a tutor for the Hera Palace kids.

Everything starts to turn head over heels when the death of a young woman, Min Seol-ah, is announced. She awfully dies at a party at Hera’s palace. People in Hera Palace try to cover up the death, but they can’t help but have doubts about one another. Here comes the first suspect in her death, Oh Yoon-hee (Eugene).

She has a daughter, Bae Ro Na (Kim Hyun Soo), who desires wealth and everything the Hera Palace kids have and she doesn’t. Oh, Yoon Hee, who was famous for her singing skills back in school, lost her place in the classical music industry due to Cheon Seo-Jin (Kim So-Yeon), who was born into a wealthy family and is one of the residents of the Hera Palace. So Oh Yoon Hee and Cheon Seo Jin can definitely kill to win over each other and so do their daughters. Check the following list for more Korean Dramas like Penthouse.

Best Korean Dramas Similar to The Penthouse: War in Life:

Graceful Family is about another wealthy family, and the problems they face are proportional to their wealth. It’s all about family, thrillers, and how a family can kill for them and others. Graceful Family is called TOP, which handles company and family issues that would reflect badly on MC Group.

Heo Yoon-Do (Lee Jang Woo) is brought on to the team and gets involved with the MC Group’s daughter, who is searching for the person who murdered her mother. Mo Seok-Hee is very kind but acts arrogantly to keep up with her so-called family.

They work together to solve the murder, stop Seok Hee’s greedy family, and restrain the TOP group. These two keep busy! Also, a heads-up on the romance front: Seok Hee and Yoon Do do slowly build a low-key relationship, and we do finally get a dash of romance late in the drama.

Graceful Family, with similar cinematography and a visually appealing screen, is a Korean drama like Penthouse. Murder mystery and suspense plots keep the audience engaged till the very end. Strong and classic characters make these dramas more binge-watchable. Each actor had an impact on the audience with their great performances.

Penthouse 2 focuses on the mysteries of Shim Su-ryeon and the outcome of his death. The revenge of Oh Yoon-hee, the fall of Cheon Seo-jin, and the children of Hera Palace who want to be ahead and win the grand prize in Cheong-ah Arts. The ceremony.

After successfully naming Oh Yoon-hee on a murder charge, Cheon Seo-jin and Joo Dan-tae decided to get married. Their wedding was interrupted by Oh Yoon-hee and Ha Yoon-cheol, who had recently returned from the United States.

As the secrets are revealed, the relationship between the people of Hera Palace is strained, yet another mysterious person appears and confronts them.

This K-drama focuses on the lives of the top 1% of high-profile women. A sceptic’s drama about dangerous lies and hypocrisy hidden in the good lives of women in the top 0.1 percent of society. Song Yeo Wool, who lost everything when she was planning the murder of her husband, Nam Ji Sun, “queen bee” among mothers at an international school where Song Yeo Wool’s son attends, Danny Oh, a school teacher and former ice hockey player. Danny Oh is a man with sharp figures and a charismatic personality.

All the women around him have a secret crush on him, but he hides some suspicious traits and past behind this handsome face. Hwang Na Yoon, a single mother who is the only friend of Song Yeo Wool, Nam Ji Sun is a former actor who follows Cha Do Young around because he wants to be seen again.

High Class portrays the lives of these high-class women where each one of them has their own unique struggles and are fighting internal battles among themselves. Every character is eccentric with two faces, and each of them desires fame, money, power, and love, for which they can go to any extent. With similar characterization, High Class is a Korean drama like Penthouse.

This K-drama revolves around the Hyowon Group, a wealthy family group. The family group consists of two sons, Han Jin-ho and Han Jin-Yong, and their mother, Jung Seo-hyun and Seo Hi-soo. Han Jin-Yong has a son from his ex-wife named Han Ha-Joon, even though he is a stepson. Hi-Soo loved her dearly like any other mother and couldn’t bear any separation from him.

As is the protocol of high-class families, Hi-soo appoints a personal tutor for Ha-Joon. Things get suspicious when the tutor and her husband seem to be close. When she confronts Jin-Yong and the tutor about their relationship, she breaks into a piece when she gets to know the true identity of the tutor. The following drama turns gratifying as it reveals the dark sides of these high-class families.

This is a Korean drama like Penthouse in terms of portraying strong female characters and the family life of the upper class. Also, both these dramas are visually appealing with classic and authentic backgrounds and styling. Still, mine gives the audience an experience of ease as the characters develop, showing caring sides of character as compared to Penthhouse.

“Royal The Hills” is a sophisticated high-class residence where most of the rich and influential personalities of South Korea have their houses. Baek Soo-Hyeon (Ji Jin-hee) is the main lead of this K-drama. He is a top-notch anchor with a strong outlook, and his words hold supremacy that has a great impact on people.

He is married to Seo Eun-soo (Yoon Se-ah), who is the daughter of a VIP and chairman of the Jegang Group. He is a strong public figure, holding power over the politics and economy of the country. Seo Eun Soo is a talented miniature sculpture. As the daughter of a prestigious family, she always carries herself with dignity. Suddenly, one night, she encounters a tragic incident which changes her life. She faces various challenges in order to save and protect her family.

The Road and Penthouse have a very similar plot line where you can trust any character, and in both the K-dramas, women or females are fierce, knowing how to fight to hold what belongs to them. Also, The Road is a Korean-Korean drama like Penthouse, which showcases the hard and mysterious lives of top-class families.

More TV, Netflix and Amazon Prime shows to watch if you liked The Penthouse: War in Life: