14 Korean Dramas Like The Legend of the Blue Sea 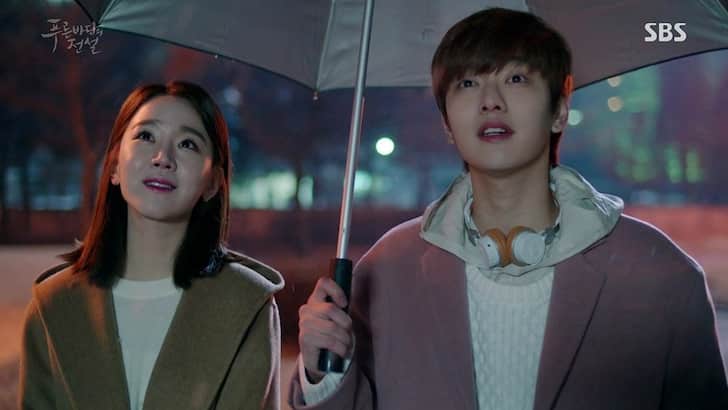 The Legend of the Blue Sea is a South Korean series released in November 2016 with a peak audience rating of 21%, having 20 episodes and directed by Jin Hyuk. This series is based on the story of a fisherman, Kim Dam Ryung (Lee Min-Ho), and a mermaid named Se Hwa (Jun Hi Hyun). This fisherman captures and kidnaps the mermaid.

The story begins in the period of August 1598, when the newly appointed governor, Lee Min-Ho, releases a captured mermaid, Sim Chung (Gianna Jun), into the sea, and before she swims away, she reaches out her hand to Dam Ryung, which he holds tightly.

In present-day, a conman named Heo Joon Jae, a smooth-talking man with magician-like abilities stays near the ocean resort in Spain to escape as he swindles a large amount of money from a wealthy suspect’s mother. Meanwhile, the mermaid Sim Chung gets caught in the tidal wave and is thrown ashore near the resort, where she meets Joon Jae.

The series is based on how these two meet and things get in their favors as they fall in love with each other, but sadly, they have to part their ways as seeing Chung in pain, Joon Jae decides to be the bigger man and allow her, the love of his life, to return to the sea as she can continue living in the ocean, but it was difficult for her to live on land.

If you loved this show and are looking for more recommendations, then check our list of similar K-Dramas like Legend of The Blue Sea (Pooreun Badaui Junsul) below.

Best Korean Dramas Similar to The Legend of the Blue Sea:

This series was released in May 2019, directed by Lee Jung-sub. It has 32 episodes. Shin Hye-sun, Kim Myung-soo, Lee Dong-gun, Kim Bo-Ii, Do Ji-won, Kim In-Kwon. The story is based on a carefree angel who wants to return to heaven and is assigned the impossible mission of finding true love for Yeon-Seo.

The plot starts when, instead of finding someone for her, he himself falls in love with her. Yeon-Seo is a talented and successful ballerina, who’s arrogant towards everyone, including her family members, after her devastating accident that left her blind. But as she interacts with the angle (Dan), her personality changes and she starts taking things positively. This story is soft yet heart-breaking and a must-watch K-drama.

This K-drama is counted in the list of Korean Drama Legends of the Blue Sea as both of these portray the impossible love story of the leads with hilarious plots, making it a perfect well-balanced series to watch.

My Roommate is adapted from a webtoon originally based on the folktale of Korea featuring Gumiho, aka a nine-tailed fox, played by Shin Woo Yeo (Jang Ki Yong). He has lived as Gumiho for the past 999 years, waiting to turn into a human completely.

In order to do that, he has to indulged a fox bead, which was accidentally consumed by a college student named Lee Dam while she was drunk. That bead inside her body can take her life, knowing that Woo Yeo tells her the truth about the bead to save her life.

They decided to live together until they found a solution to this problem. But things were not as easy as they seemed to be because they were stuck in a live and dead scenario.

The following story is about finding ways to live together as humans after Woo Yeo and Lee Dam start loving each other. This story resembles the storyline of Legends of the Blue Sea.

3. Tale of the Nine-Tailed (Gumihodyeon)

This drama was released in October 2020 with a total of 16 episodes and is directed by Kang Shin-Hyo. This drama is based on an enthralling blend of fantasy, action, romance, and thriller elements. The cast includes Lee Dong-Wook, Jo Bo-ah, and Kim Bum.

The drama gained more fans because of the return of Kim Bum after many years of hiatus. On a mission to capture a killer fox, Lee Yeon (Lee Dong-Wook), a guardian of the mountain spirit Baekdudaegan, is a city dweller who is assisted by three people.

On a mission to capture a killer fox, he attends a wedding where he is certain the fox will be. The fox is in disguise as a woman who is to be the bride. The female lead, Nam Ji-ah (Jo Bo-ah), spots the male lead and is suspicious of his appearance of being supernatural, so she does some research and finds out that he’s a fox.

They join together to find her parents, who went missing in a car accident when she was a child. The story continues with many enemies and suspense as they try to solve the mystery.

The Tale of the Nine-Tailed is a Korean drama like “Legend of the Blue Sea” as it follows the urban myths of the past and follows the reincarnation of past lovers who are fighting to change their destined fate. Both the dramas also showcase bromance.

A 16-episode long series directed by Jung Dae-Yoon was released in July 2016, starring Lee Jong-suk, who has given brilliant performances in series like “While You Were Sleeping,” “Romance is a Bonus Book,” “Doctor Stranger” etc. The female lead is Han Hyo-Joo.

Two Worlds is basically a mixture of real and webtoon life, which was written by Han Sang-hoon, a very famous writer who lost his wife and was living with his daughter, Oh Yeon-Joo, a practicing doctor. The story takes a turn when two alternate worlds collide with each other.

Sang-hoon’s main character, Kang Cheol, is the main character in his webtoon who was falsely accused of murdering his family just because he was a trained shooter. The writer never made the face of the villain, which created problems in both worlds.

As Yeon-Joo unwillingly lands in the webtoon world, she saves Kang Cheol multiple times. Doubting the situation, Kang Cheol asks Yeon-Joo about the reality. After knowing that he is a character built up in a webtoon, he seeks revenge. This drama is not just about revenge, but also about love and two different worlds interacting with each other.

The comedy, romance, and fantasy plotline are similar to Legends of the Blue Sea, featuring revenge and action with a cunning male lead and how to seek justice from them, their family, and their group.

This series was released in December 2018. It has 16 episodes throughout the series and is directed by Ahn Gil-ho. The leads are Hyun Bin and Park Shin-Hye. It focuses on science fiction, fantasy, action, thrillers, and romance.

The drama was praised for its creative and unexpected twists. Yoo Jin-woo is the founder of an investment firm that meets a woman in Spain who owns a hostel. He comes to Granada in search of the owner of a reality game.

As he was unable to find the creator, he enlists the help of the hostel’s owner, who turns out to be the creator’s elder sister. In the real world, they individually search for Jung Hee-Joo’s (Park Shin-Hye) brother. While doing so, they fall in love with each other in the game.

As they come to know each other’s identity, they work together and try to reach the end of the game. In the process, she loses the main lead and still has the hope that he is alive somewhere in the game.

This K-drama has a similar plotline to Legends of the Blue Sea with a heart-wrenching suspense ending of “Will the past lovers be able to complete their incomplete love story or not?” Also, mediaeval and past fantasy plots are common in both.

More Korean dramas to watch if you liked The Legend of the Blue Sea: