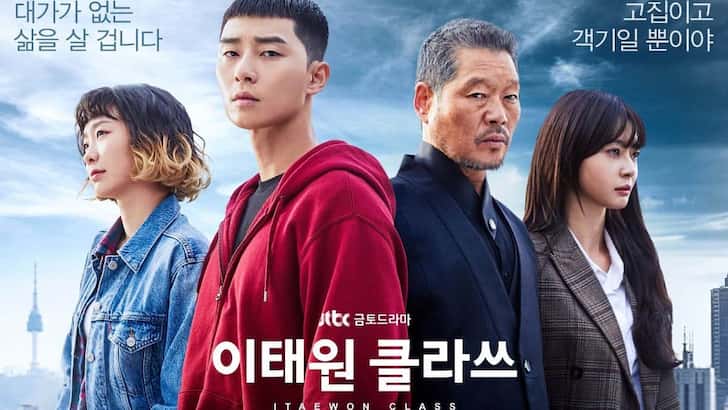 Park Sae-ro-yi (Park Seo-joon), a kind-hearted but hot-blooded boy who can’t stand wrong. His life went upside down after he beat up Jang Geun-won (Ahn Bo-hyun), the son of influential restaurant (Jangga Group) owner Jang Dae-hee (Yoo Jae-myung). Sae-ro-yi again brutally beats Geun-won furiously, who was responsible for killing his father in an accident. After seven years in prison, he vows to seek revenge against the Jangga Group by thriving in the restaurant business.

He opened a pub called Danbam located in Itaewon. While he is unable to handle his business, Jo Yi-seo takes the place of the manager of Danbam. She is a social media personality with a high IQ and is highly capable of doing multiple tasks. Sae-ro-yi was her classmate and so-called first love. She may appear to be a sociopath due to her outgoing and ready-to-fight personality but has a soft corner for Sae-ro-yi and her work place. Building an IC company took a lot of effort, fights, and emotions.

Itaewon Class (Itaewon Keullasseu) is a K-Drama with a perfect blend of life, business, and romance with a new and refreshing concept. It tells stories of young people with dreams and ambitions who are ready to stand despite all the struggles they are facing at a young age in this cut-throat competitive world and are warm-hearted. It is different from fantasy and romance dramas that speak about real-world struggles and careers.

Itaewon class have one badass female lead, Jo Yi-seo, who knows what they want and is ready to answer whenever needed. Also, this K-drama doesn’t extend its story and plots beyond reality. The natural acting performance makes this K-drama feel its emotions through the screen. The set up and plots are arranged quite well so that the audience can relate to them in real life.

Fight For My Way is a K-drama featuring normal adult characters who are struggling with careers and personal lives but are still childlike adults with dynamic personalities. There is no rich Oppa or a classic rich businesswoman with lavish locations in K-drama. Also, there is no ultimate villain or negative character to hate.

The whole thing revolves around four childhoods friends,Ko Dong-man (Park Seo-Joon) and Choi Ae-ra (Kim Ji-won) as a lead couple and Kim Joo-man (Ahn Jae-hong) and Baek Seol-hee (Song Ha-Yoon) as a side couple. All of them are unqualified and left out, and those who are struggling with hardship in order to survive in the real world still have big hearts. They fight emotionally and work hard to achieve their big dreams and eventually come closer to supporting each other as friends.

Fight For My Way is a K-drama like Itaewon, since it both presents friendship and a referential concept to which the audience can relate. Well balanced, hilarious and emotional moments are good to run along with each episode. Choi Aera and Jo Yi-SEO (Kim Da-mi) are unlimited fierce girls, ready to raise their hands whenever provoked.

So Not Worth is a story of a rookie batch of college students living at a student’s residence. It purely entertains the audience with common student life in Korea and their experiences, featuring college affairs.

Young-jae is the son of the owner of a huge Korean food franchise. Minnie is a foreign student from Thailand, a die-heart fan of K-drama, Jamie, an international student, and Hyun Bin, a dispossessed student. The drama is a fun-packed sitcom to brighten the viewer’s mood.

So not worth It and Itaewon Class are beautiful K-dramas with funky and color-full vibes. Each of them promotes street art and features foreign (non-Korean) actors to make it appealing on screen, which is something new to watch in K-dramas.

The Hospital Playlist (highly recommended) is a K-drama with no villain or antagonist to divide the attention of the audience. The storyline of the drama mostly revolves around five college friends who have grown into professionals. Lee Ik-jun (Jo Jung-suk), Ahn Jeong-won (Yoo Yeon-Seok), Ahn Jeong-won (Yoo Yeon-Seok), Yang Seok-hyeong (Kim Dae-Myung), and Chae Song-Hwa (Jeon Mi-do).

These five reunite as a band when working as doctors/professors at Yulje Medical Centre. Each one of them radiates different energy through their characters and are the ultimate chaos when together. The whole series portrayed the lives of doctors, from college graduates to respected, skilled doctors.

Like Itaewon Class, the K-drama presents various life stages and struggles in a very realistic plot. Featuring several iconic and hilarious moments with well-paced direction, these dramas have truly created a soft corner in viewers’ hearts. Both dramas have come up with plots that are different from the typical romantic K-dramas.

Starting with Sa Hye-jun (Park Bo-gum), a charming model with sharp features and an aspiring actor, He never gave up upon his dream despite of failing in several audition for to become a actor and slowly starts creating his presence as an actor. Won Hae-hyo(Byeon Woo-seok) is also an actor and model in the same industry and best friend of Hye-Jun, he comes from a rich family.

Ahn Jung Ha (Park So-dam) is an ordinary hardworking girl who left her office job in order to open her own beauty salon. She is also an makeup artist in the same industry .She always tries to put a smile on her face and stay cheerful even after her internal struggles. The following story is shows the record of this youth generation concurring their dreams with enthusiasm and supporting each other rather putting each other down in today’s competitive world.

Record of Youth is a countdown of Korean dramas like Itaewon Class, presenting young people who strive to achieve their dreams and find the love they desire. It also shows the importance of friends who stand by our side all the time, with whom we can empathize. In an ultra competent world, their storyline depicts characters that are career-oriented and work hard to achieve their goals.

In a world full of fierce competition in the high-tech business sector, this story is about youth with ambition and a dream of building a successful start-up. This all takes place in a fictional Silicon Valley in Korea. The main lead, Seo Dal-mi (Bae Suzy), is a dropout and a hardworking woman who wants to become a pioneer in the revolution in industry and is capable of managing a company.

Nam Do-san (Nam Joo-hyuk), a young genius and owner of Samsan, a tech company with good tech products but fails to make profits. Kim Seon-ho, who plays Han Ji-pyeong, and Kang Han-na, who plays Won In-jae/Seo In-jae, are the other two main characters. Dal-mi and Do-san encounter each other, developing feelings between them.

Start-Up is added to the list of K-dramas like Itaewon Keullasseu, subtly portraying the career struggles of the younger generation of today. Along with that, these K-dramas have strong female leads and charming male leads struggling with their businesses. Strong friendship and mutually developing relationships make this drama more appealing.

More Korean dramas to watch if you loved Itaewon Class: