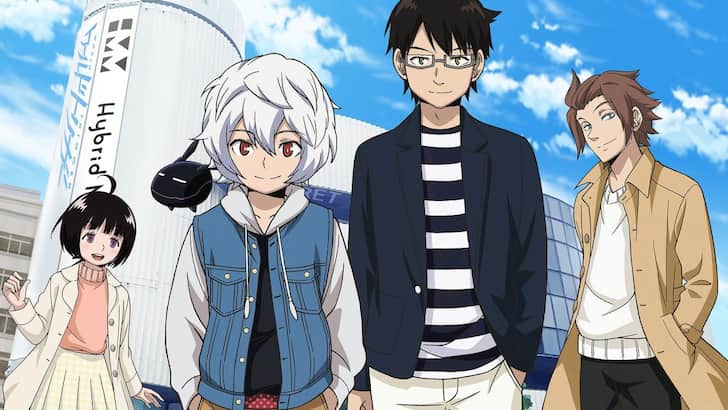 World Trigger is based around a strange gate that suddenly appears out of nowhere. Monsters called Neighbors start pouring out of that gate with complete immunity to any damage. The only way they can be defeated is through special weapons called Triggers.

This is why the Border Defense Agency gets established with the main target of protecting the world against these monsters.

Check out these Anime like World Trigger, which utilizes the concept of an organization that keeps the humanity protected against strange creatures.

When you are going on a school trip, the last thing you would expect is to get attacked by monsters. Our main character, Shio Ogura, finds herself in a similar scenario while going to Taiwan. But luckily the DOGOO organization arrives and their E-Gene holders begin battling against the monsters.

In a sudden turn of events, Shio also awakens the power of a historical figure within herself and proves that she is also an E-Gene holder.

Similar to World Trigger, we find a group of people in Nobunagan who protect the world from monsters.

This story is set in 2021 when the world has been terrorized by a virus called Gastrea. It turns humans into monsters and they have to build a wall in order to keep themselves away from it.

The virus can be countered by Cursed Children who are capable of wielding super powers. But since they are mostly young, an Initiator is also assigned to them for their survivability and guidance.

In this way, various teams of two are created who are tasked with exterminating the monsters created by Gastrea. Just like World Trigger, we see that these monsters have a very specific counter and can’t be defeated with anything else.

Ichigo’s peaceful and normal life is disturbed one day when his family gets attacked by an evil spirit. A Soul Reaper named Rukia comes to protect his family and gets injured in that process. As a result, Ichigo is forced to take up her powers and defeat that spirit.

But when Rukia is unable to gain her powers back, Ichigo is tasked with clearing out the other evil spirits in their town.

In the year 2071 the world gets attacked by man-eating monsters called Aragami. They can be killed only by God Eaters who are a part of an organization named Fenrir.

God Eaters are made through special oracle cells that allow them to wield a weapon known as God Arc. Among all these God Eaters, the one that suddenly causes quite a lot of noise is Lenka Utsugi.

This is because his God Arc can become both a blade and a gun which can prove to be huge in this battle against the Aragami. If you loved World Trigger, you will also like the similar plot of God Eater where humanity’s only hope is an organization fighting against monsters.

Eren Yeager has only one goal in life and that is to remove all the Titans from his world. He hopes to join the Survey Corps one day and go beyond the walls that protect them from the Titans.

But unfortunately Eren ends up becoming the very thing he swore to destroy. Now, without any other option available to him, he must muster this new power and help humanity in achieving victory against the Titans.

World Trigger follows the same plot of Attack on Titan where the monsters have forced humanity to back away into a corner.

More Anime shows to watch if you liked World Trigger: