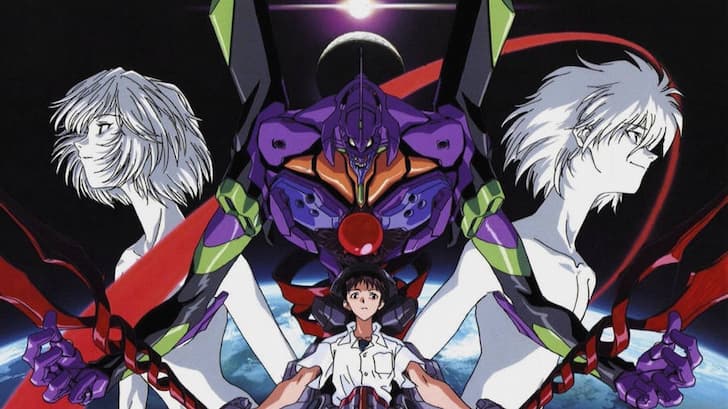 Neon Genesis Evangelion is set in a post-apocalyptic world where mecha units called Evangelion are used to fight against threats known as Angels. This happened after the third impact and NERV took things on their own hand for damage limitations.

Coincidentally the son of NERV’s leader is the only one capable of piloting the best Evangelion unit.

Anime like Neon Genesis Evangelion gives you an action packed adventure in an apocalyptic setting and you can find them below in this list.

1. Darling in the Franxx

Klaxosaurs have been ravaging the world and pushed humanity to a corner. They are close to extinction and need to reside in cities with huge fortresses. The children who grow up in these cities only learn one thing in life and that is to pilot various Franxx.

They are mechas useful in combat against the Klaxosaurs and the sole purposes of these children’s lives revolve around them.

Just like Neon Genesis Evangelion, we see the involvement of mechas that can be controlled by selected few characters.

In order to establish its rampaging military power, the land of Britannia plots a massive world conquest. It starts with Japan which gets renamed to Area 11 after falling to Britannia. In comes Lelouch Lamperogue who is a normal student of Britannia.

He gets caught in crossfire amidst the unrest in the country and gets saved by a special power given to him by a strange and mysterious girl. Similar to Neon Genesis Evangelion, it is a mecha anime with lots of action and adventure.

Eren Yeager is completely devastated when a terrible tragedy befalls him and his family. It gets even worse by the fact that they are caused by the creatures he hates the most – the titans.

Eren resolves to join the Survey Corps and kill every last titan from the earth. But an unfortunate accident sees him becoming the very thing he wants to destroy.

On the flipside he can make good use of these powers and get closer to his dream. If you love Neon Genesis Evangelion, then you will also like Attack on Titan because both are set in a post-apocalyptic world.

A lot is happening in the life of Ayato and it is becoming incredibly hard for him to process everything. It starts with the invasion of fighter jets and him running into a mysterious woman. The woman says that this is the work of Mulians and she is part of the TERRA organization that is focused on fighting these beings.

Ayato runs off on hearing this and goes off to a secluded place with his classmate Reika. His latent power awakes in that place and connects him to RahXephon that can give a major boost to the people in fighting against the Mulians.

In this anime we see one of earth’s last surviving civilisations lying in the ruins of Romdo. Humanoid robots called AutoReivs have been created in order to support the people living in this city.

But a strange Cogito Virus soon starts giving these robots a sense of self. Re-I Mayer is given the task of investigating this situation as she looks to get to the bottom of this virus with the help of her partner Iggy, who is also an AutoReiv.

Both Neon Genesis Evangelion and Ergo Proxy involve mechas in a post-apocalyptic world.