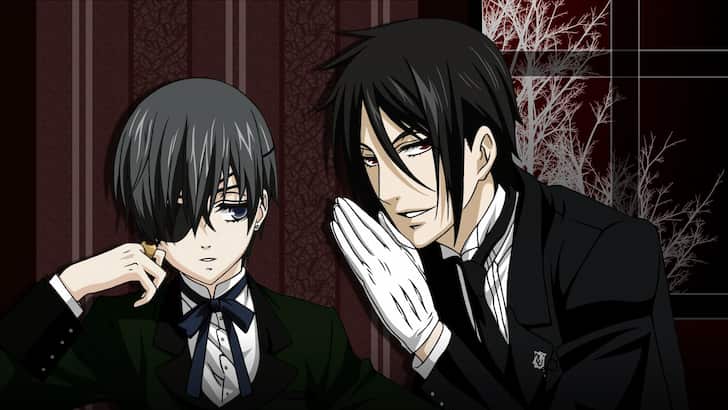 Ciel Phantomhive is the main man who deals with behind the scene events for the Queen of England. He has a partner in crime named Sebastian and the duo has taken care of many unsettling matters. But in reality, Sebastian is a demon with whom Ciel has formed a contract.

Although he acts like a butler for Ciel, he may be patiently waiting for the day when he can finally chomp down Ciel’s soul. Black Butler involves an uncanny relationship between two characters who work together in the journey.

If you liked Kuroshitsuji, you should definitely take a look at our recommendations for other anime like Black Butler below.

Oz Vessalius is next in line to become the head of the Vessalius Duke House. He doesn’t believe in the Abyss and considers it to be folklore only. But when the Baskerville Clan begins to plot to throw him into that Abyss, he realizes that he needs to change his belief once and for all.

Otherwise, he won’t be able to survive the world of Abyss and its creatures will completely annihilate him.

Just like Black Butler, we have a main character here, who comes from a prestigious family and is quite arrogant.

William is a guy who belongs to a very rich aristocratic family. But when his uncle’s business fails and he loses his possessions, it becomes a major concern for William. He goes back to his and tries to frantically look for sellable items with his butler.

In that process, he accidentally discovers a hidden room and summons a devil named Dantalion that brings a new twist to the story.

Similar to Black Butler, there is a rich boy, a butler and a demon in Makai Ouji.

Kazuya Kujou hails from Japan and is a foreign exchange student in one of the schools in Sauville. Since he is quite different in terms of his appearance, his classmates give him the nickname of Black Reaper. Kujou goes to his library one day in search of ghost stories and discovers a peculiar strand of golden hair.

It leads him to a girl named Victorique de Blois who looks like a doll. Soon, this duo gets involved in a lot of mysteries and they need to help each other in order to uncover them.

If you love Black Butler, you will also like Gosick because the chemistry of these two characters is the same as Ciel and Sebastian.

Light Yagami is a very talented student who finds a strange notebook outside his school. He discovers that it is a Death Note which can kill anyone in his world.

The Death Note belongs to a shikigami named Ryuk who decides to stick with Light and see how he decides to use that murder weapon.

Both Death Note and Black Butler have a bright guy who gets partnered up with a quirky demon.

The residents of Cheddar Village take the help of Hellsing in order to counter the vampire in their locality. Hellsing specializes in dealing with such creatures and sends their own vampire to deal with it.

His name is Alucard and he takes care of the situation with only a handgun. But a girl gets wounded in that process and is offered the chance to live as a vampire by Alucard. She accepts the offer and starts her new life in Hellsing.

Just like Sebastian in Black Butler, Alucard is also a supernatural creature in Hellsing.

Also Recommend: 50 Anime with OP MC who Hides his Power