14 Korean Dramas Like Goblin (Guardian: The Lonely and Great... 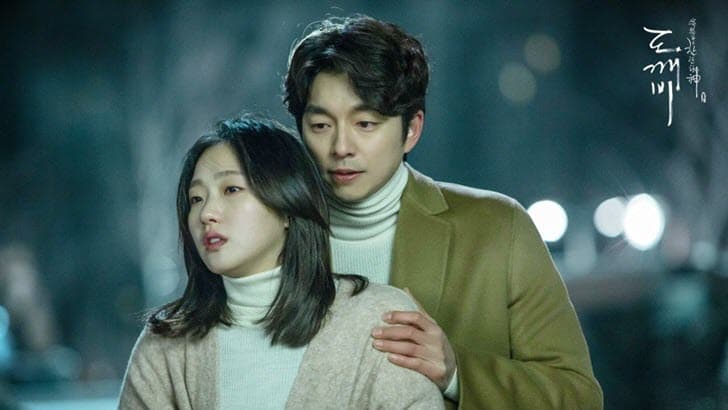 The story starts with Kim Shin (Gong Yoo) as the brave, victorious general of the Goryeo Dynasty who fights to protect the borders of the country for which he has shed the blood of many people. He was loyal and majesty to his people and country, and was praised and loved by his country’s people, which made the young King insecure about his position and divinity.

So he gave an order to kill him (Kim Shin) and his people, announcing Kim Shin as a traitor by pricking his own sword in his heart. But upon the prayers of the people, the Almighty gave him a prize and the punishment of being immortal till the goblin bride comes to remove the sword from his chest in order to walk in the afterlife.

After 1000 years, 19-year old Eun Tak, a high school girl with cheerful and jolly traits, she was saved by the goblin when she was in her mother’s womb and is the goblin bride who can see ghosts. She was raised by her aunt after her mother passed away, who never treated her well. As fate is entangled by the Almighty, she starts working at the goblin’s sister reincarnation, Sunny (Yoo In Na), and the goblin comes across a Grim Reaper (Lee Dong Wook).

The story progresses by revealing the mystery of their lives, which are bound by the God in mortality and immortality. With fate, revenge, romance, and bromance, the drama also has the essence of comedy and romance, thanks to the strong supporting cast. This is one of the most famous K-dramas of all time, with great performances, storyline, acting, and OST (music track). If you are looking for more K-dramas like Goblin (Guardian: The Lonely and Great God) then check out our top recommendations below.

The main lead of the drama is IU as Jang Man-wol, considered one of the most extraverted, confident, and self-proclaimed females of Korean-dramas. She wandered around in search of peace (Hotel of INN) after killing many people to seek revenge for the betrayal of her true love, Go Chung-Myung, who was also killed by Jang Man-wol. As punishment for the resentment she holds, her soul is concealed in the tree which is the root of (Hotel of INN), INN of MOON, a mystic place where all spirits and souls gather on the way to the afterlife, residing along with the real world.

Jang Man-wol becomes the caretaker of the HOTEL of INN to serve the dead. The staff of the hotel are all souls except the manager, who is always a human to handle the business of the HOTEL in the real world. Then enters the male Gu Chan-sung, a Havard return manager of a multinational hotel chain, who was supposed to work for a hotel in Seoul.

But as for the deal made between his father and Jang Man-wol under some circumstances, Gu Chan-sung will be the next manager of Hotel Del-Luna (Inn of Moon). Because of his kind-hearted and sincere nature, Jang Man-wol’s heart softens and makes the tree of INN blossom with flowers, but can she let go of her millennium grudge? That is the plot of the story unfolding some secrets. This is one of the most iconic K-dramas similar to Goblin, featuring a sassy female lead who deals with the journey of the afterlife.

A girl who is born as Sam Jang, a soul to sacrifice for the human race, for protection from evil. She also has supernatural powers and can communicate with ghosts and demons. Because of this, she is distant from her family and peers, except for her grandma, who gave her some protective gear to keep her safe from spirits. When one day, a man in a suit with an umbrella, Ma-Wang (Cha Seung Wan), caught her to get the magical fan from a cave, to which she agreed. There, Jin Sun-Mi is manipulated by Son Oh Gong (Lee Seung Gi) to free him from the curse or prison.

He is the Monkey King, infamous as The Great Sage Equal to Heaven, who was punished by a deity for breaking protocols. He is arrogant and full of himself, and he promises Sun-Mi that he will protect her upon calling his name, but he erases her memory and runs away, leaving her behind.

After years, she runs a real estate business that deals with haunted properties to make profits, where she again comes across Son Oh Gong, but can’t remember his name, and he tries to slide her. Then comes Ma Wang in the scenario, who is an enemy partner to The Great Sage. To teach him a lesson, he gives Sun-Mi a Geumganggo, a magical bracelet that will ensure the obedience of anyone who wears it through the power of love, and Son oh Gong wears it eventually.

As Sum-Mi is a Sam Jang, other demons want to eat her to become immortal and be powerful, which includes Ma-Wang, P.K, and Ma Ji-Young, who all work for Lucifer Entertainment. But because of Son Oh Gong, no one dares to lay hands on her because he always protects her. Later, they all come across an evil dragon that is a threat to humanity and all other demons.

As the drama continues, Son Oh Gong and Sun-Mi fight against evil to protect their love. The drama also has side stories about the supporting cast, which holds you till the very end. This K-Drama is slightly different from other dramas with unpredictable twists.

This is an underrated K-Drama serving up blissful moments between the main leads. Starting with, Na Bong-sun (Park BO-young) works at Sun Restaurant as an assistant. She is an introverted and fearful girl who feels the presence of a ghost. She struggles with her work and often makes mistakes due to her lack of self-esteem.

Somehow, she has a secret crush on the owner and head chef, Kang Sun-woo (Jo Jung Suk). He is a celebrity chef who is serious about his work and is a bit arrogant, but playful. He has a mother and a sister in his family. One day while working, Bong Sun feels a ghost which eventually possesses her (Shin Soon-ae), a female who died in an accident. She used to run a local restaurant with her father and is an amazing cook as well. She is a virgin ghost who possesses bodies to fulfil her desires.

Na Bong-Sun takes over Bong-sun’s body and seduces the Head Chef to leave earth and rest in peace. Kang Sun-woo and the other staff of the restaurant are startled by the sudden change in Na Bong-Sun. She becomes cheerful and confident, which slowly makes Kang Sun-woo fall in love with her.

Shin Soon-ae (Ghost) also gets a chance to visit and help her father through her body and helps Bong Sun get the chef like her back. Then the drama turns into a plot revealing the murderer of Shin Soon-ae, who is related to the Kang Sun-Woo Family, making a mystery unfold for the virgin spirit to leave the human world.

This K-Drama is about a love triangle from the time of Japanese rule in Korea in the 1930s, when three friends who are freedom fighters protest against the Japanese occupation of Korea. These friends have reincarnated into the present, with Han Se-Joo (Yoo Ah-in) as a best-selling writer in a slump who is struggling to write his new, anticipated novel. He has a cold persona and trusts no one easily. He comes from a family of writers and doesn’t have good relations with them because of his stepmother and brother.

Seol (Im Soo-Jung) is a veteran and literature enthusiast who is also a huge fan of Se-Joon, who accidentally enters his home one night, leaving him shocked. And they both start meeting up for the eventual full event. When Se Joon was struggling with his novel, he started using an old typewriter.

Strangely, the next chapters were already typed on the typewriter when he was sleeping. He was shocked but submitted the chapter. After some more time, it happens that he catches a “ghost writer” writing that novel chapter for him. Who can be the third friend out of three? He explains that he came back to find the answer from Jeon Seol’s past about whom she chose as a lover.

As we go ahead in the drama, the truth starts to unfold about friendship, love, and betrayal, turning the story into a different page of thriller. This K-drama in particular has a very unique storyline and great bonding between the trios. The back story of 1930 is presented in a fantastic way, making the drama more enhanced and we thinks the fans of goblin will like it.

This K-drama is a story of love between a mermaid and a nobleman who is incarnated in the present trying to change an ill-fated love story. The mermaid saved him in childhood and since then they have always loved each other, but Kim Dam-ryeong was forced to marry against his will and jump in the water when the mermaid again saved him and erased all their memories from his mind.

Later, as their fate made them meet again, the mermaid is caught by a fisherman who wants to earn a profit by selling her scaled lower body, but Kim Dam-ryeong saves her and lets her back into the sea. When he tries to meet her again, he finds that fishermen are coming again to catch her, and they both die in order to save each other with a bracelet.

After years, the nobleman is incarnated as Heo Joon-Jae and the mermaid is reborn as a mermaid, later named Shim Cheong in modern days. Joon-Jae grows up as a con artist (a scammer) with his hypnosis skills and wits with a handsome face while finding his mother after his parents’ divorce.

While on a trip to Spain, he finds a suspicious girl in the room who is a mermaid. She again saves him. Later, he keeps her in his house and they slowly get closure with each other. But history repeats itself and their ill fate again encounters them. This time, they fight back to change their fate for love.

The Legend of the Blue Sea is undoubtedly a must-watch K-drama like Goblin on the list, with amazing leads and a storyline with a good supporting cast. The drama is the perfect blend of romantic fantasy and historical reality.

More K-Dramas to watch if you liked Guardian: The Lonely and Great God (Goblin):