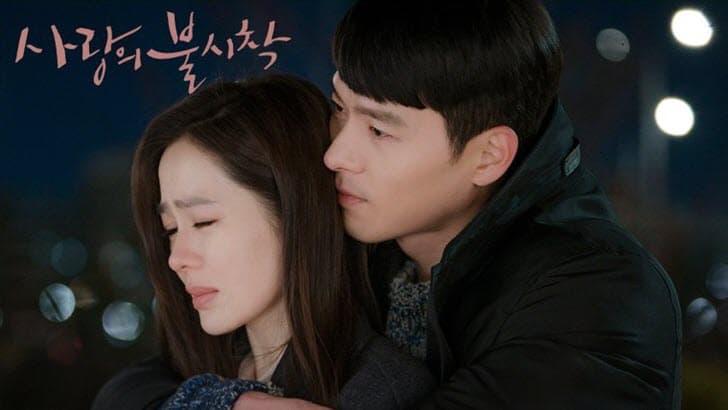 The storyline of Crash Landing On You follows Song Yeri, a woman born into a wealthy family who runs her own company, Seri’s Choice. Seri, on the other hand, chooses to go paragliding in Seoul one day to try out a new product. However, a sudden tornado throws her off course, and she ends up in North Korea’s demilitarised zone (which is a forbidden area for South Koreans). By coincidence, North Korean officer Ri Jeong Hyeok sees her stuck in the treetops. He hides Yoon Seri in North Korea and gives her refuge until he can get her out of the country and back to South Korea.

The four soldiers who work alongside Jeong Hyeok not only help to hide Seri, but they also become a huge part of her life. They were entertaining and gave a lot of laughs. Also, there is another boss lady of North Korea in this K-drama, Seo Dan (Seo Ji-hye) as the ex-fiancée of Ri Jeong Hyeok, a pair with Gu Seung-jun (Kim Jung-Hyun).

Crash Landing On You may have been a traditional rom-com, but the way it was written and executed made it such a fantastic Korean drama to watch. You can’t help but wonder how Seri will return home. Other plotlines include what happened to Jeong Hyeok’s brother and Seri’s familial difficulties. Despite the distance between their countries, which puts their love to the test and romance blossoms between them.

Check out our list of recommendations for more binge-watching K-dramas like Crash Landing On You, that showcase romance, friendship, family and tragedy with a strong female lead.

Starting with Ko Moon-young as a youngster, the first few episodes are perplexing and fascinating. Based on the animation and narration, you can even consider it a fantasy series. It may appear to be a romance drama, but it raises some serious issues. This is one of the reasons you’ll be hooked till the end. It will pique your interest.

Moon Gang-tae (Kim Soo-hyun), a community health worker at a psychiatric institution who has no time for love, may appear uncomplicated, but he has his own challenges, particularly as a brother, which impedes him in everything he does. Ko Moon-young (Seo Ye-ji), a successful children’s book author who has never known love and suffers from an antisocial personality disorder. Following their first meeting, Moon Gang-tae became Ko Moon-obsession. The two gradually begin to heal each other’s emotional wounds. The story begins to reveal the truth about their pasts, which has plagued them their entire lives, as the series progresses.

Sang-tae (Gan Tae’s brother) finally welcomes Ko Moon-young as a member of their family. This k-drama is about more than simply a couple’s relationship; it also deals with family concerns, which are a complex subject to begin with. Ko Moon-young had never known happiness outside of her family until she met Gang-tae and Sang-tae. It enabled her to move on from her past.

Ko Moon Young is undoubtedly the strongest badass lead in K-Drama, with a fierce personality paired with subtle Gang Tae. It was the most highly rated K-drama of 2020, which is about mental health. Everyone is in a bind. Even the stories of the supporting characters are thorough and realistic, and you will be moved by them. It gives me great pleasure to see people recover from their horrific experiences and return to normalcy. Also serving as the most iconic K-drama chemistry and scenes.

This K-drama is about Do Bong-soon, who has inherited supernatural powers of great strength from her maternal family. She tries to hide her powers but can’t help when someone is in trouble. While fighting with some thugs, she caught the eye of the CEO of Ainsoft, Ahn Min-hyuk (Park Hyung-Sik). Because he is a chaebol heir and his father wants him to be in charge of the business as a successor, he always has life-threatening attacks on him, for which he hires Bong Soon as his bodyguard.

Bong-soon has a crush on her childhood neighbor, Guk-doo (Kim Ji-Soo), who is a policeman solving the serial murder and kidnapping cases taking place in their street. Later, that psychopath kidnaps Bong-Soon’s best friend, after which she is determined to catch and punish the culprit.

Min-hyuk also helps in finding the culprit, and both end up falling into a trap, where Bong Soon loses her power. They eventually fall for each other over the course of time; serving with some heart-fluttering senses. She later gets her power back because of love.

However, the female lead in this K-drama is average. But she is breaking the stereotype with her physical ability and defined personality, packed in cuteness with a charming male lead. The chemistry between the leads and the suspicious storyline keeps you stuck till the end.

Starting with a determined weightlifter Kim Bok Joo, is the daughter of a former weightlifter. She is the best performer in her team who is sincere and dedicated to weightlifting. She might have strong exterior characteristics, but she is also just a girl who wanted to look pretty in front of her crush, Jung Jae-Yi (Lee Jae-Yoon).

She met a doctor whom she met on the street on a rainy day. His kind and gentle personality made her fall in love with him. It was the first time she experienced such a feeling because she is always busy with training. As she is a weightlifter, she needs to put on weight rather than lose it like other normal girls, but she starts visiting the weight loss sessions of Jung Jae-Yi.

While all this was happening, she met a childhood classmate, Joon-Hyung’s (Nam Joo-Hyuk). He is a talented swimmer and the younger brother of Jung Jae-Yi. Bok Joo and Joon Hyung recognise each other after meeting a few times, and he always teases and provokes her, especially after knowing that Bok Joo has a crush on his brother. But you can also help her out when she needs it and gradually fall in love with her.

Later on, they started dating and helping each other during hard times. While Bok Joo helps Joon-Hyung cope with his trauma, because of which he has panic attacks during tournaments, he also helps Bok Joo’s father during his surgery. Also, this K-drama has several funny and iconic scenes worth watching throughout the whole drama, which has no dull moments.

This K-drama is based more on real-life events and the struggles that young people go through. Despite internal struggles, Kim Bok Joo is always dedicated to her career and never turns back to her family and friends, and the same goes for Joon Hyung, who always puts on a smile even when he is broken inside. Weightlifting Fairy is one of the most highly recommended underrated K-dramas with sporty and playful bickering leads.

This list can not be complete without the “Descendants of the Sun” – a must watch K Drama like Crash Landing On You. This is among the first K-drama to be dubbed in other languages for broadcast in countries. It starts when the captain of a Korean Special Forces unit, Yoo Shi Jin (Song Joong Ki), catches a thief on his day off alongside his friend and fellow soldier Seo Dae Young (Jin Goo), he has a chance encounter with a hospital trauma surgeon, Kang Mo Yeon (Song Hye Kyo).

Although he immediately falls for her, Mo Yeon mistakenly believes Shi Jin is a part of the thief’s criminal gang, but after he proves the truth, they begin an unlikely relationship. Yet it doesn’t take long for the couple to realize they have conflicting views on human life – with Shi Jin having to kill to protect lives while Mo Yeon does everything she can to save them.

After they decide that these philosophical differences are too much to overcome, they decide to end their relationship and Shi Jin is deployed to the fictional war-torn country of Uruk. Some months later, Mo Yeon is put in the awkward position of rebuffing her hospital director’s advances.

As revenge, she is assigned to a team of medical volunteers who travel to Uruk, setting up a reunion with Shi Jin where they bond over their differences and discover how powerful love can be.

From space travel to alien-human romance, My Love from another Star has a very unusual concept. The concept of space travel is intriguing since it differs significantly from the time travel concept depicted in numerous K-Dramas. Unrequited love [Hee Kyung’s affection for Song Yi], fame vs. family, success and downfall, as well as friendship and betrayal, are all themes explored in MLFAS.

Jun Ji Hyun (Cheon Song Yi) was a sarcastic actress who may have been brash and sloppy but was dedicated and compassionate regardless. Her or her brother’s comedic interactions with the alien Do Min Joon made this worth it. On the other hand, Kim Soo Hyun–alien Do Min Joon–seemed to have a lot of pent-up emotions and words, and he was slow to speak and make decisions.

He’d been on Earth for 400 years and yet didn’t seem to get humans or comprehend why they tried so hard despite their short lifetimes. Because she lives in the moment, Song Yi is a perfect fit for him. But she also reminded him of someone he knew and cared for in the past. Because of the chemistry between the leads, This K-drama features several beautiful moments.

This K-drama also has epilogues that are just as entertaining as the episodes themselves. The character development was helped by the snippets. It’s added to this list because of Cheon Song Yi’s character and Do Min Joon’s slow wit, which is quite similar to Crash Landing On You.

More Korean dramas to watch if you liked Crash Landing On You: