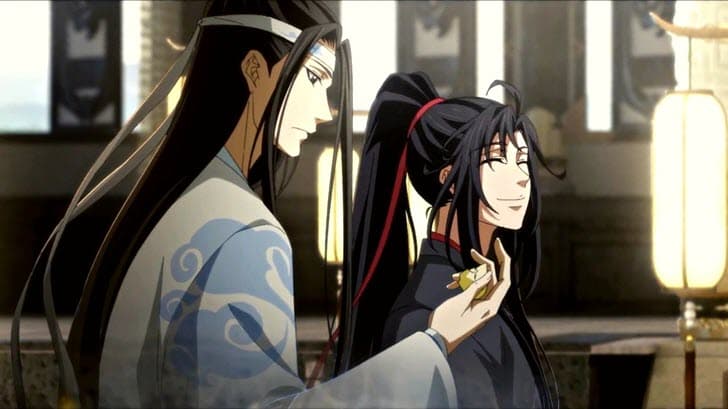 Grandmaster of Demonic Cultivation is an incredibly popular donghua. It is so popular that literally everyone who is introduced to the world of donghua sees this one first. Wei Wuxian stars in this story and messes with the dark art that sees his power attaining meteoric heights.

Mo Dao Zu Shi (MDZS), is a BL donghua that involves reincarnation. So, if you are into this genre here are some more Donghua like Grandmaster of Demonic Cultivation.

Xie Lian has descended from being a famous martial god to a scrap-collecting god on his third ascension to heaven. His first mission itself is too weary for him when suddenly a mysterious man in red guides him.

If you are looking for a donghua like MDZS (The Founder of Diabolism) that has Boy Love aspect in the story with cultivation then this is our number one recommendation.

Shen Yuan believes that everything he has read in Xianxia novels will come true. The main character of the novel will defeat his scumbag master and achieve a harem as the prize. But when Shen gets transmigrated to the world of Proud Immortal Demon way, he gets the role of Scumbag Master instead of the protagonist.

Now, he has to ensure that he changes the ending of the story and doesn’t taste defeat at the hands of his disciple. This is yet another engaging Donghua Similar to Grandmaster of Demonic Cultivation, which is based on Boys’ Love.

Spiritpact is a beautiful story about You Keika. He works hard at a part time job to raise money. But after an encounter with an exorcist, he gets killed and becomes a spirit. The name of the exorcist is Tanmoku Ki and he forms a pact with You whereby both of them will offer each other protection.

It marks the beginning of the journey for the duo that goes on to encounter numerous vile spirits and defeat them. Both of these donghua have two characters that form an unexpected bond which grows with the progress of time.

This donghua is about a pair of twins named Xiaotu and Xiaohu. Aside from being blood brothers, they are also detectives. But unlike normal detectives their specialization lies in handling supernatural cases.

While solving one such supernatural case, they get caught up in some events that will test every ounce of their strength. As we saw in Grandmaster of Demonic Cultivation, here we find the main characters solving a mystery that seemed very hard to crack.

In this donghua we follow the story of Tang San who steals the forbidden secrets of his clan. After gaining that knowledge, he thinks that his life is fulfilled and commits suicide from Hell’s Peak.

But instead of dying, he gets reincarnated in a world which is devoid of magic and martial arts. It is a completely new environment for our protagonist who needs to use his past knowledge to survive there.

This is another must watch Chinese anime like Grandmaster of Demonic Cultivation, here the protagonist gets reincarnated in a different world and the focus in this donghua is mainly about cultivation.