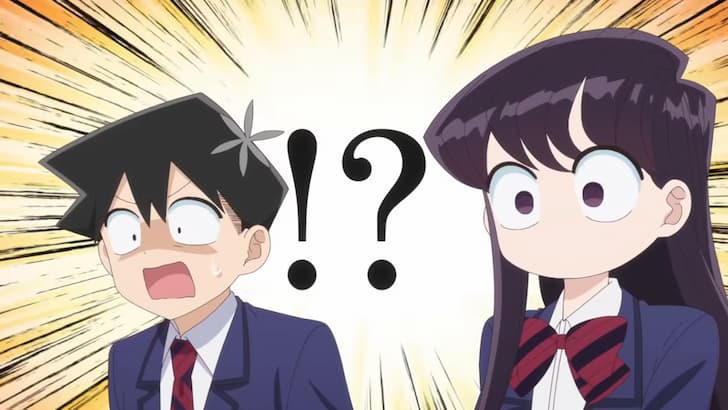 Komi Can’t Communicate is a wholesome, slice of life anime that will surely soothe your soul. The male lead role in this story is played by Tadano whose plan of a quiet high school fails on the first day itself when he sits beside the most beautiful girl in the class, Komi.

Through a bizarre turn of events, Tadano comes to know about Komi’s anxiety and communication problems. He decides to help Komi in making 100 friends and becomes her first friend in that process.

Komi Can’t Communicate (Komi-san wa, Comyushou desu.) is an anime that you can watch in any mood and here are some recommendations similar to it.

The story of this anime is exactly what it sounds like. Love is war and the war is between Miyuki Shirogane and Kaguya Shinomiya. They are the president and vice-president respectively of their school’s Student Council and also considered as the best couple by everyone around them.

However, Miyuki and Kaguya consider it as a battle and whoever confesses first will be the loser. In both these anime you will find a romantic comedy setting as love blooms between the two leads.

Kyouko Hori and Izumi Miyamura are like two poles of a magnet. Naturally, everyone thought that there was no chance they would gel with each other. But fate had other plans and when Hori and Miyamura had a chance encounter they came to know about a different side in each of them.

They also discovered they share some similar interests which led to them spending more time with each other.

3. Don’t Toy With Me Miss Nagatoro

Naoto just wants to lead a peaceful school life and work on his manga. But the first year student, Nagatoro has some other ideas as she looks to take advantage of Naoto’s meek personality and tease him continuously. Naoto is indeed in a jam and doesn’t know what to do to get out of it.

But as he passes more time with Nagatoro he realizes that it can be quite fun to be around her. She has brought that spark in his life that he used to miss previously.

Similar to Komi Can’t Communicate, the two characters form an unexpected bond that benefits each other.

4. The Pet Girl of Sakurasou

Sorata Kanda has recently moved to the Sakura Hall of his school due to some abandoned kittens. The students in the new dorm have made his life difficult to stay and the only way he can go back to his old dorm is if he finds a new home for the kittens. But when a new student named Mashiro Shiina joins his school, Sorata’s plan of moving back comes to a halt.

These two quirky characters will now change everyone’s lives around them as it marks the beginning of a beautiful story.

If you love anime like Komi-san wa, Comyushou desu., then you will love this anime too because of its wholesome nature and how the male and female protagonists connect with each other.

Kazuya Kinoshita is shattered after his girlfriend Mami breaks up with him. In order to heal himself, he hires a rental girlfriend. But the stories about his rental girlfriend, Chizuru worries him and he leaves a negative rating.

One thing leads to the other and now Chizuru has to keep on acting as his girlfriend even though Kazuya is obviously hung up on Mami.

As we saw in Komi Can’t Communicate, here we will see two wandering souls crossing paths that will be beneficial to both.

6. Hitoribocchi no Marumaru Seikatsu
7. My Little Monster
8. Words Bubble Up Like Soda Pop
9. Handa-Kun
10. Senryu Girl
11. High Score Girl
12. WataMote: No Matter How I Look At It, It’s You Guys’ Fault I’m Unpopular!