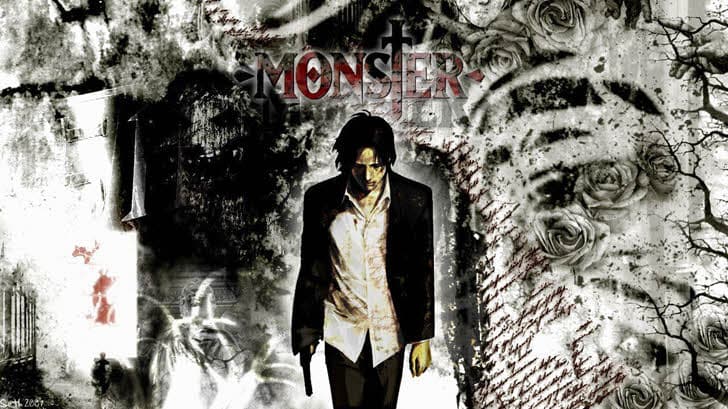 Monster is a highly underrated thriller anime that does not often get the credit it deserves. It involves a neurosurgeon named Kenzou Tenma who is set in his principles of being a doctor. One day he is caught in a dilemma of whether to save the mayor of the city or a little boy named Johan.

He ends up saving the boy and loses everything in life. But after some days all the obstacles in his life suddenly disappear and it may have something to do with the life of the boy he saved.

This anime will take you on a thrilling ride and if you are a fan of this genre, here are some must watch anime like Monster that you will enjoy for sure.

Death Note is a very popular anime series that most people know about. It is literally the very first anime that anyone watches. The character in focus in Death Note is a boy named Light Yagami who comes across a Death Note with the power to kill anyone in the world.

He takes justice into his own hands, while on the other side a guy named L is determined to catch him at any cost. Similar to Monster, this anime will make you glued to the screen till you reach the conclusion of events.

Hence this is our No.1 recommendation for the fans who are looking for an anime like Monster with a touch of supernatural element.

The justice system as we know has changed and the Sibyl system is now widely used everywhere. It can judge the threat of anyone with ease and thus the officials can determine a criminal before the crime even takes place.

Akane is a young girl with a strong sense of justice who has stepped into this Sibyl system. She soon finds out that there are a lot of flaws within the system and decides to get to the end of the matter. Just like in Monster, here you will see the main character trying to uncover a secret plot in the shadows.

The people of Musashino City live in constant fear of the Shounen Bat. There is an assailant roaming free in the town, striking down innocent people with a baseball bat. Two detectives jump into the case to try and catch the offender but the number of victims keep on rising.

Will they be able to stop the assailant before paranoia starts creeping in? Both these anime have a mysterious person attacking people in silence that leaves everyone terrorized.

4. Terror in Resonance (Zankyou no Terror)

After a nuclear facility gets taken down by a terrorist attack, the crowd starts to panic. The government is unable to deal with the situation and the police are nowhere near catching the criminals. Amidst all this chaos, a video comes up where two boys throw an open challenge to the police.

Detective Shibazaki gets caught in this act as the police force try to get the situation under control. As we have seen in Monster, here we find an organization that has the threat to cause widespread destruction in the country.

5. Gankutsuou: The Count of Monte Cristo

This story takes place in the year 5053 when two French Aristocrats named Viscount Albert and Baron Franz decide to visit the city of Luna. In that city, Alberto comes across the Count of Monte Cristo who leaves quite a lasting impression on him. He decides to bring the Count back with him to French society.

However, it seems that he has some whole other plan on the back of his mind. These two anime are similar in the aspect that they both have a psycho maniac who wants to commit mass murder.

More Anime shows to watch if you loved Monster: