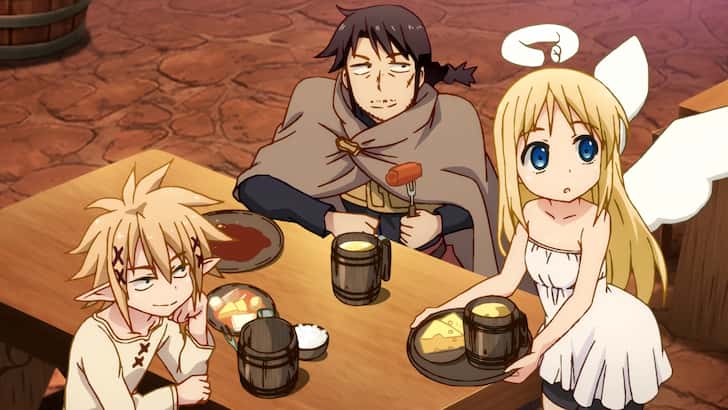 Interspecies Reviewers take place in a world where there are a variety of races ranging from slimes to fairies. Naturally, the brothels in this world are a source of major attraction and entertainment.

Slowly we come across a group of people whose sole purpose is to inform the people about their experience with various succu girls in the brothels.

As you can see Interspecies Reviewers is an ecchi anime in a fantasy setting, so here are some recommendations similar to Ishuzoku Reviewers.

You can probably guess the content of this anime just from the title. In this story we find Kimihito who used to lead a pretty boring life until one day the rule to allow non-human beings to Japan was passed.

This saw our boy being the center of attention of a variety of monster girls, all of whom seek his attention and pleasure.

Just like in Interspecies Reviewers, here you will find the main character engaging in lewd tasks with many attractive characters.

On the outside, Youkai Academy may seem like another normal school but in reality it is the school for monsters. There they learn how to live together with humans and any human setting their foot in that place is to be killed immediately.

Meanwhile, a teenager named Aono finds himself in that school ignorant to the rules and decides to extend his stay after meeting a beautiful girl named Moka.

Similar to Interspecies Reviewers, here you will find a lot of sensual stuff involving non-humans.

Mamori Tokonome does not like her school since she is constantly teased about her name that translates to virgin. One day she gets abducted during her gym lessons and finds herself stranded on Mermaid Island when she opens her eyes.

But she is soon rescued by a fellow castaway, who unlocks Mamori’s abilities through a passionate kiss. This anime have a lot of ecchi scenes that are bound to keep you entertained and a perfect match if you are looking for an anime like Ishuzoku Reviewers.

This anime takes place in a land where every year a queen is chosen through a competition. In the current year’s tournament, one of the participants is shown the door early due to her clear lack of abilities. She is later rescued by a strong warrior only to find herself in a captive cell.

Later the savior decides to free her and go on a journey of proving her might after she gets bored with a noble lifestyle. In Queen’s Blade you will find many attractive characters involved in ecchi scenes that are quite similar to Interspecies Reviewers.

If you liked Interspecies Reviewers, then you have to see this anime, which is one of the best in this genre. Issei is another high school boy who is excited to take admission in a school that used to be an all-girls school.

He soon finds a date too and can’t hold his excitement any longer. But unfortunately his date turns out to be a Fallen Angel who murders him ruthlessly. Luckily, the president of the Occult Club, Rias Gremory arrived swiftly at the scene and saved his life.