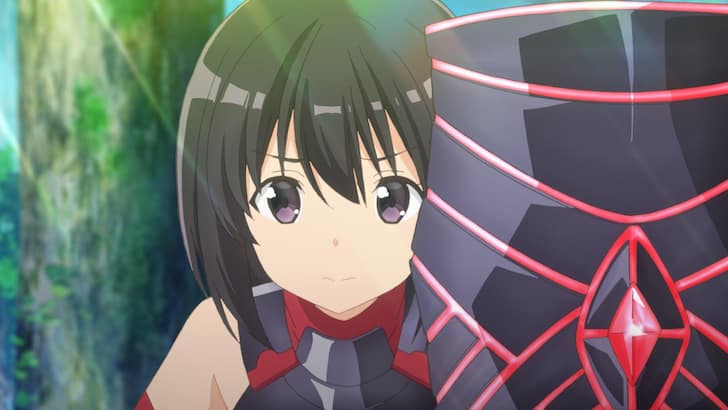 BOFURI is based on a Virtual Reality MMO called New World Online. Our protagonist Kaede Honjou decides to give the game a try after much persuasion from her friend. But since she is a newbie in the game she upgrades her defense stats instead of upgrading her offense stats since she doesn’t want to die.

Luckily, it works out for her and she is able to KO enemies with just a single shot. She also gets third rank in an event held in the game. It takes you along on a wonderful journey of adventure, so if you are a gamer and like these types of anime, here are some anime similar to BOFURI.

Best Anime Shows Similar to Bofuri: I Don’t Want to Get Hurt, So I’ll Max Out My Defense:

1. The Rising of the Shield Hero

The Rising of the Shield Hero has the most similarity to BOFURI. Just like BOFURI we see the main character here has more defensive prowess than offensive. He was brought along to Melromarc along with three other heroes but he was the only one to receive a shield.

As a result he was teased and taunted by the citizens and his fellow heroes. So, our protagonist decided to train himself and get stronger to show that even with a shield he can outshine all the other heroes.

Also Recommend: 24 Anime Like The Rising of the Shield Hero

The main character of KonoSuba is Kazuma Satou who was reborn into a fantasy world. There he met a goddess named Aqua who as all the fans know is quite irritating and practically useless. As we see in most fantasy worlds, the character who gets reincarnated gets a task on reaching there.

Similarly, Kazuma also gets a mission to defeat the Demon King which seems too much for a guy who has just arrived at that place. If you liked BOFURI, you will also love KonoSuba as it is based on a fantasy setting with a comedic base.

This story takes place in 2043 when a full dive Virtual Reality MMO is released in the world. Naturally people are extremely excited about the game and our main character, Reiji Mukudori buys it before going off to college.

He decided to try out the game with his partner and brother as they form a trio. This VRMMO will change the world of gaming and it will open a world of possibilities for gamers. Just like BOFURI, here you will find a fun-filled adventure in a world of virtual reality.

Sword Art Online is an incredibly popular anime that is also based on a virtual reality game. On the first day of the global release, all the gamers logged into the game and were enthusiastic about trying it out. But a cruel fate was awaiting them as they came to know that they were trapped there and if they died in the game, they were going to die in real life too.

Our hero Kirito did not falter at this new information, and went away instantly to explore the game to try to find a solution to get out. Both BOFURI and Sword Art Online take place in a virtual reality game where the characters can upgrade their stats.

It can never be a good thing when you are trapped in a MMORPG as we have seen in numerous cases. But if you are a veteran like our main character, Shiroe then you may just have the chance to survive it.

Shiroe is not a social kid and he has spent most of his time in this game. Now he can use his experience to clear the game and find his way back to the real world. You will find the light-hearted adventure nature of BOFURI while watching Log Horizon too.

Also Recommend: 19 Anime Like ‘By the Grace of the Gods’

More Anime shows to watch if you liked BOFURI:

6. Didn’t I Say to Make My Abilities Average in the Next Life?!
7. Gun Gale Online
8. Kuma Kuma Kuma Bear
9. I’ve Been Killing Slimes for 300 Years and Maxed Out My Level
10. Slayers
11. Ascendance of a Bookworm
12. Princess Connect! Re: Dive
13. That Time I got Reincarnated as a slime
14. My Next Life as a Villainess: All Routes Lead to Doom!
15. By the Grace of the Gods
16. The Saint’s Magic Power is Omnipotent