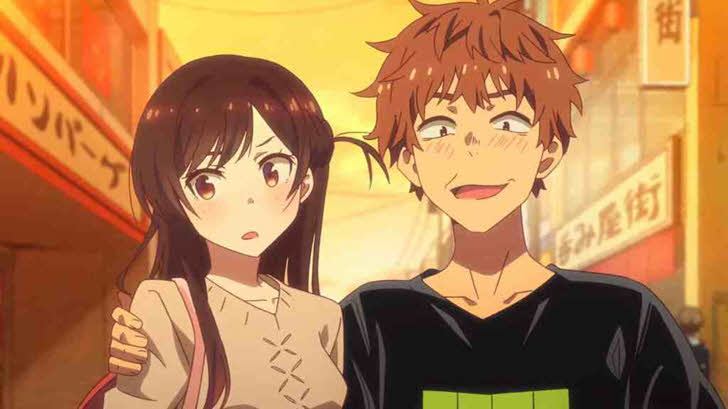 ‘Rent-A-Girlfriend’ is an anime that tells the story of the Kazuya Kinoshita who is very indecisive college student. This is a story about the girlfriend he hire whose name is Chizuru Mizuhara. After few days when his previous girlfriend break up with him. He felt so devastated and depressed. Kazuya stumbles upon a mobile app on which he employs the Chizuru Mizuhara, who is a rental girlfriend. At first Chizuru became his perfect girlfriend.

His family also find out about them, so he didn’t wanted his grandmother to find out that she was a rental girlfriend so he kept renting Chizuru Mizuhara. He was also introduced to other employees of the app but Kazuya Kinoshita and Chizuru Mizuhara started to have feeling for each other.

Rent-A-Girlfriend consists of romantic comedy and intimating talks. The show builds up very emotional connections between characters. If you’re interested in more anime similar to Rent-A-Girlfriend, here are some of the recommendations that we think you will like.

Raku Ichijo ten years ago, promised his early ages lover in a form of keeping a lock pendant as a keepsake while it’s key to his lover. Raku ichijo belongs to a Yakuza family but he always wants ordinary life. Raku still carries the pendant.

One day all the things changed and he meet Chitoge Kirisaki a transfer student. Raku and Chitoge are forced to become lovers as she is a daughter of a mafia boss. There is also a rivalry between their families so both of them have to stop the war. Chitoge and Raku hates each other but still faking their relationship to avoid war between the two gangs.

Just like Rent-A-Girlfriend, the main leads here too pretend to be in a relationship even though they don’t like each other.

Eita Kido left alone when both of his parents left him alone after their divorce. Eito Kido has a goal to graduate from high school and attend medical school. Eita vowed as well that he will never fall for the trap for love and romance and he kept his hatred for it.

After all this struggling life he still has to face the worst nightmare of his life when Masuzu Natsukawa, the most desired girl at school blackmails him into fake romance.

We think the fans of Kanojo Okarishimasu will definitely enjoy this due to its similar story and comedy.

The Red Threads Of Science is a program run by Japanese Government to increase the birth rate of the population. The children when turn 16 are assigned to their potential partners and who don’t comply with them gets severe penalties.

Yukari Nejima confesses his love for a girl he has been crushing from a long time. Misaki Takasaki is that woman. He is assigned to another girl when he turned to 16 whose name is Ririna Sanada. Ririna claims that she don’t have any special feeling for Yukari. Yukari has the same feeling for her. So Ririna decides to help them to get together with Misaki.

Government’s aim is to select marriage partners whether they like each other or not.

4. My First Girlfriend Is a Gal (Hajimete no Gal)

Yukana Yame hides her real side under a false mask. The mask that she is wearing of a sweet and charming girl but it is opposite to it which is that she is unapproachable and reserved with others.

The series focus on Junichi Hashiba, a desperate high school student who want to have a girlfriend at any cost. On the support and courage of his friends, he approaches Yukana and tells her that he loves her. She immediately figures out his real face and intentions but still she accepted his proposal.

This act leads the good image of the Junichi and all the girls in their school started feeling for him as well. It is more of an ecchi anime similar to Kanojo, Okarishimasu (Rent-A-Girlfriend) that you’ll enjoy.

Erika Shinohara a first-year high school student wants to make a impression on her friends. So she make up a story of having a boyfriend. But in reality, she does not have one. On the demand of her friends for picture. She randomly showed them the picture of the pretty boy she saw on the street.

Unfortunately the boy in the picture also attending the same school as Erika. His name is Kyouya Sata. Erika is left with no choice except asking him to be her pretend boyfriend. Kyouya has a attractive personality but sadly he has a cruel personality. Kyouya agrees to help her if she gives him with favors and becomes his loyal “dog”.

Erika is unaware that she is digging her own grave by her hands. By letting this arrogant boy her boyfriend.

More Anime shows to watch if you loved Rent A Girlfriend (Kanojo, Okarishimasu):