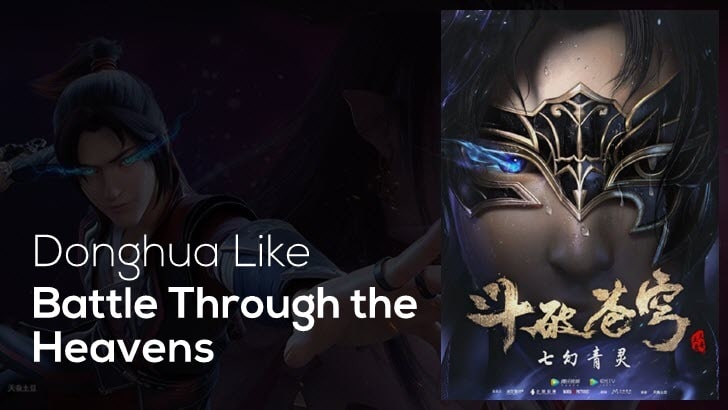 Battle Through the Heavens (Doupo Cangqiong) is a 3DCG martial arts anime that follows Xiao Yan the son of the Xiao tribe leader Xiao Zhan. He was considered to be a martial arts prodigy at a very young age, however he loses all his powers and became weak.

In a world where power and strength matters Xiao Yan becomes an embarrassment to his family after his fiancée breaks the marriage contract with him. Belittled by every one around and shamed by his fiancée he vows to take revenge on her and promises to defeat her in three years.

But how did he lose all his power suddenly? Can he fulfill his promise? Can he restore the lost reputation to the family? We get to see answers to such questions and many more in this amazing series.

Are you like me, who binged all the seasons and are now eagerly waiting for the next episode every week? If so check out our list of similar recommendations for other Chinese cultivation and martial arts anime like Battle Through the Heavens (Doupo Cangqiong).

The life of Lin Dong changes completely when his father is crippled by Lin Langtian, the genius of the great Lin Clan. After this incident his father lost his purpose and became a drunkard. As Lin Dong is weak every one around starts bullying and humiliating him.

Because of this all Lin wants now is to take revenge on Lin Langtian who is the reason for these changes. One day when he is bullied and thrown of a mountain he ends up at the bottom and comes across a powerful talisman which fuses itself inside his hand. This stone holds many secrets and powers in it and this makes him very powerful.

But is this power sufficient to achieve his goal? This show features the adventures of Lin Dong in becoming the most powerful and achieving to reach the top of cultivation in the world. This is a perfect choice for the fans of Battle Through the Heavens who are looking for the story of the character’s evolution from being an underdog to the most powerful.

In a world where the people with strong internal arts rule, Qin Yu, the third Prince of the Qin dynasty does not possess any talent in it. For this reason Qin De, his father send him to a secluded mountain to live with his grand father. To get his fathers approval Qin Yu starts practicing in the external arts considered to be the most difficult and painful to learn.

One day he sees a meteoric Tear falling from the sky and his life changes forever when the mysterious stone fuses with his body. This makes him undergo drastic transformation, with this can he finally receive the approval from his father? Why is his father very cold towards him? What happened to his mother? Get answers to many such questions by watching this donghua.

Similar to Doupo Cangqiong, the main character in this show too starts off week, but turns the table on the opponents and those who belittled his by becoming too strong. This is a perfect martial arts anime like Battle Through the Heavens.

Tang San is the prodigy of the famous “Tang Sect” who are specialized in creating the most powerful hidden weapons. As he is born in an outer sect he does not have access to the Sect’s forbidden knowledge. Hungry for more knowledge he steals the secret knowledge from the inner sect and masters the secret art.

Using this knowledge he creates the most advanced secret weapons and gives it to the Sect’s elder before committing the suicide for his crimes. However, it isn’t the end for Tang San as he is now reborn in a new fantasy world with the knowledge of his previous life.

In this world where the strong prevail and the weak perish how can he survive after possessing a very weak innate spirit. This is another 3DCG martial arts anime similar to Doupo Cangqiong as both the anime follows the main characters who are considered prodigy once must now overcome many obstacles in their way to the top.

Nie Li was the strongest spiritualist in the martial world but lost his life in the great battle against six deity-ranked beasts and a Sage Emperor. However, his soul was brought back to his 13 years old self who was the weakest among his class with very low talent.

But thanks to the vast knowledge he gained and remember from his previous life he sets out to become the strongest spiritualist in the least possible time. Not just him he also starts helping all those who helped him in his previous life progress fast so that in future when the time arrives he could avoid certain death and save his loved ones and people.

If you enjoy a hero who is insulted by every one turn the tables on them and taste them their own medicine then this is a great choice for you.

The anime follows Han Li, an ordinary mortal born in a very poor farmer family. When his family is attacked and their food is stolen by the Feral wolf gang, his is sent to the seven mysteries sect recruitment as a way to earn for his family. Even though he fails the test narrowly he ends up being an unofficial disciple in a minor sect in Jiang Hu.

However, how can a commoner like him with his average abilities survive in the sect. Also what made him follow the path of cultivation that will make him an immortal?

In this new world of immortals he must fight against all odds, defeat the demons of evil, and carve his own path to become a truly immortal. This was an amazingly animated 3D anime with awesome visuals, great production and breath taking action choreography. We think you will surely enjoy this well-made anime if you loved Dou Po Cang Qiong.

More Donghua to watch if you loved Battle Through the Heavens (Doupo Cangqiong):