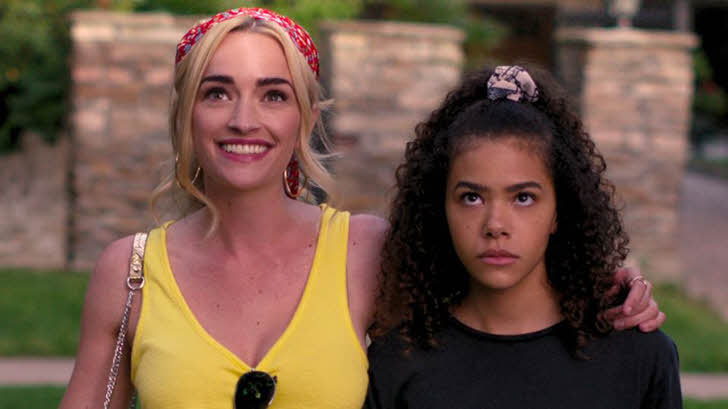 Georgia, only 30 years old, will do everything she can to give her children the best, even if it means lying, killing or changing her identity. Her daughter, Ginny, will try to fit in at her new school and finally have friends to share with. The young teenager feels that every time she arrives in a new city, all eyes are always on her beautiful young mother.

Ginny is a teenager who does not feel identified with people of her mother’s skin color or with those of her father. She mentions on more than one occasion that to African-Americans she is very white, and to those of light skin color, she is not so white. In addition, she shows how comments that are accepted in society are racist, and can be very hurtful to say.

This is a show about a strong mother and daughter relationship where both are very young and they tackle different societal problems. Shows like Ginny and Georgia also feature strong bonds between the main female characters as they deal with different life issues.

Gilmore Girls is the perfect proposal for a dessert on a TV gourmet menu, light but not too light, sweet but not cloying, consistent but not heavy, homemade but not sloppy and original but recognizable at the same time.

The series centers on the life of Lorelai Gilmore and her teenage daughter, Rory. Lorelai became pregnant at sixteen, dropped out of school and ran away from her wealthy parents’ home to raise her daughter alone with great effort and hardship until she became the owner and manager of a small country hotel in the idyllic town of Stars Hollow, Connecticut.

We follow their lives, their relationships and every important event along the way. While more lighthearted this is a perfect show like Ginny and Georgia about a young mother and her daughter.

Trinkets presents the story of 3 teenagers who belong to different social strata, besides having totally opposite personalities. However, they all coincide in a meeting of Shoplifters Anonymous, designed for those who steal compulsively.

Thus a friendship begins to be forged that makes them forget their differences to have a good time, but also to support each other in the most complicated moments. Present day social issues are presented and analyzed while a bond forms between the characters that make this a very pleasant and interesting watch.

Sisters Sterling and Blair discover a passion for bounty hunting after stumbling upon one of their own, Bowser Simmons. The chief bounty hunter agrees to teach them the tricks of the trade, but they must keep their activities secret. And play the perfect schoolgirl in their Catholic school and with their family.

The originality of Teenage Bounty Hunters lies not so much in the secret mission of the two sisters (although it’s not often you meet 16-year-old bounty hunters in real life), but in the choice of location and social setting. Most series that combine female characters, action and humor feature young, white, middle-class American women.

This is a fun show with interesting characters and a very nice dynamic.

Good Girls, a comedy of black humor in which our protagonists are always with one foot in misfortune, out of their element and working for a mobster they really know nothing about. Their greatest power is their condition, they are anonymous, without weight in society, women who go unnoticed and barely make ends meet. They are normal. And that normality is what makes others trust them. Three harmless women who can move more freely than a mafia gang with the look of a CSI prison episode.

The series is funny, behind the implausible situations in which they get involved there is a hidden message. To be poor is to live in pain. To depend on your husband is to be exposed to the fact that one day your whole world will collapse.

Not being the master of your life will make you fearful and dependent on others. But above all, standing up and deciding to be in charge in all these situations gives you a power you didn’t know you had. A perfect show like Ginny & Georgia.

Jen is a sarcastic and histrionic widow who has to deal with a severe economic hardship and take care of her children after the death of her husband, who was run over in strange circumstances in the early hours of the morning near their home. Obsessed with finding the culprit, she constantly berates the police, who in her opinion are not doing enough to bring justice, while pointing out the license plates of all the reckless drivers in her path.

In an effort to find some support, Jen begins to attend group therapy where she meets Judy, an optimistic, pleasant and caring woman who has also suffered a loss and is trying to rebuild her spiritual life. To her surprise, an unexpected friendship develops between the two, even though their personalities are quite different.

As they grow closer, sharing confidences, traumas, projects, responsibilities and many bottles of wine, Judy will try to protect Jen from a shocking secret that could destroy her life as she knows it and will devote more than a little effort to overcome her own contradictions. A funny, dark show similar to Ginny & Georgia that will keep you guessing, but also very entertained.

More TV, Netflix and Amazon Prime shows to watch if you liked Ginny And Georgia: