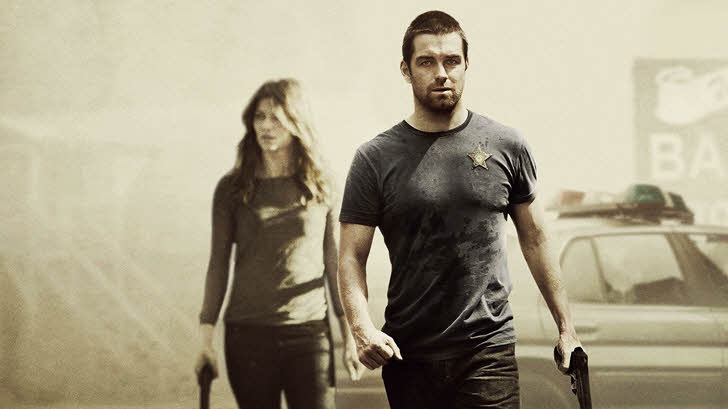 A criminal is released from prison after serving a fifteen-year sentence for diamond theft and on his way out he goes to look for his accomplice and ex-partner who took the jewels.

He finds her happily married with two children in the town of Banshee, under another personality. On his way, by a series of coincidences, he impersonates the sheriff who was supposed to arrive in town, Lucas Hood, and shows up in Banshee to enforce the law, starting a new life.

This is a show about nonstop action, thrills and excitement, that while it has a good plot it makes action its main component. Shows like Banshee focus on good action scenes, thrilling plot lines and cool characters that are easy to like.

Justified tells the story of Raylan Givens, a lawman (U.S. Marshall) who acts like a gunslinger from the Old West. In the first episode, Raylan is transferred from Florida to Kentucky after shooting a criminal he had given 24 hours to leave town. According to him, that shooting was justified, hence the title of the series.

Anyone else would have had a file opened against him but we know how they do it in the USA and, besides, this transfer to Kentucky is the worst thing that could happen to Raylan since he is a native of that state. There he will purge his sins while dealing with his childhood friends, his ex-wife and his father, characters we will meet along the way.

An action packed show like Banshee that will keep you on the edge of your seat.

When our story begins, Jax is the wayward stepson of Clay, president of a biker club. In the aforementioned comparison to Hamlet, we will learn that Clay and Jax’s mother, Gemma, planned and caused the death of Jax’s father.

A manuscript by the man, John Teller, will be the emotional piece that will make the protagonist a positive force for change. That and the love of his youthful girlfriend, Tara Knowles; and his best friend Opie, first who wants out of club life because he understands its power to corrupt the human soul.

These are the eternal themes: power, loyalty, ambition. The club is like a family, a crime family that has their ups and downs, their misunderstandings, their fights and their treachery. Action is always present and drama is front left and center.

Sheriff Walter Longmire, who is having a hard time coping with the death of his wife under strange circumstances, must deal with the crimes and criminal cases occurring in his county of Absaroka in the state of Wyoming, while preparing his campaign for re-election as sheriff.

The approach of the episodes seems procedural at first glance with a case that they must solve from finding a corpse always in strange circumstances in some remote part of the county, which Longmire, had to identify, to proceed with the usual investigation of the environment of the deceased, to find the culprit and the motive for the murder.

The character have great personal conflicts and pending problems to solve among them or with third parties, and the weekly cases allow to advance in their evolution and development in a barely imperceptible way but executed with great mastery.

John Reese is a former CIA agent that lost the love of his life, and now wonders the streets as a homeless person, dejected and uninterested. One day, he has to fend off some aggressors on a train, and thus he gets the attention of an interesting individual.

A rich recluse by the name of Finch offers him the opportunity to use his skills catching criminals by using his invention. A machine that watches everybody – a surveillance apparatus that Finch created and is now in the hands of the government.

In each episode they have to stop a murder before it happens, and they do so by getting their information from the machine. As the story progresses, our characters have to fight off the government and other forces that will come after them. Good action, very likable characters and a focus on the effects of mass surveillance are what make Person of Interest a very captivating show.

The series, set in various locations in Minnesota, has as its main setting the small town of Bemidji, where a young sheriff’s deputy tries to investigate a strange murder, to which a few more are added in the following days.

The first eight episodes focus temporally on a few days in 2006, although there are plenty of flashbacks. However, the series jumps a year in time and takes us, in the last three episodes, to 2007, when the story is resolved.

A show with good action and a great setting make it a natural show similar to Banshee to watch and enjoy!

More TV, Netflix and Amazon Prime shows to watch if you liked Banshee: