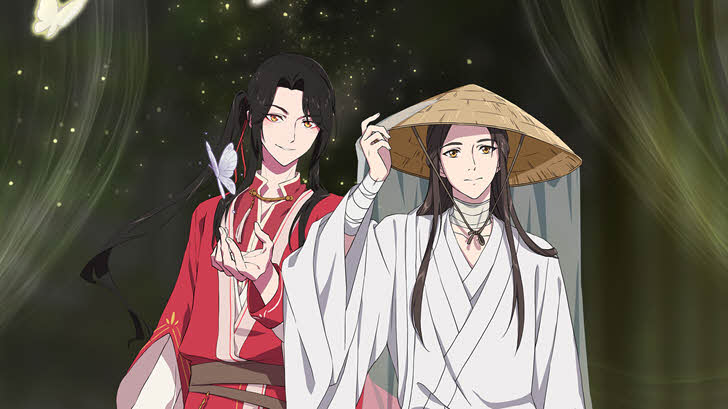 The anime follows Xie Lian, the crown prince of the fallen kingdom Xianle, who just ascended for the position as a god for the third time. He was once knows as a “beloved prince and darling of the heavens” but after two banishments he is just a scrap-collecting god.

In this world the gods listen to the prayers of the mortal world and answer them by banishing the evil thus earning followers and merits. Xie Lian was sent on a mission to mortal land where he meets with Hua Cheng, a most feared demon king among mortals and gods.

Hua Cheng offers his help to Xie Lian, but why is he helping a heavenly official? Can Xie Lian gain worshipers and merits and clear his debts? Why was he banished previously? Know more about such questions in this anime.

If you are looking for Donghua like Tian Guan Ci Fu (Heaven Official’s Blessing), then check out these similar Chinese anime recommendations that we think you’ll enjoy.

The anime follows Wei Wuxian the most feared and hated human who followed the path of Demonic Cultivation. He used the chaos and destruction to bring down the tyrannical Wen Clan. Due to this he was killed by the alliance of stronger clans and his close friend.

However, after thirteen years he is now summoned back by Mo Xuanyu a lunatic who offers his body in exchange for which Wei will have to avenge him. In the process of fulfilling Xuanyu’s wish he meets with Lan Wangji, his former classmate.

Slowly we get to see why Wei Wuxian choose the demonic cultivation method, why did he hate Wen Clan so much, Who is Lan Wangji and what is his relation with him and a lot of other things from his past life.

Both Tian Guan Ci Fu and Mo Dao Zu Shi are written by the same author and animation style, settings and the quality of animation is great. If you are looking of another boys’ love anime like Heaven Official’s Blessing, then Mo Dao Zu Shi would be our first recommendation.

The Donghua follows Shen Yuan who loves to read a lot of Chinese fantasy novels. While reading one such harem novel he is pulled into it and sent to the fantasy world of the novel. However, he is now born as Shen Qingqiu, the scum villain of the novel instead of the protagonist.

Since he already read the novel before, he knows how his story ends in the hands of Luo Binghe his disciple who is the main protagonist of the novel. The anime shows the efforts of Shen as he tries everything to escape his cruel fate.

However, will he be able to change his fate? Will the monitoring system of the new world allow his change in characterization? Can he befriend Luo Binghe and avert the tragedies that befall on him? Check out this show to know answers to such questions.

Adapted for Fei Tian Ye Xiang’s Novel the Donghua follows Kong Hongjun and handsome young man who is unaware of the worldly affairs sent to the world of humans with three important tasks. He reaches the prosperous city of Chang’an where the demons who can transform into humans has infiltrated the highest levels in the societies.

After joining Tang’s Exorcist Department he along with a bunch of other exorcists sets out to vanquish the demons from the mortal world. What are the tasks Hongjun was supposed to do in the human world? Who was his father? What is he hiding? Know answers to such questions by watching this anime.

This is another beautifully made BL Donghua like Tian Guan Ci Fu with amazing 3d animation and music.

The Chinese anime follows You Keika our main lead who was born in the family of famous exorcists. His life changes drastically after the death of his parents and he is now making ends meet by working as a fortune-teller and repairing computers in part-time.

One day he meets Tanmoku Ki, a mysterious silver-haired exorcist fighting an evil spirit. However after getting hit by car he becomes a spirit. Tanmoku Ki ask him to make a soul contract with him and help him fight the evil spirits. Thus starts the beginning of the journey of our heroes.

This was originally a Chinese anime that was later dubbed in Japanese as Spiritpact. A perfect anime to watch if you are looking for a fun BL Anime like Heaven Official’s Blessing.

Xiao Lu He Xiao Lan is a Chinese anime that follows two boys Beryl and Sapphire. These are the main characters of the Donghua, however the story and setting are completely different in each episode. It is more of a 6-minute anthology series (with 27 minute episodes once a week) with a different story each time that focuses on how Beryl and Sapphire encounter each and react.

Not exactly a fan of episodic story telling, however I loved this show, and the way it packs the story and comedy in those six minutes. It’s simple, cute, well animated, heartwarming and very hilarious. This is a fun BL Donghua that we think you’ll enjoy watching.