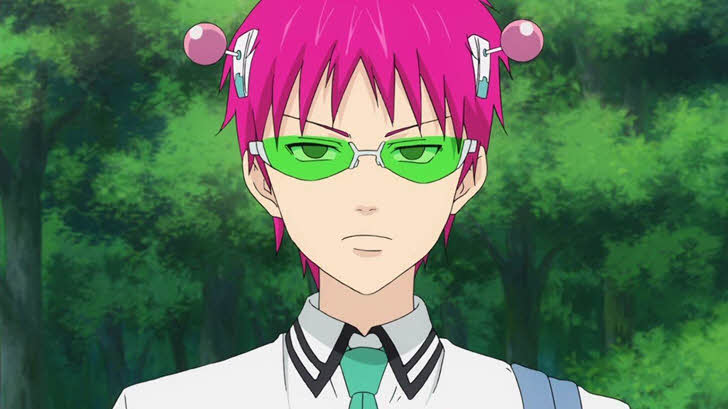 Saiki Kusuo is a high school student and lover of coffee jelly with all kinds of psychic abilities. Because sometimes he cannot control his powers, his brother created antennas in his head that limit his strength.

He uses his abilities to help others without them noticing but for him it is nothing more than a curse because he wants to have a quieter life. New difficulties and characters appear that do not make it easy, but soon he realizes that leading a normal life is much more complicated than he thought.

Anime like The Disastrous Life of Saiki K. have fun out of the ordinary lead characters that are put in funny situations and come out on top.

The story stars the “coolest” student in every high school in existence: Sakamoto. When he arrives at a new high school, he attracts attention not only among his classmates, but also among the entire faculty, so the rest of the jealous students will constantly try to make him look bad.

To their constant surprise, these attempts backfire and only make Sakamoto look even cooler.

This anime stands out more than anything for its simplicity when it comes to telling jokes, this is not a monologue, it is not a theater club, they are simply things of everyday life which our protagonist, Sakamoto, does in such a great way that ends up being funny. A perfect anime like Saiki K. that hits all of the right notes.

Also Recommend: 16 Anime Like The Misfit of Demon King Academy

The story tells us about Kageyama Shigeo, a boy nicknamed Mob because of his lack of sense of belonging, a kind boy, but a bad student, and quite lonely.

Mob works as an assistant to a psychic who exorcises spirits, Reigen Arataka, a hustler with no powers. Mob is the one who is in charge of all the serious cases to finish ghosts because he is a powerful Esper: a person with paranormal powers.

He has a brother named Ritsu, a studious and popular boy at school with whom he has a cordial but distant relationship (who has a hidden resentment for his brother’s powers) and a childhood sweetheart who has forgotten him. A funny anime with a character that has a lot of similarities with Saiki K.

The series follows the lives of three high school students Tadakuni, Hidenori and Yoshietake, who go to an all-boys school and spend their time fooling around with their classmates.

As a side story, at the end of each episode it shows a short film entitled “High school girls are abnormal” which follows the lives of three girls, Habara, Yanagin and Ikushima; who are the counterparts of Danshi Koukousei no Nichijou.

We experience fun moments and encounters as we see more of their daily lives. A funny anime that will keep you entertained.

This anime introduces us to the everyday school experiences of a unique character, Tanaka-kun. In the company of his friends and high school classmates, he gives us a unique perspective on life.

Our hero takes laziness to the highest level in situations both typical (doing homework, playing sports and participating in school festivals) and unthinkable (eating lunch!), within an ever-evolving society that prides itself on constant hard work, while producing laugh after laugh without apparent effort.

In Tanaka-kun is Always Listless there are no plot twists, no complicated storylines, and no philosophical questions that question their very existence. Just good clean fun to pass the time, making it a great alternative to The Disastrous Life of Saiki K.

Handa Sei is the most hated boy in his school. A victim of various forms of bullying, he has learned to create an environment of rejection and isolation that keeps him safe from people in his own little world. Or so he thinks.

He is actually the most popular person in school, and what he has misinterpreted as bullying turns out to be displays of admiration and appreciation, although what is authentic is his refusal to socialize with his peers.

This is the premise for many misunderstandings and funny situations around him. A great anime that is a more than worthy addition to this list.

More Anime shows to watch if you loved The Disastrous Life of Saiki K.: