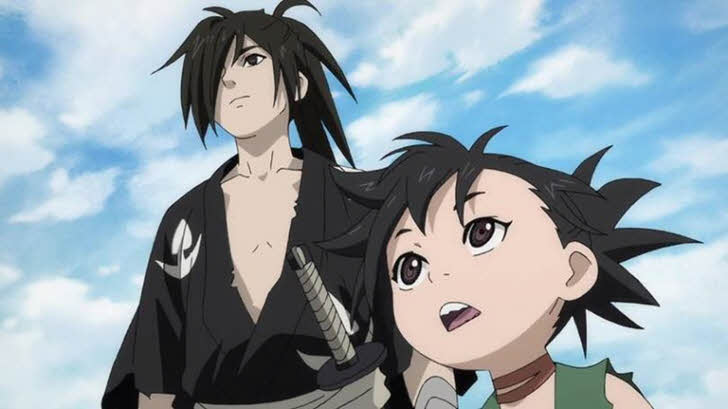 This anime tells the story of Hyakkimaru, who is the first son of Lord Daigo, an ambitious warrior. His father grants the demons the body parts of his newborn son in exchange for the prosperity of his domain. In addition, he asks them to grant him total dominion over Japan.

Hyakkimaru is abandoned to his fate by his father’s order, but as fate would have it, he is rescued by Jukai, an expert prosthetic doctor who manages to take care of him and help him with his wooden prostheses. As soon as Hyakkimaru grows up, he decides to go in search of the demons in order to recover all his body parts.

During this long fight, Hyakkimaru meets Dororo. He manages to save her on several occasions, and so she decides to accompany him, to express her gratitude. She is totally accustomed to dealing with thieves and living on the street since she lost her parents.

That is why her attitude is so affectionate with anyone who helps her. This is a story about overcoming deficits, revenge, love and forgiveness. Great themes that anime like Dororo must all encompass. Below is our list:

1. Sword Of The Stranger

This anime tells the story of Nanashi, a wanderer who carries a sword and a dark past that torments him at night. Kotarou, an orphan boy who escapes from the clutches of a strange organization that wants to take his life, and his dog Tobimaru, the faithful kiba inu who will accompany and defend them throughout the story.

While the first approach and link between these three characters will be given by pure interest, since in an attack on Kotarou by the Ming group, which manages to escape unscathed thanks to the presence of Nanashi, Tobimaru will be seriously injured. With his dog poisoned and no one to turn to, Kotarou offers Nanashi a strange precious stone in exchange for his help.

It is in this way that they embark on their journey, passing little by little from an obvious interest and antipathy to a relationship of friendship based on mutual admiration, respect and affection. A great anime movie similar to Dororo that will give you immense satisfaction.

Fuu, a 15-year-old girl, worked in a teahouse until it was destroyed after a violent three-way fight between Mugen, the vagabond, Jin, the black samurai, and the bodyguards of the son of the village Daikan.

At the end of the fight Mugen and Jin are arrested to be executed the next day. Fuu tries to make a deal with these two individuals; she will help them escape if in return they help her find the samurai who smells like sunflowers.

Things are not so easy though as Mugen and Jin are always trying to take each other down. A story about an unlikely friendship that works.

The plot is set in the genres of fantasy, mystery, drama, adventure and slice of life. It should be noted that the scenarios are presented with historical dyes. We see that the events happen in what would become the ancient Japan and the customs that were seen in that era.

Ginko, a Mushishi, is a traveler who, with his knowledge as a Mushi master, travels around trying to solve the problems of people who get involved with these beings. The “mushis”, in anime mythology, are beings which, although without much form, represent a spiritual symbolism of what would become invisible supernatural mythological beings.

When the Mushishi mix with human beings, it usually represents a problem for the one who attracts them, since these with their supernatural powers bring certain problems for people. Ginko in his journey, meets many people who will mix with these beings whether they want to mix with them or not, and the problems that will bring to these people, Ginko will try to solve them.

Asura shows us a time when Japan suffered terrible wars and famines that led people to commit terrible acts to survive, even resorting to cannibalism, as in the case of the mother of our protagonist, who was about to eat her own child as a last resort to survive.

However, lightning strikes, stunning the woman and saving the baby at the last second. The baby, raised since then by beasts, would show a behavior more typical of an animal than of a human.

The boy, named Asura after a monk he encountered trying to kill him, will devote himself to killing both animals and humans to survive, until he meets a girl named Wakasa who will try to turn him into what he should be: a human. A great anime like Dororo where the main character is an outcast trying to make their way back into the world.

In the future, humanity goes to war with an army of robots commanded by a tyrannical leader named Black King Boss. In the midst of the chaos, humanity’s last hope appears in the body of a young girl named Luna.

Fearing the worst, Black King Boss sends 3 of his most powerful robots to confront Luna: Casshern, Dio and Reda. Casshern, the most powerful of the three, kills Luna and unknowingly unleashes the apocalypse on earth.

Hundreds of years later Casshern reappears after killing Luna with no memory of who he once was and now fights on behalf of the human race seeking to remember who he was. A strong anime like Dororo that tackles themes of morality, revenge and making amends.

More Anime shows to watch if you loved Dororo: