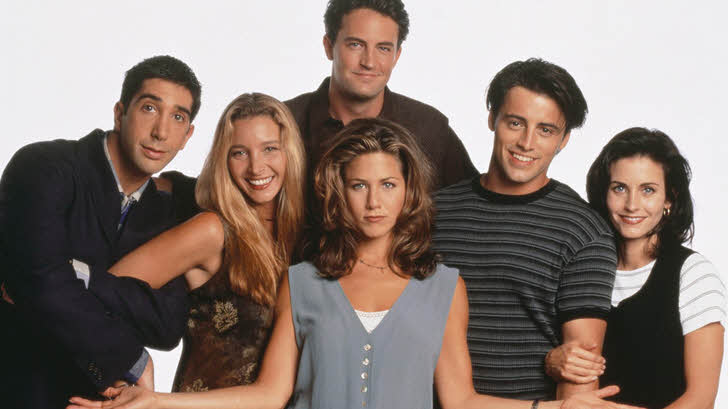 The plot of the story is simple and concise. The viewer follows the daily life of a group of friends, made up of Joey Tribbiani, Chandler Bing, Monica Geller, Phoebe Buffay, Rachel Green and Ross Geller. In each episode we see their love affairs, their problems at work, the funniest moments and the great friendship they share.

But what made Friends such a great success? We are talking about a series that was completed with 236 episodes, loaded with pure comedy from which they managed to get the most out of it. It was relatable, funny and charming, delivering witty dialogue and very likable characters.

Shows like Friends are sitcoms that tick all these boxes while providing the viewer with hours upon hours of laughs.

1. How I Met Your Mother

Being a love story in reverse, How I Met Your Mother is more than your average sitcom. We meet Ted who is a guy who loves to fall in love. He meets Robin and thinks he has found the love of his life, but things may not be what they seem.

Together with friends Marshall, Lily and the womanizing yet charming Barney, we find out the long detailed filled story of how Ted eventually meets the love of his life.

Spanning 9 seasons, with a lot of the action happening in a bar, this is the perfect show like Friends to enjoy if you want something similar. How I Met Your Mother is a funny series that will keep you entertained for days.

Freaks and Geeks is a series created in 1999 but based in the 80s. Siblings Lindsay and Sam Weir lived two parallel realities in high school, her trying to fit in with the rebellious stoners and him avoiding getting beaten up and having his sandwich stolen at lunchtime.

This is a series that perfectly encapsulated the teenage years and how everybody is trying to fit in. The show is funny but also has teachable moments and memorable characters that make you fall in love with them.

Leslie Knope is the assistant director of the parks and gardens service of the city of Pawnee in the state of Indiana.

Hyper-enthusiastic and always ready to initiate new projects in her city, she encounters the incomprehension or indifference of her co-workers whom she must continually motivate to try to make the municipal administration run efficiently as would be her ultimate ambition.

The characters we meet who are her co-workers each have fascinating personalities and add to the hilarity of the story. Each have their quirks and make each episode funny in their own individual ways.

Sheldon and Leonard are two young men who share an apartment and a strong affinity for science. They are geeks who love everything comic book related, and have likely seen every Star Wars movie at least thirty times. They are socially inept and meeting girls seems rather impossible.

Everything changes when a young blonde moves next door, transforming their everyday lives. As the story unfolds, they all learn from each other and expand their horizons.

A classic sitcom with lovable characters and hilarious situations make this another great show similar to Friends to enjoy.

Described as a show about nothing, Seinfeld was a generational sitcom about everyday life in urban America in the 1990s. Jerry Seinfeld is a stand up comedian playing himself, and has a group of friends that each are funny in their own way.

Kramer is the eccentric next door neighbor, George is the unattractive under achiever and Elaine is the girl who navigates relationship after relationship.

Over its 9 seasons, Seinfeld provides hours of unforgettable comedy between this group of 4 friends, which makes it an obvious choice if you’re looking for more shows like Friends to enjoy. They are both similar and different in all the best ways.

More TV, Netflix and Amazon Prime shows to watch if you liked Friends: