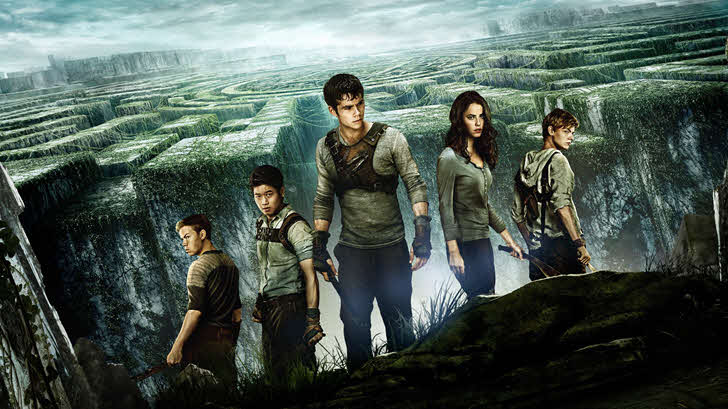 Set in a fictional dystopian society, The Maze Runner contains an interesting story, with enough elements to become a transcendent saga along with others that also focus on young characters in extreme situations who find themselves trying to overthrow the reigning power.

Thomas wakes up in an elevator, which slowly ascends. When the box stops and the doors open, Thomas finds himself in the middle of a group of kids welcoming him to the Glade: a huge open space flanked by giant concrete walls. His mind is a total blank. He has no idea where he is, he doesn’t know where he comes from, and he can’t remember his parents, his past, or even his own name.

They only know that the gigantic concrete doors leading to the Labyrinth open every morning. That every night, at sunset, they close again. And that, every thirty days, a new boy arrives in the elevator. The predictable behavior of the Labyrinth made Thomas’ arrival expected. The surprise comes one week later when the box brings up the first girl.

Movies like The Maze Runner are set in dystopian futures where people have to do out of the ordinary things to survive and try to break the system.

The plot takes place in a post-apocalyptic place known as Panem, which resides in the ruins of what we now know as the United States. Panem is composed of 12 districts and a metropolis known as The Capitol.

Each year, the rulers and wealthy people of the Capitol hold what they call, The Hunger Games: 24 young boys and one girl from each district are forced to participate in this brutal and bloody game. This tool of intimidation and control serves to maintain order and prevent the districts from rebelling as they did 74 years ago.

Our protagonist will have to overcome all odds to attempt to win the games and deliver a shattering blow to the fascist leadership of The Capitol.

A strong story featuring adventure, romance and a captivating mystery make this a top choice for fans of movies like Maze Runner.

In a not too distant future, post-war humanity has divided its society into 5 groups, 5 clans or 5 factions: Abnegation (Forget about you. Others will be your priority), Truth (Everyone will be able to trust you, your sincerity will have no limits), Cordiality (you will be a reference of understanding and peace), Erudition (the search for knowledge will be your whole life) and Daring (you will protect the city from enemies. Tirelessly without any fear).

But what if you are a bit of each and tend not to agree with the ideas and social, cultural or economic trends of one group or another? Then in the future you will be considered a Divergent, a danger to the new and difficult society that has been established.

The Host tells the story of how the appearance of a terrifying and brutal creature unleashes chaos in a city, causing the death of numerous people. In one of its appearances, it takes a little girl with it, before the helpless eyes of her father.

Although at first she is presumed dead, it is soon discovered that this is not so, that the girl is alive and is in some hidden place where the monster deposits the people it will later devour.

Thus begins, on the part of the girl’s family, a desperate search, hindered by the work of the government, more concerned with washing its reputation and creating a smokescreen, than solving the real problems of citizens. And the fact is that, despite what it seemed at first, the greatest danger lurking for the protagonists of the film is not the terrifying creature, but the political power and its foolish actions.

In ‘Ender’s Game’ we see a humanity that is recovering from the invasion of an alien race called Formics, which after overcoming a second incursion, thwarted by a pilot named Mazer Rackham (who becomes an icon of this war), decides to train the most intelligent children on the planet.

This is how Ender Wiggin, 12 years old is chosen to train at the Academy, to be part of the International Forces and face the Formics in a third and final battle.

However, Ender distinguishes himself from the other cadets by his great ability to strategize and anticipate: he easily differentiates enemy movement patterns in the numerous tapes of the previous battles and recognizes important details within the human alignments that could not be seen by an adult. Soon, he will have to overcome every obstacle to win this crucial fight.

Thousands of years ago, a cataclysm destroyed civilization as we know it today. Humanity has had to adapt to this new post-apocalyptic era, developing a new way of life. Now the threat is giant mobile cities that mercilessly besiege smaller populations.

Tom Natsworthy is a citizen from a lower level of the great mobile city of London who will have to fight for his own survival after meeting the dangerous fugitive Hester Shaw. Two polar opposites, whose paths should never have crossed and who forge an alliance destined to change the future of humanity.

A stunning movie like The Maze Runner that will keep you on the edge of your seat throughout.

More Movies To Watch If You Loved Maze Runner: