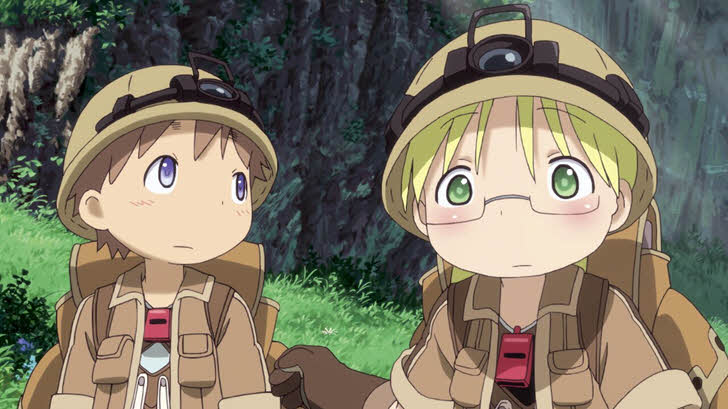 The story of Made in Abyss follows the life of Riko, an orphan who lives in the city of Orth. On this island is a strange hole called the “Abyss”. Within the abyss are creatures and the coveted abandoned artifacts, remnants of ancient civilizations.

The Cave Raiders are in charge of exploring the abyss to get the relics. Riko’s goal is to become a great explorer like her mother, but one day exploring the abyss she finds herself in danger and an android named Reg will come to her rescue. We will live a story of friendship in which we can discover the plants and secrets of the abyss as our heroes try to reach the bottom.

Made in Abyss is undoubtedly a survival series, and anime like Made in Abyss have similar survival, exploration or bravery themes.

Best Anime Shows Similar to Made in Abyss:

It has been a long time since human culture, which had prospered, came to an end. At the end of the world, most of humanity has disappeared; even the other living creatures have almost entirely vanished. Now the cities look like complex labyrinths of ruins with no one to maintain them, so everything looks abandoned.

In this world, where no one wonders when the end happened or why it happened, two girls continue their journey without a destination. Today, Chito and Yuri wander through the ruins in their beloved Kettenkraat. Thus begins this fantastic and dystopian adventure about the end of the world.

Throughout the series dilemmas, ethical issues, and many existentialist questions are posed to us indirectly in a very light way, making this a stunning anime like Made in Abyss that will make you think along the way.

Hunter x Hunter chronicles the adventures of Gon Freecss, a boy who grew up under the care of his aunt, believing his parents were dead.

After an unexpected encounter, Gon discovers that his father is alive and that he is one of the best hunters in the world.

But to become a hunter you must pass a test to prove your abilities. The exam tests battle, survival and teamwork skills. It is during this test that Gon meets other participants who will accompany him on his adventures, as friends or enemies.

The story focuses on 6 young people who arrive in a fantasy world totally unknown to them without remembering anything of their past only their names. In this world they have to survive by becoming adventurers using armor and magic, forming guilds or teams to collaborate in battle.

They form a team even though they are a bit weak, each one focusing on a different type of art. Together they will fight their way up the ranks as adventurers, suffer and celebrate every moment they spend together making their way through the adversities of this world called Grimgar.

Sometimes an overlooked gem, this is a great anime like Made in Abyss that has all the right ingredients.

Several kids who grow up happily in an orphanage. They lead a quiet, peaceful and comfortable life, with a mother who takes care of them all as if they were her own children and gives them love and the hope of being adopted. However, Emma and Norman realize that all is not happiness at Grace Field House when they attempt to deliver a forgotten stuffed animal to a little girl whose time has come to leave the orphanage.

As the children embark on this mission, they realize that everything is a lie. The orphanage is a farm that offers the best humans 12 years old or younger as saucers for creatures that have a reptilian form.

That “Mother” has deceived them all the time and her only goal is that they grow up happy so that their brains have a better taste and the worst that they are condemned to certain death since the farm is surrounded by a very high wall and escaping their fate will not be easy. A journey of exploration of discovery similar to Made in Abyss.

Baam is a teenager who wakes up after a long time in a dark and cold cave. The only thing he sees in the distance is the presence of a woman who guides him to understand a little of who he is and why he exists. However, Rachel has other plans. Legend has it that people can climb the tower of God and whoever reaches the top will be able to make any wish and the king will be obliged to grant it.

Rachel’s plan is to abandon Baam and climb the tower to see the stars from the top. A glow appears and the entrance doors open accepting the girl and a desperate man who does not want to be abandoned again by the only person he knows. He will accompany her to the end of the world; it is his promise to himself so they are both teleported to the first test. And that is where the adventure of our protagonists begins.

Quite an exhilarating anime similar to Made in Abyss that takes our characters on an unusual but character developing journey.

More Anime to watch if you loved Made in Abyss:

6. Kaiba
7. Nausicaä Of The Valley Of The Wind
8. Somali And The Forest Spirit
9. Children of The Whales
10. A Place Further Than The Universe
11. Attack on Titan
12. Shadows House
12. Puella Magi Madoka Magica