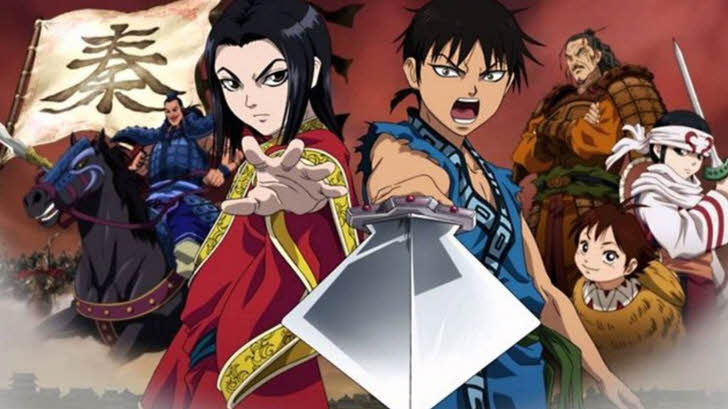 We are in the Period of the Warring Kingdoms, an era of ancient China in which the Asian giant was divided into seven kingdoms immersed in constant conflicts. At this time Xin and Piao are two young orphans who dream of one day being more than mere servants and become great generals.

One day both are forced to separate when Piao is surprisingly recruited to work in the royal palace of the Kingdom of Qin by a minister of the king.

After a fierce coup d’état, a Piao more dead than alive manages to reunite with Xin, with a request for him to meet Ei Sei, the young rei of Qin who bears a striking resemblance to his now deceased friend. This meeting being the first step for Xin to fulfill his dream and begin his dangerous and bloody path on the battlefields of an era full of conflict.

An action packed story, anime like Kingdom are based on historic events, are action filled and have brave characters that fight for a noble goal.

1. Beyond The Heavens (Souten Kouro)

The corrupt Han Dynasty has brought chaos to the whole country, and now the peasants are rebelling against the government. This is the time when the infamous and ruthless hero Cao Cao Mengde is born. Destroying old customs and values, he attempts to unite China, with a group of promising followers and intellectuals chosen for their individual talents and potential.

The anime is a work of action and adventure of historical and demographic seinen with a good dose of violence, which takes us from here to there during different key moments and battles.

He meets those who will end up becoming his allies, friends, followers, enemies and rivals, characterizing the cast for being composed mostly of male characters who stand out for their grandiloquence that make women faint at the mere sight of them. A very fun action packed military anime like kingdom to enjoy for hours.

There are seven stars in Heaven, the Seven North Stars, one for each of the Celestial Heroes. They rule the Fate, they mark the cycle of the Sacred Beasts. They form the Warriors.

In Heaven and Earth, there are yin and yang, as well as two antagonistic stars in the north: Tonro and Hagun. They are the two stars that rule the Earth. And Taito, without knowing it, is one of those two stars.

Once again, the author of Fullmetal Alchemist, Hiromu Arakawa, brings us a story of self-improvement, friendship, energy and political intrigue: Hero Tales.

3. The Heroic Legend Of Arslan

In the kingdom of Pars, Arslan is a reigning prince who is betrayed by his collaborators and overwhelmed by the black magic of the kingdom of Rucitania.

Fortunately, Arslan manages to escape alive from Pars and manages to create a group of five courageous allies (a priestess, an exiled warrior, a dangerous minstrel, an intellectual artist and his assistant) to try to regain the throne.

This colorful group must face an incredible army of more than 300,000 soldiers led by the mysterious Lord of the Silver Mask.

In the Sengoku period, Japan was divided into semi-independent provinces, ruled by feudal lords, also called daimyos, who engaged in an endless struggle for power.

The ambitious daimyos from all parts of the archipelago were making their war cry manifest. As the war spread throughout the country, the map of power underwent very rapid and drastic changes. One man however manages to take control of the country and his name is Oda Nobunaga.

But now, a young general dressed in light blue makes his appearance on the confusing stage, leading a powerful cavalry from the northern provinces. His name is Date Masamune and he is in search of Oda Nobunaga’s head and ultimate supremacy. A fascinating war anime like Kingdom that you need to watch if you haven’t already.

Also Recommend: 20 Anime Like The Rising of the Shield Hero

The story takes place in Tokyo, during the year 2039, 10 years after a virus called “Apocalypse” attacked Japan, a period known as “Lost Christmas”, now controlled by a multi-nation organization called GHQ.

Ouma Shu is 17 years old and gains special powers, the Mark of the King, when he meets a girl named Yuzuriha Inori, who is the lead singer of “Egoist” and a member of the resistance. These powers give her the power to materialize people’s hearts into weapons.

The story manages to grab you, through epic action scenes and small gags about conflicts of justice.

More Anime shows to watch if you loved Kingdom: