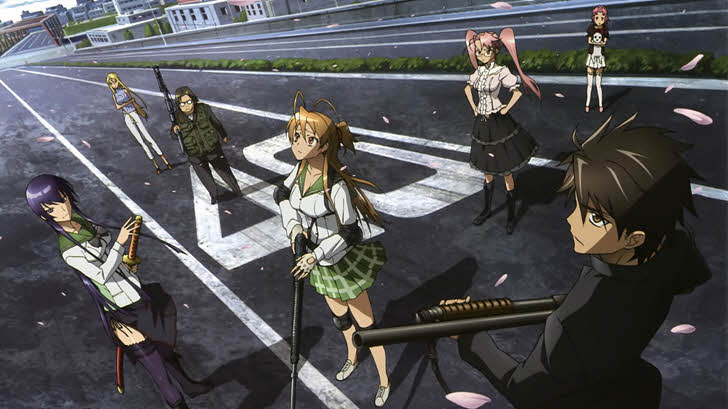 The world has been decimated by an unknown pandemic that transforms people into ghoulish zombies through bites. The story follows Takashi Komuro, a student at Fujimi High School who survived the initial outbreak along with some students from his school.

They become friends and together they try to stay alive, first as they escape from the school and later as they travel through the city in search of weapons. Will they be reunited with their loved ones?

This zombie apocalypse anime has a captivating story, so if you’re loving the genre and want more anime like Highschool of the Dead, then these are our most recommended alternatives:

Best Anime Shows Similar to Highschool of the Dead:

The anime starts with the simple story of four girls and their teacher who live happily in their high school helping others… That’s what the School Life Club is all about… But appearances can be deceiving.

The cruel reality is that Japan has been hit by a zombie apocalypse, and these girls seem to be survivors who have to isolate themselves in their high school in order to survive… Something that Takeya Yuki (our protagonist) does not accept, she wants everything to be nice and normal, and wants everyone to follow along.

With another zombie apocalypse as the main precursor, and the action happening around a school, this is the perfect anime like Highschool of the Dead to enjoy!

The plot follows the adventures or missions of the royal Protestant organization Hellsing which is dedicated to exterminate any vampire that could become a risk to England.

Ganta Igarashi, is a high school student of about 14 years old and is one more of the thousands of orphans and refugees from the catastrophe that destroyed Tokyo.

His life goes by peacefully until one day a character dressed in a straitjacket and chains, wearing a helmet and a blood-red cape, bursts into his classroom. Without time to digest the situation and before falling unconscious, Ganta sees how in a few seconds the character in question brutally murders all his classmates and attaches a strange crystal to his chest.

He wakes up in the hospital, and is now found guilty of the attack. He is sent to prison where he will have to escape his death sentence. A very original anime similar to Highschool of the Dead with good action and interesting plot twists.

Perhaps one of the few boys attending Kuoh Academy, Issei Hyodo’s life goal is to be a “Harem King”, or to have a relationship with several women.

A rather complicated task for anyone who has a bad reputation among the girls in his school.

However, this in no way affects his self-esteem or stir the crazy desire to get a date with a girl. So much so that Issei will even be able to have a meeting with Amano Yuma. Blinded by what he thinks is luck, the boy does not even realize what is about to happen.

Oori Kagami is a boy who is moving out of the orphanage where he grew up, so as not to be a burden anymore. One night, a strange cat takes him to a Buddhist temple, where he finds a girl lying on the floor and upon approaching her, the boy realizes that she is dead.

Surprised by the discovery, he hides when he hears some noises, seeing with surprise how an acquaintance of his, Keisei, enters the room and after hugging the girl, she revives and opens her eyes.

The girl’s name is Makina Hoshimura, and in reality she is not a simple schoolgirl. Her duty is to remain hidden so that when required she can eliminate some strange beings that move among humans: the shikabane (practically undead). With similar plot and interesting characters, this is another top recommendation for fans of Highschool of the Dead.

More Anime shows to watch if you loved Highschool of the Dead: