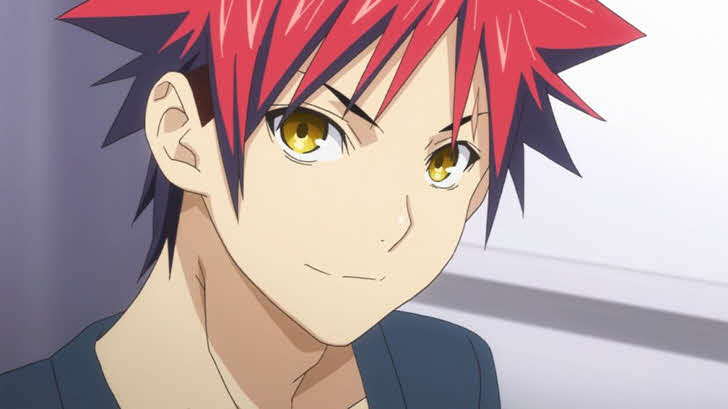 The story centers on Yukihira Souma, a boy who works with his father in a family restaurant. One day they decide to separate and his father enrolls him in the best culinary school in Japan: Tootsuki private school.

At the introduction of the new students, he surprises them with his way of challenging his own classmates, saying that he will be the best in the academy. From then on, the story becomes more and more nuanced, and new characters appear to support or make Souma’s life impossible. Will he achieve his goal of becoming the best cook in the world?

If you enjoy anime like Food Wars! Shokugeki no Soma, we’ve compiled a list of the best similar anime that have cooking, or food related plots, with characters that receive good development along the way.

As she improves in her kitchen, Ryou begins to understand why her food doesn’t taste good. The “koufuku” in the title is a Japanese pun on two homonyms; one means appetite and the other happiness. A simple, warm anime about food which fans of the genre will enjoy.

In this story the world is basically governed by food and the pleasures that this causes, for this reason an institution has been created, the IGO (international gourmet organization). They are in charge of bringing these foods to the people and thus hiring “Gourmet hunters” to search for the most exquisite ingredients and also the most dangerous to get.

Toriko is a Gourmet hunter whose dream is to achieve his “complete menu” which is like a kind of resume where he shows both the food he has managed to get as well as the most delicious. He has a partner named Komatsu who seeks to be the best chef by cooking what Toriko gets him.

Things get more complicated because of another organization called the “Bishokukai”, whose purpose is contrary to the IGO: Obtain the ingredients but only for themselves and thereby create their gourmet empire. In a way, this anime like Shokugeki no Soma (Food Wars!) takes things to the next level, and is a very fun series to watch.

Nicoletta arrives at Casetta dell’orso in search of her mother. At the age of 6 she was left by her mother in the care of her grandparents because she could not marry the man she loved if he knew she had a daughter.

So, at the age of 21, she goes there determined to tell her mother’s new husband everything, but once there, she changes her mind when she falls in love with the food and, finally, with those who work there. A funny story about love for food combined with romance.

After passing the Guangzhou Special Chef Trials, Mao decided to travel around China to learn more about preparing unique foods. Upon his return, he will learn that the real battle has just begun. The Underground Cooking Society has already begun to move against him.

To honor his mother’s wishes, Mao and his friends have to go on a journey to attempt to defeat the Underground Cooking Society. Great show about cooking with very likable characters and a must try if you are looking for anime similar to Shokugeki no Soma.

The story introduces us to a very poor student, named You Satou, where one ordinary day decides to eat a half-price bento, fainting at the time of taking it.

The next day he is found unconscious in a hospital room. When he wakes up without remembering anything of what happened, he goes to school and meets a classmate he had met the day before his “accident”.

He ends up discovering that at night there are wars, in all the supermarkets, to take the bentos with discounts. He also finds out that there are people called “wolves” which are the ones who fight for the bentos.

He also meets Sen Yazuri, a wolf known as “The Ice Witch” who is president of the “Half-Price Bento Lovers” club, a club he forces Sato to join and be part of the bento wars. When looking for more anime similar to Food Wars!, Ben-To is an obvious choice as it’s literally about a war on food.

Also Recommend: 15 Anime Like The God of High School

More Anime to watch if you loved Food Wars! (Shokugeki no Soma):