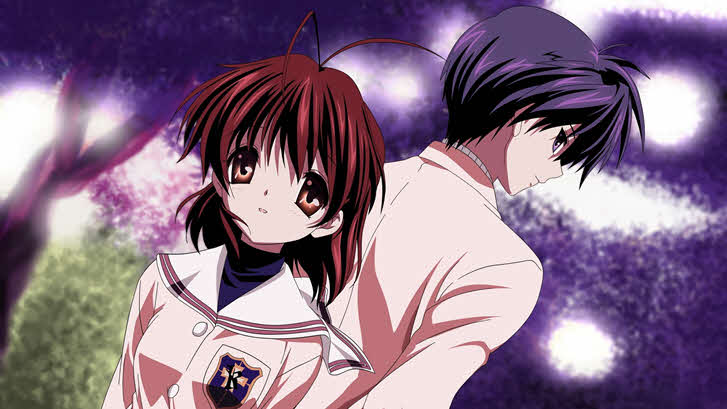 Clannad is a special anime that every fan should watch for many reasons. It is full of life lessons, it is emotional, exciting and, far from what other anime are. Clannad teaches you the reality of life: that not all stories end with an “and they lived happily ever after”.

Clannad tells the story of Tomoya Okazaki, a third year high school student who, unfortunately, is down on his luck: his mother died when he was young, and as a result his father falls into depression and gambling.

Once he meets Nagisa Furukawa, a junior high school student like himself, things start to change. A friendship begins between the two, thanks to which they make many new friends who will help them with their problems and to achieve each other’s dreams.

Anime like Clannad are emotional, romantic and funny. They focus on characters and their relationships and how they grow over the course of the story. Here is our best anime like Clannad:

1. Your Lie In April

This 22-episode anime tells the story of Kousei Arima, a piano prodigy who, after the death of his mother, lost the ability to hear his own music. Now, immersed in a monotony that is only broken by his friends Tsubaki Sawabe and Ryouta Watari, he is a simple 14-year-old high school student.

Everything changes when he meets Kaori Miyazono, a passionate violinist who reawakens his heart to music and love.

This anime does a great job of building chemistry between its quartet of protagonists – Kousei, Kaori, Tsubaki and Ryouta. It also introduces other characters in a natural way, without overly affecting the dynamics of those four. A heartfelt anime like Clannad that you will certainly enjoy.

Akari Shinohara and Takaki Tono’s lives drifted apart on the very day they finished elementary school. Despite the special feelings they harbored for each other, Akari’s parents moved to another city and the distance forced them to keep in touch through letters.

A year later, Takaki travels by train in adverse weather conditions to be reunited with Akari. But the inexorable passage of time separates them more and more until the letters stop arriving and all contact ceases.

Even so, Takaki cannot get the thought of meeting her again out of his mind, which prevents him from interacting successfully with the world and the surrounding people.

Angel Beats takes place in a small world where teenagers who died feel that their life was not fair.

One night Yuzuru Otonashi wakes up in this world without any memory, and immediately meets Yuri Nakamura who informs him that he is dead and asks him to join a resistance front. The goal is to rebel against God because of their experiences in life.

They fight against Kanade Tachibana, president of the student council, an angel who tries to make everyone lead an orderly life in the school. As Yuzuru begins to develop feelings for Yuri, the mysteries of this world begin to unravel.

Kanon tells the story of Yuichi, a boy who returns after seven years to the city where he spent a summer he can’t remember anything about. There he lives with his aunt and his cousin, Nayuki, a very kind and funny girl who sticks to the sheets.

Yuichi arrives there confident that he will have a quiet life there, like any other student, but his kind personality and his instinct to help others, will not let him rest a single day.

Yuichi will meet a series of girls with different problems that he will not be able to avoid helping. He will also meet Tsukimiya Ayu, a girl who seems to be very connected to his past from seven years ago, just like her cousin. But poor Yuchi doesn’t remember anything, and that will bring him even more headaches…. Besides, why does it seem like everyone is hiding something? A fun, romantic anime like Clannad with a touch of mystery!

Yukito is a young traveler who makes a living with a magic and puppet show and travels through villages looking for a winged girl who lives in the sky, a story his mother told him when he was a child.

One day he arrives in a small coastal town where he meets Misuzu, a girl he soon befriends and who takes him into her home. Over time, Yukito meets other peculiar characters (they are all girls, who are implied to feel an attraction beyond mere friends for him), with whom he deepens his relationship.

At the same time with Misuzu, he discovers things that give him clues as to where he can find the winged girl he has been looking for. A fun romantic anime like Clannad which will stay in your memory for a while.

More Anime shows to watch if you loved Clannad: