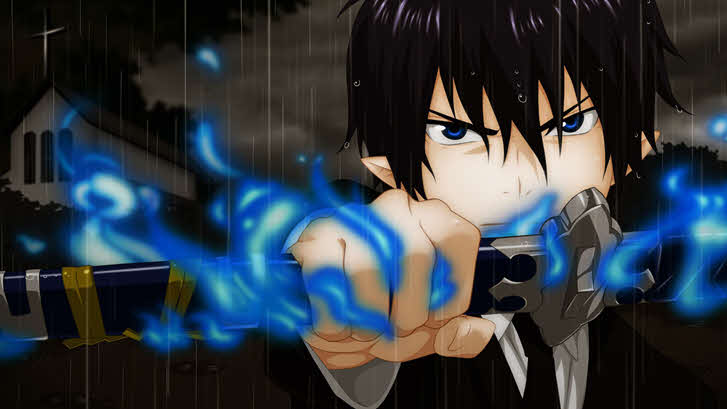 The world of Blue exorcist has two parts Assiah – the world of humans, and Gehenna the world of demons. The only way of travel from Gehenna is by possessing a Human in Assiah. Many such demons wander the earth in disguise and exorcists are the ones assigned to cleanse them.

The anime follows Rin Okumura a troublesome teenager raised by Father Shiro Fujimoto, a famous Exorcist. Rin discovers that he and his younger twin brother Yukio Okumura, are the sons of Satan. When Father Shiro dies while protecting him from Satan, Rin promises to become a powerful exorcist and kill Satan.

In order to achieve this Rin joins the famous exorcist school “True Cross Academy” where he must master his abilities and defend the human world from Satan and his demons. Check out our list of recommendations for more anime like Blue Exorcist (Ao no Exorcist).

Set in 19th century the anime follows an organization of exorcists known as Black Order that defend the humanity from Noah Family and Millennium Earl who captures the souls of dead and turn them into Demons known as Akuma. These souls are trapped forever and the only way to release them is to exorcise them using anti-akuma weapons known as “Innocence”.

Our protagonist Allen Walker completes his three years of training at General Cross and joins the Black Order as an official exorcist. Allen’s metal arm acts as his Innocence that evolve over time and the cursed eye that can see the sufferings of the trapped souls inside the Akuma, with the help of other exorcist he must stop the Millennium Earl’s from destroying the humanity.

Similar to blue exorcist this anime protagonist too is an exorcist that uses his powers to exorcise the demons and saving the humanity. In comparison, D.Gray-man is a bit darker than blue exorcist but the story so good that we think you will enjoy it more.

Yato is a minor deity who dreams of having a large number of followers who will worship and pray for him. However, his dreams are far from reality, as he does not have a single shrine dedicated to him. To make this worse, his only weapon partner feds up with him and resigned.

His fortune changes when he meets Hiyori Iki, a high school student that saves him from an accident. After this incident, Hiyori soul becomes loose and leaves her body and this becomes a regular phenomenon. She asks Yato to change her into normal girl and accepts to help him until then.

Together with Hiyori, Yato will do everything to gain recognition, fame and perhaps a shrine dedicated to him as well. A highly addictive anime like Ao no Exorcist that we think you’ll surely enjoy.

The anime follows Staz Charlie Blood, a powerful vampire and the ruler of Eastern district in the surreal “Demon World”. The rumor’s portray him as a bloodthirsty monster, but in reality he is an Otaku obsessed with human world and the Japanese culture.

Fuyumi Yanagi, a normal girl accidentally ends up in that demon world through a portal and meets with Staz. Yanagi gets killed in an accident when his territory is attacked and she is now a ghost.

Staz take responsibility for her untimely death and promises Fuyumi to resurrect her back to life no matter what it takes and take her back to the human world himself, something he always wanted to do.

The purpose of Death Weapon Meister Academy is to make powerful weapons known as “Death Scythe” for the Shinigami and it is headed by the Lord Death himself. The anime follows three groups of students from this academy each a weapon master and a human weapon, Maka Albarn and her weapon Soul Eater Evans, Black Star and his weapon Tsubaki and Death the Kid and his twin pistols Patty and Liz.

Soul Eater Evans, aims to become a Death Scythe and in order to do so he must eat he souls of 99 evil humans and one witch’s soul. All three groups of students competes with each other, take on missions to collect evil souls and protect the city from the threats.

Just like Blue Exorcist this show too is set in a school setting where the students train becoming powerful in order to fight the supernatural forces of evil. This is an amazing show with spectacular action choreography, eccentric characters and similar art style.

5. Seraph of the End (Owari no Seraph)

Set in a post-apocalyptic world where a mysterious virus killed all humans over the age of 13 in a matter of minutes, leaving only the children. At the same time the vampires make themselves known and enslave the survivors promising protection in exchange of their blood.

Most of these children have resigned themselves to live this way, but not Yuuichirou. Along with his best friend Mikaela Hyakuya, he plans to escape from there with the other children from his orphanage whom he considers his own family.

However, his plan fails as he is the only survivor to escape while his family is killed by the vampires. Moon demon company takes Yuuichirou in and trains him to become vampire killer. After years of training he finally joins the Japanese Imperial Demon Army and vows to kill all the vampires from the face of the earth that killed his family.

More Anime Shows To Watch If You Loved Blue Exorcist (Ao no Exorcist):