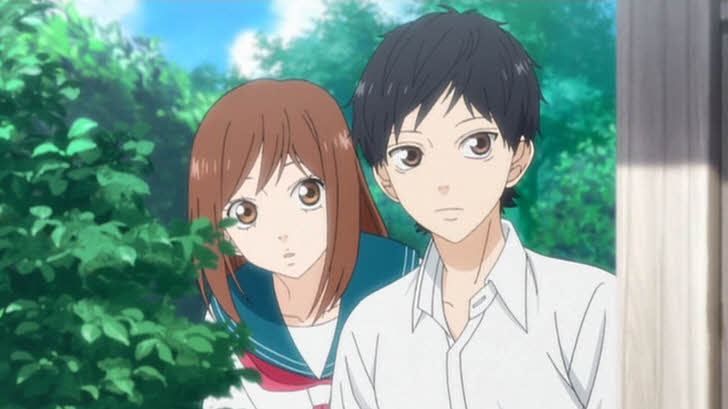 Futaba Yoshioka was a sweet, shy, very feminine girl, who hated the rough behavior of any boy, but one day she met Kou Tanaka who was similar to her and they began to like each other. But because of life’s problems, Kou disappeared and they never met again.

Years later in high school, Futaba has changed completely, now she is coarse, she doesn’t want to be feminine because the other girls marginalize her and she doesn’t want to be alone. So one day, Kou shows up at school again, he is cold and rude to her and makes her see that her life is not really what she wants and the fights begin.

Will they manage to make true friends and leave the falsehoods behind? Will Futaba be able to find her true personality? Will love emerge again? Anime like Blue Spring Ride (Ao Haru Ride) focus on complex love stories that evolve over the course of the show.

Sawako Kuronuma is a very kind but socially not very competent high school girl, who thanks to her shyness and her resemblance to the girl in the movie The Ring, has led her to be the center of countless rumors that label her as a kind of supernatural being that brings bad luck to anyone who interacts with her.

After establishing a relationship with Shouta Kazehaya, the most popular boy in class who secretly has a crush on her, the girl will gradually manage to get along with her classmates, gaining some very good and loyal friendships in the process.

Little by little the girl will be able to manage to develop herself in front of her classmates, gaining in the process some very good and faithful friendships, and managing to show herself to others as she really is.

The story centers around Erika Shinohara, a shallow 16-year-old girl who tells her friends about her romantic exploits, even though she doesn’t actually have a boyfriend.

She claims that a handsome boy in a photo is her boyfriend, but it turns out that the boy is a high school classmate named Kyouya Sata. She now has to keep pretending that he is her boyfriend to not be caught as a liar.

Unfortunately, Sata may seem like a sweet person, but he’s actually a sadist with a super black heart. So Kyouya decides to profit from the situation and treat Erika like dirt. But things will soon change and their relationship will become something else.

3. We Were There (Bokuraga Ita)

The story revolves around two high school kids who meet, “hate” each other and, as expected, quickly fall in love.

At the beginning everything moves very fast, since the plot is mostly based on the development of their relationship and not so much on the first part of getting to know each other; but, as we get to the middle of the anime, the situation becomes very heavy.

There is cheesiness, drama and an unhealthy relationship between Nana and Yano that develops over time. A very interesting anime like Ao Haru Ride (Blue Spring Ride) that has many similarities.

The story revolves around two young people: A girl, named Koizumi Risa, relatively tall for her surroundings and a boy, named Atsushi Otani, rather short. They have been known as All Hanshin Kyojin (a Japanese comedy duo, one tall and one short) ever since their teacher started calling them that on their first day at high school. From the beginning this caused a conflict between the two, who ended up getting along badly.

As they both had trouble finding a partner, Otani, who was interested in one of Risa’s friends, realizing that Risa liked a boy from the summer classes, proposed to her to put their differences aside to help each other. From then on they started to get along better even when they fought frequently, and discovering that their favorite singer is the same.

Thus they become closer and closer, getting to the point where their friends wan to make them a couple.

Charlotte shows us a group of teenagers trying to overcome their problems, which are caused by their own condition: having superpowers.

At first it’s not very different from anime set in a school, with a protagonist who is forced to join a club, and then try to solve the problems that come their way.

Of course, all this happens while introducing the characters; explaining their initial motivations and the relationships they come to forge, along with giving some information that will be used later to move the story along. The way their relationships grow and evolve are central to the story, making it a great anime similar to Ao Haru Ride.