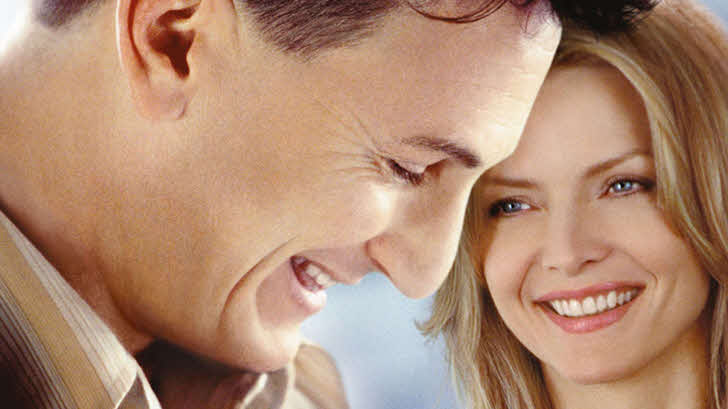 The film begins as a middle-aged mentally handicapped man, Sam (Sean Penn), welcomes his daughter Lucy (Dakota Fanning) into his arms in a hospital maternity ward. The mother, a homeless alcoholic, soon disappears from sight. She flees in fear of what she sees as a fateful future: raising a child without resources and in the company of a stranger who barely knows how to add up. Surprisingly, Sam manages to get by with his job as a barista at a Starbucks.

Things get complicated when young Lucy grows up: her questions become more and more difficult for her father and he begins to demand a different bedtime story, one of those with few illustrations and difficult words. A drawing at school, just before her seventh birthday, sets alarm bells ringing: she draws herself bigger than her own father. Her teachers decide to alert the social services so that they can evaluate the little girl’s family environment.

This is a movie about overcoming tough circumstances even if life has dealt you a bad hand. With some awesome performances and a great cast, movies like I Am Sam follow difficult families, friendships or relationships where you have to overcome hardship to succeed.

From a very young age, Forrest Gump’s cognitive abilities are affected by an impairment, which is called “borderline” and whose IQ is below normal. But that doesn’t mean Forrest cannot achieve great things.

Even as a kid using aids to stand up and walk, Forrest is optimistic about life and doesn’t let anything affect or discourage him. He meets Jenny, a girl who lets him sit next to her on the bus one day, and a difficult love story begins. As Forrest grows, we experience various episodes from his life, and the teachings he and us the viewer take along the way.

We see a man who had everything going against him succeed at almost every turn, even though it is not without loss. An instant classic and a movie you should absolutely watch if you want more movies like I Am Sam to enjoy.

Charles Babbitt is a young man who sells imported Lamborghinis. When he is informed of his father’s death, Charles goes to Cincinnati to attend his funeral and take care of his inheritance despite the fact that he has not spoken to him in years.

But when he goes to the reading of the will, he finds that he is only left the Buick that separated them and the right to exploit his prize-winning rose bushes, leaving the rest of his assets, which amount to more than 3,000,000 dollars, in charge of an administrator for the care of Raymond, a brother whose existence he was unaware of until that moment, and who lives in Walbrouk, a psychiatric institution.

A journey of growth begins for Charles who will learn more from his brother than he ever thought possible.

Joanna Kramer suffers a personal crisis and decides to leave her husband Ted Kramer, who must take care of their son Billy. The family begins a path to dissolution: Joanna leaves, Ted is a workaholic, and caring for Billy is a challenge. It’s a matter of time before everything inside their world blows up.

The movie presents a great evolution of the characters, whose process is reflected not only in what each one says, but also in certain cyclical scenes that show the changes that have occurred.

In terms of story, there are no loose ends, and we enjoy some great acting from a very strong Academy Award winning cast.

Tells the story of Mary, a seven-year-old girl born into a family of gifted children. Her mother, Diane, considered one of the most promising mathematicians of the twenty-first century, had devoted herself to an unsolved Millennium problem, the Navier-Stokes equations.

Her grandmother, Evelyn, was doing mathematical research at Cambridge University until she became pregnant with Diane and dropped out. Mary’s uncle Frank, with whom she has lived since her mother’s suicide, worked as an assistant professor of philosophy at Boston University, although he is now busy repairing ships at the dock.

It is no wonder, then, that Mary, at the age of only seven, demonstrates an uncanny knack for mathematics. However, Frank, his niece’s legal guardian, is unwilling to allow the girl’s life to be spoiled by science, which happened to his sister and Mary’s mother.

Quite the contrary, instead of developing her exceptional gift, he is determined to give her as normal a life as possible that a seven-year-old girl should have.

Also Recommend: 12 Movies Like The Wolf Of Wall Street

Ben was a wonderful horse rider, whose talent is now being wasted for the benefit of millionaire men. He is in charge of Sonya, an excellent mare at the track, until she suffers a fatal accident. Her owner despises her and she is bought by Ben who, together with his daughter, will try to bring the now prostrate animal back to health.

The essential character of this film is its simplicity and unpretentiousness. Dreamer is an absolutely noble, tender film that revolves around the family nucleus, the basis of its values and the story of a little animal in trouble. From start to finish it is easy to get ahead of the events of its drama; however, there is no discomfort with the predictable element that frames the film.

The fact that it doesn’t bother is due to the great way the story is told and the director’s good handling of rhythm, space and time. An amazing movie similar to I Am Sam that will leave you thinking about a great many things.