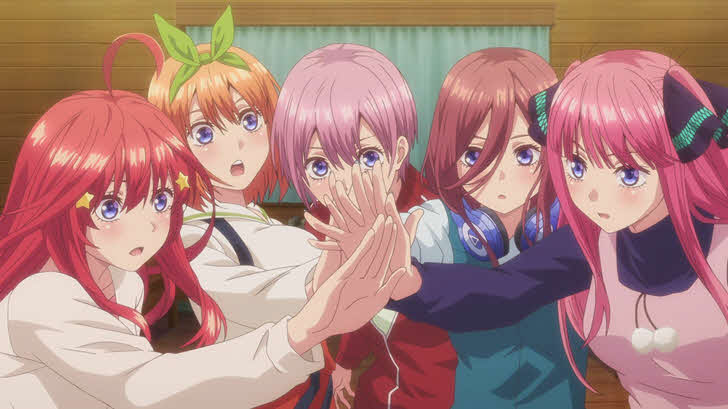 A simple premise sets up a fast-paced romantic story: Futaro Uesugi, the protagonist, is a talented student who belongs to a humble family. One day he meets Itsuki, a young woman who has transferred into his class and who ends up asking him for help to study. Everything will change when he gets a job as a private tutor not only for Itsuki, but also for her four twin sisters who, like her, have a disastrous academic record.

The story deals with Uesugi’s approach to this wealthy family, the quintuplets’ family rapport, as well as the differences between them and the protagonist’s inclusion in the group. Not all of them are happy with a stranger becoming part of their lives, unlike other sisters who will want to get to know Futaro better and will create love bonds as the series progresses. A fun anime about relationships and learning from one another.

Anime like The Quintessential Quintuplets (5-toubun no Hanayome) focus on groups of young people who are sometimes related that go through a learning process or that come from modest backgrounds and want to make something of themselves.

This is a youth drama that will show the evolution and personal growth of several kids. All the characters are the main character. You too, will surely be able to find someone with whom you can connect your feelings, and this is why this is the best anime like The Quintessential Quintuplets to watch.

It has great comedy and romance that will keep you entertained and wanting more.

Nariyuki Yuiga is an average high school student, striving to get a full scholarship to college. So when he is offered one in exchange for tutoring three of his classmates, he accepts without a second thought.

What he doesn’t know is that he has to teach the school’s three geniuses: Fumino Furuhashi, a genius in literature but lousy at math; Rizu Ogata, a genius in math but lousy at literature; and Uruka Takemoto, a genius at sports but lousy at everything else. The series will show us their funny daily lives and the relationships between them.

The series is pure fun, even the animation has a more cartoony style, where the characters exaggerate the expressions they make all the time. With a tutor at the center of the action, this is an obvious must watch for fans of anime similar to The Quintessential Quintuplets.

Ichijo Raku made a promise as a child to one of his many childhood friends. Raku is now in high school, does not remember the face of the girl with whom he made such a promise, and before him rises not only the nostalgia of such memories but the dilemma of what relevance to give to a childhood promise.

He now has Onodera, whom he has loved since high school but might not be the girl of his so-called first love.

Tachibana arrives from one day to the next and claims to be the girl of that promise. Our hero has to decide who he made the promise to, and who he really wants to be with in this nice romantic anime.

Sakura Chiyo is in love with Nozaki-kun. But when she decides to confess, she ends up telling him that she is his biggest fan and in return she receives… an autograph.

Umetaro Nozaki is a well-known mangaka who publishes monthly shoujos. He only thinks about his work, and is quite clumsy, always misunderstanding poor Sakura.

In this very funny anime we follow Sakura’s misadventures as an assistant to Nozaki-kun’s staff, trying to get him to love her and be together.

5. Baka And Test: Summon the Beasts

We are in an unusual school, where elitism, exclusion and the promotion of social differences are the basis of a healthy education. Students are separated into different classes from A to F, the latter being the most idiotic ones… or rather, of low academic achievement.

A scoring system is involved in this school, which besides exposing the students with lower performances and delegating them to a life of more school deprivation, can grant even more privileges to the higher strata, this with an advanced technology that allows to invoke a kind of fantastic avatars whose connection with their owners is much more intimate than you can imagine.

We follow the characters as they navigate the school and form unexpected relationships along the way. Another very strong anime like 5-toubun no Hanayome (The Quintessential Quintuplets) that you won’t be able to stop binging.

More Anime shows To Watch If You Loved The Quintessential Quintuplets: