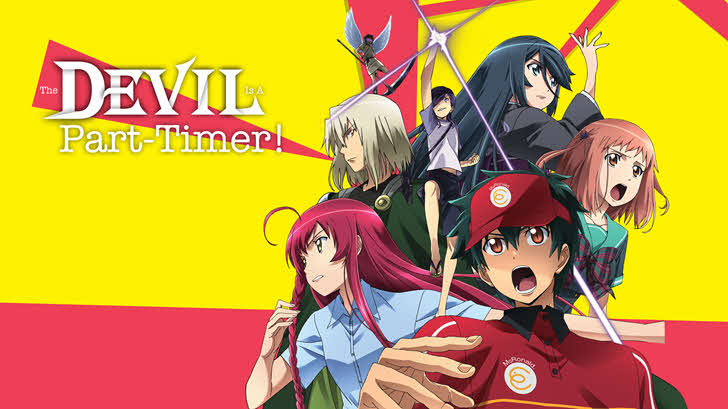 The Devil Is a Part Timer! is a simple, funny and, above all, very entertaining anime. It presents us with an uncomplicated story, which is not very long and is perfect to have a good time when we want to watch something light. Despite its simplicity, it has a pretty good and consistent plot base.

The demon king Satan dominates Ente Island, but due to his confrontation and near defeat against the heroine Emilia, Satan is forced to retreat and flee, ending up in the Tokyo of our world. Together with his faithful servant Alsiel, they have to adopt human identities and learn to live in the real world for a change.

Anime like The Devil Is a Part-Timer! (Hataraku Maou-sama!) Showcase funny plots, lovable characters and usually revolve around a sudden change of environment.

Best Anime Shows Similar to The Devil Is a Part-Timer!:

Blood Lad tells the story of Staz, a head vampire of a district in the surreal “Demon World”, which is haunted by the culture of the human world, and Fuyumi, a normal girl who accidentally ends up in that world through a portal.

Later, after meeting each other and after some mishaps, Fuyumi is killed by a carnivorous plant and becomes a ghost. This makes Staz take responsibility and promises Fuyumi to bring her back to life no matter what it takes.

With a lot of great comedic moments and charming main characters, Blood Lad is a great anime similar to The Devil is a Part-Timer to enjoy!

Yato is a minor god who dreams of having a large number of followers to worship him and say prayers for him. Unfortunately, his dream is far from coming true, as he doesn’t even have a single shrine dedicated to him.

To make matters worse, the only partner he had to help solve people’s problems has just quit. His divine luck could only change when he stumbles upon Hiyori Iki, a high school student. After being involved in an accident, Hiyori becomes a semi-ghost.

In trouble, the girl decides to stay with Yato until he manages to regain his former state as a human. Together with Hiyori and his new shinki Yukine, Yato will do everything he can to gain fame, recognition and just maybe, a temple dedicated to him as well.

The story is about a big juvenile delinquent, Oga Tatsumi who attends a school for “people like him”. But one day while beating up other delinquents near a river, he sees a man floating in the river, who suddenly splits in two, and a baby comes out of him.

This baby is the son of the demon king who was sent to destroy the earth, and Oga was chosen to raise him along with the baby’s servant Hilda. The story follows the life of Oga Tatsumi with the child and the school for delinquents. Quite an original anime with a lot of captivating moments.

Also Recommend: 16 Anime Like The Misfit of Demon King Academy

In Blue Exorcist there are two dimensions linked similar to a mirror. The first world is where humans live, Assiah. The other is the world of demons, Gehenna. It was impossible to travel from one world to the other, as there was no connection between the two dimensions.

However, demons have been able to reach Assiah to rule it. Satan is the god of the demons, but there is something much more powerful than him: it is a container that is in the human world.

To try to destroy it, Satan creates Okumura Rin, half demon, half human… but will he accept his father’s plans or act on his own?

This is a story of love, magic and battles with the action moving around Sai Akuto. He is simple boy who aspires to be part of a high position in the country’s order of magicians, and contribute to society. His dream is to one day become a High Priest and help do a lot of good.

The day he is admitted to the Constant Academy of Magic, his aptitude test predicts the following: “Future occupation…. Demon King” – quite the opposite of what he wishes to be. His life will thus become difficult at school where some will resent him while one mysterious girl won’t.

A very interesting anime where you’ll fall in love with the main characters as you uncover its mysteries. Another perfect alternative to The Devil is A Part-Timer!

More Anime shows to watch if you like The Devil Is a Part-Timer:

6. Yusibu: I Couldn’t Become a Hero, So I Reluctantly Decided to Get a Job
7. Aesthetica Of A Rogue Hero
8. Maoyu: Archenemy & Hero (Maoyu Maou Yusha)
9. My Bride Is A Mermaid
10. Working!!
11. KonoSuba: God’s Blessing On This Wonderful World!
12. Gabriel DropOut