13 Anime Like Rascal Does Not Dream of Bunny Girl... 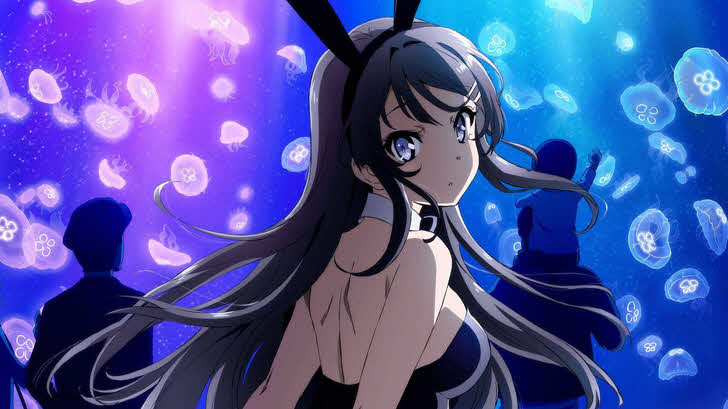 To speak about Rascal is to speak of a series for which the protagonist is not solely and exclusively Azusagawa Sakuta – the boy who is always involved in every arc and problem – but the syndrome of puberty. The euphemism by which the series explores themes such as bullying, social anxiety or the search for identity.

The uncertainty that ultimately we all feel at some point in our lives but we do not manage to externalize (at least not easily). Seishun Buta has little or nothing to do with the image it may initially arouse.

It is not a harem; it is not an ecchi story. Its large cast of girls does not comprise a long selection of damsels in distress sobbing for male help. This is not the case. Rascal Does Not Dream of Bunny Girl Senpai is a series, a story that, although sometimes clumsy in its presentation, breaks in a way with those topics and tries to be something more.

Something that, at least in a first contact, tries to hook by assuming a different and capable proposal. Anime like Rascal Does Not Dream of Bunny Girl Senpai (Seishun Buta Yarou wa Bunny Girl Senpai no Yume wo Minai) cover interesting topics on a wide range, but do so with the intent of educating the viewer as well as entertaining them at the same time.

Best Anime Shows Similar to Rascal Does Not Dream of Bunny Girl Senpai:

Hachiman Hikigaya, our protagonist, is an antisocial guy with no friends. He doesn’t care about coming off as the bad guy, and he doesn’t mince words: he says everything he thinks from A to Z. His dream is to not work, and thinks youth is a lie.

We are then introduced to Yukino Yukinoshita and Yui Yuigahama , the two girls from the Volunteer Service Club where he is sent. Yukino is smart and serious, who also doesn’t mind speaking her mind, and Yui is a nice girl, who tries to get along with everyone. These three will develop a pseudo-friendship, with a somewhat weird dynamic. They will try to make Haki see life differently.

A very deep and interesting anime like Rascal Does Not Dream of Bunny Girl Senpai that should be watched by any fan of this anime.

The story introduces us to 5 high school students (3 girls and 2 boys) who one day begin to exchange bodies. Then the teacher in charge of their club appears, possessed by a strange entity who calls himself Fusen Kazura.

He tells them that the strange phenomenon is produced by him and that it will not stop until he runs out of entertainment.

Then issues such as romantic proposals, family problems, the exposure of fears and traumas of the characters and all kinds of headaches will begin to emerge. Our characters will become stronger and more wiser as the series unfolds.

3. The Melancholy Of Haruhi Suzumiya

The story is narrated by a high school student, Kyon, who on his first day of school, meets the eccentric Haruhi Suzumiya, who is only interested in talking to aliens, time travelers and people with special powers.

Although Kyon is a normal boy, he manages to capture Haruhi’s attention and, thus, they form a club whose purpose is to locate people with the aforementioned characteristics. We follow them on a series of adventures and life changing events that will help the characters develop.

A very interesting anime similar to Rascal Does Not Dream of Bunny Girl Senpai (Aobuta) which you shouldn’t skip.

Tomoya Okazaki is a typical high school student, who wastes his time, doesn’t stand out much, and is a bit of a passerby.

One day, he meets Nagisa Furukawa, an awkward, naive and dangos-fanatic third-year student. She tells him that she wants to present a play during the school festival, but she has no acting experience.

At first Tomoya thinks she is crazy, but then he decides to help her in her attempt to form her own drama club. This way, they get to know new people and at the same time, strengthen the bonds between them.

5. The Pet Girl of Sakurasou

The story revolves around the life of a boy named Kanda Sorata, who attends Suimei High School for the Arts. He is forced to move into the Sakurasou Dormitories, as they are the only dorms that accept pets, since Sorata’s weakness is not being able to abandon any cat he finds.

In order to keep the cats, he chooses to move into these dorms, which have the reputation of housing the most infamous people in Suimei High School. Some of these people include Misaki Kamiigusa – a cartoonist and anime producer, with excessive hyperactivity being classified as an alien, Jin Mitaka who is an exceptional Scriptwriter, being in charge of the scripts of the Anime made by Misaki, and also classified as a first class Womanizer, as he is always seen with different women.

Sorata’s goal is to find a home for the cats he has collected, and thus be able to leave the Sakurasou Dorm as soon as possible and get away from these strange people. But not everything goes as expected and our hero will have to learn that on his own. A fun anime like Seishun Buta Yarō (Rascal Does Not Dream of Bunny Girl Senpai) that isn’t what you expect.

More Anime To Watch If You Loved Rascal Does Not Dream of Bunny Girl Senpai: