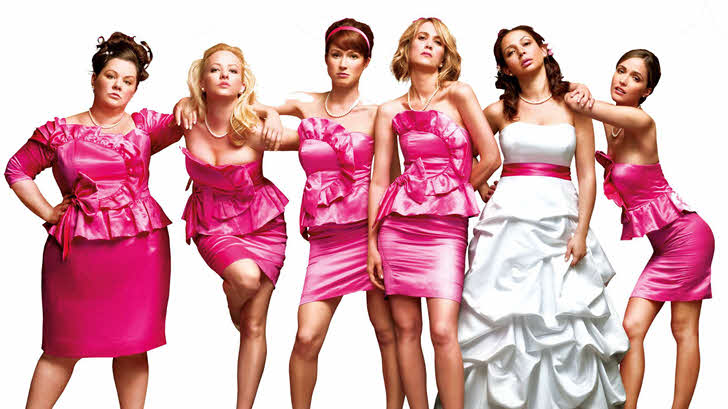 Annie’s life is a mess. But when she learns that her best friend is engaged, she immediately becomes Lilian’s maid of honor. And even though she’s been in love and then had her heart broken Annie will work her way through the weirdest and most expensive wedding rituals.

With only one chance to make it perfect, she’ll show Lillian and her other bridesmaids just how far she’s willing to go for someone she loves. This hilarious movie which aimed to be the women’s version of The Hangover delights audiences with witty comedy, surprising twists and some very risky but effective humor.

Movies like Bridesmaids are comedies with female leads that will make you laugh for hours on end while also including a little romance and usually a wedding.

The night before an old friend’s wedding, three bridesmaids are looking for a little fun but find much more than they bargained for. With the lovely Becky about to marry her handsome boyfriend, Dale, the rest of the high school gang gather for one last bachelorette party in the Big Apple.

Regan is the super bridesmaid, secretly upset that she’s not the first to get married, while Lena is a snarky yet also secretly romantic and Katie is a pretty bimbo who loves the good life.

But when Becky insists that the bachelorette party be light, the girls throw their own party. Things get wild real fast. If you want more movies like Bridesmaids then this is definitely the closest alternative.

The Heat follows in the footsteps of FBI agent Sarah Ashburn, who has a special talent for finding where drug traffickers hide their drugs.

To put away a dangerous kingpin, she must join forces with Shannon Mullins, an extremely foul-mouthed Boston police officer who doesn’t hesitate to use brutal and unsavory methods if necessary to put criminals away.

The movie relies on a familiar hallmark: the foul language typical of male films used by women in similar comedies. And that makes it a worthy watch if you’re a fan of movies like Bridesmaids.

A wedding at the Plaza Hotel in New York marked Liv and Emma’s childhood. For twenty years they have not stopped dreaming and saving to have a wedding just like that memorable one.

Liv is a successful lawyer and Emma is a schoolteacher. When their respective boyfriends ask them to marry, the countdown begins.

Everything in this is about luxury, compulsive consumption, beautiful people, friendship and love, mixed with a good amount of humor and romance.

Tom is a real winner. His business allows him to make great friends and no woman can resist him. However, despite his flirtations and colleagues, he never forgets Hannah.

She is a girl with whom he has always shared a great friendship, because the two were aware from the first moment of the many things they had in common and how quickly they created a very close bond between them.

When she decides to leave for Scotland on a business trip, he discovers that he misses her very much, that he has a lot of mixed feelings inside him and that he is even determined to ask her to marry him to spend the rest of his days by his side. Convincing her will take a lot of effort!

The story revolves around Julianne, a food critic who lives a life of work and zero love with her gay best friend George. Overnight she receives a call from her ex-boyfriend Michael who tells her that he is getting married that same weekend with the woman of his dreams, a rich heiress named Kimberly.

From this situation Julianne tries to do everything to stop the wedding and that Michael comes to his senses and chooses her instead. The situation becomes increasingly unpleasant, on the one hand she likes the new girlfriend of his ex and best friend and on the other hand has commitment phobia, all this coupled with the fact that for a part of time pretends that her friend George is her fiancé.

A classic romantic comedy with lots of laughs, perfect if you’re in the mood for more movies similar to Bridesmaids.

More Movies To Watch If You Loved Bridesmaids: